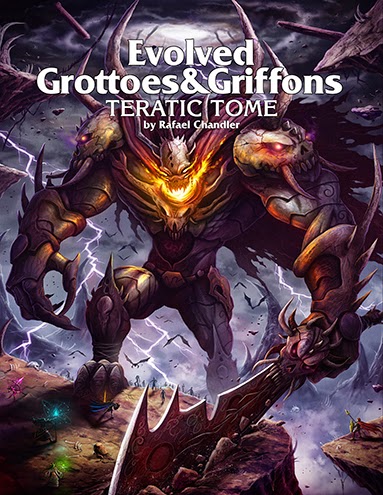 I've been eyeballing this thing for a long time. Fresh off my devouring of the Dungeons & Dragons 5th Edition Monster Manual, I am still in the mood for more monsters. Particularly monsters that I can use in the weird 70's version of D&D, Dungeon Crawl Classics.

The Teratic Tome is a "pay what you want" pdf. That's always a conundrum. I could pay one cent, right? But then I think about this poor person who slaved over this thing. The suggested price is $6.66. Is even that enough? Should I pay more? After much struggling, I just paid $6.66 and downloaded the thing.

You can look at it and buy it right here.

I am going to go through this book and pick out the stuff that I find the most interesting. I won't discuss every monster, just the highlights.

The first thing to notice is that this book is made in the style of the old AD&D Monster Manuals, right down to the font. It is very cool. The cover is fantastic, too, and I'd say it is as-good if not better than most of the 5e covers so far. My only complaint is that I think the tiny heroes on the cover should be a bit bigger so they are more easily noticed.

Nudity and Gore: This book has lots of naked people. I will put dice on the naughty bits of the images that I use in this article.

A lot of the monsters in here are butt-naked and/or very violent and gory. There's a lot of "cut you up while your cousin watches" type stuff.

When I was younger, I was a bit more tolerant of over-the-top violent stuff. As I got older, I met more people who have been affected by real-life tragedy and now things like this aren't "fun". I play games to get away from depressing things like that.

This book uses the OSRIC rules, which I believe is very similar to the old AD&D rules. The book even talks about "Target Armor Zero" aka "TAZ", which seems to be exactly like AD&D 2nd edition's THAC0.

Acronical: We start off with an insect-type creature... that kills adulterers. They can smell a cheater from miles away! It nabs both of the adulterers and makes them fight to the death. The survivor has their limbs cut off. The Acronical sings love songs as the person bleeds to death.

Uhhh. Well we are starting off with a bang here, aren't we? Pretty awesome. In case you are wondering, this monster leaves behind a watery orange stool.

Agonist: This is a sexy demon lady who does whatever she can to humble those too full of pride. She's OK. Cool art!

Baskra: This fellow is a nine foot tall fetus that feeds on the elderly. It "...feeds on their regrets and memories of missed opportunities". I believe the art of this guy is one of the only times I have seen a monster's scrotum. This can go in the hall of fame next to my "balrog with a wang" mini.

Chimaera Queen: She is a unique entity who creates manticore and chimera children that worship her. She lives on a range of snow-capped mountains where her children can roam free. She kind of looks cooler than she is. She brings victims to her dungeon, where she hunts them. I'd have liked a little more backstory. Who is she? Where did she come from? How does she make her kids?

This book has new demon lords! That is always fun. Let's see what we've got...

Abyzou: She's another Succubus Queen like Malcanthet (D&D) and Nocticula (Pathfinder). She is a dark-haired 12 foot tall giant with claws and hooves. She has these undying victims, "the lustful damned" who are subjected to "acts of depravity and sadism". This book is so dark, I can barely see it.

Beleth: A giant bee-devil that loves to gamble. Sounds goofy but it is actually pretty awesome.

Gusion: She is a starved lady with an "Anguish Engine". So bleak...

Phenex: This guy likes to eat young clerics and virginal humans. He sends his ghouls to get him food all the time. He wields an intelligent cudgel that hates dwarves. You could do a lot with this guy.

In the Devil section, there's some Lords and Ladies of Hell. Apparently in this cosmology, devils are trapped in a plane called Mictlan and are at war with a death-god named Mictlantecuhlti. Here's two of the main devils...

Ahriman: The ruler of devils. He lives in this floating crystal palace. Check out this flavor:

"The structure, devised by the legendary architect Mulciber, is particularly striking at dawn, when an enslaved phoenix is lashed to a great disc of copper and hauled into the sky. Agony fuels Cardiodynia, which sprays blood on the imps and lemures below as it floats above the feces-caked steppes of Mictlan."

Well damn, I can't even wrap my head around this. Feces-caked steppes?! An enslaved phoenix?! Crazy.

Verrine: He is a spider-guy who "stinks of urine". He leads the armies against the death god.

Dragon: The book details 10 Venerable Dragons who "regard themselves as a weary decadarchy". There's all sorts of cool ones, like a vermilion dragon and a porphyrous dragon. I guess my favorite is...

Uchorah-Thanaphor: A huge black dragon whose arrival is receded by weird weather. Random bolts of lightning strike buildings and structures. The earth rumbles. Classic! You could apply some 5e lair actions outwardly to help make this work. 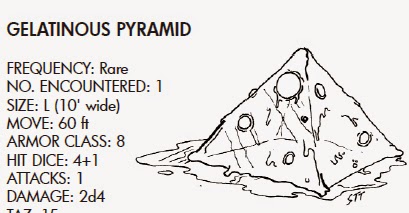 Gelatinous Pyramid: Yup! It has several translucent eyes and it "maintains a latrine where it ejects any inorganic materials that it has absorbed."

Goblin Princess: This is a very cool idea. She has maroon skin and yellow eyes and she can cast spells. Goblin Princesses always try to expand goblin territory through spies and subterfuge.

Thanks so much for the review! Looking forward to the next part.

Rafael: I just posted part 2. Thanks for the comment, I admire your creativity!