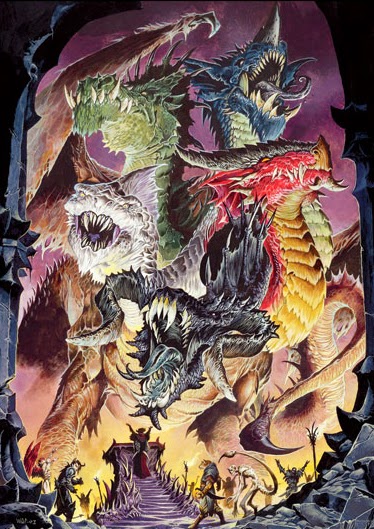 We had another good session at D&D Encounters. We finished Episode 3 and took a little nibble out of Episode 4.

Last week we had a couple less players show up. This week, we lost even more. The other two tables had 3 players each. I think, at least around here, 5e has peaked. The owner told me we might go with two tables from here on out.

I don't think this should be cause for alarm for the world at large. That's how it goes in this game store. The drop in attendance doesn't have much to do with 5e, but rather the way things are done in our store. We have some issues with noise, problem players and... well.. just think of some unpleasant gaming experiences you've had at a convention or public game and you get the picture.

The adventurers only had a few rooms left to explore. When preparing, I was worried we'd get through this really fast. Looking at Episode 4, I saw it needed some fleshing out. It is fairly involved. It turns out just a couple rooms filled an entire 2 hour session. In room 10, the heroes had killed the drakes and the kobolds. I decided to use the roper, but since I was worried that it was too deadly (it's bite does 22 points of damage!) I set it up so the roper wants food. If the PCs attack it, then we'll have a fight. If they do something clever, like toss it a drake carcass, no fight necessary.

The adventurers ended up fighting it, but they backed out and fed it a drake.

There's dragon eggs in here. They are 3 feet tall and weigh 150 pounds! Our 4th grader plays Dark the Dragon Sorceress (who has the blood of black dragons coursing through her veins!) was very excited about this.

I should note that one of the three eggs is hidden in a dark corner. It just so happened that during the battle with a roper, a rogue hid right next to it and thus spotted it.

I was a little concerned with the possibility of the PCs cracking open these eggs and killing the babies inside. The adventure has a fairly gruesome description of the consequences of this, seemingly designed to make the heroes feel conflicted about what they'd done.

Killing a baby dragon might not be something appropriate for a 9 year old. I assumed her dad would know the best way to handle this and I'd play off of him. 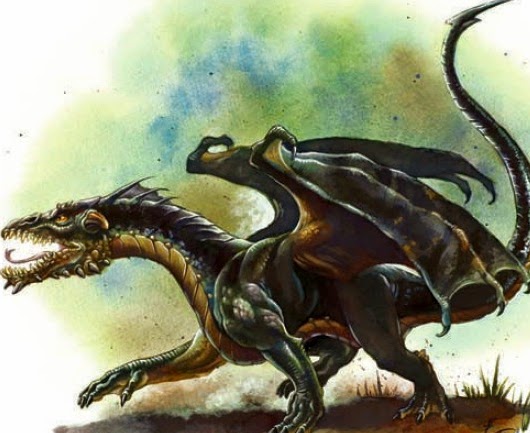 Welp. Her dad wanted them dead. And this poor little kid yelled "No! They're innocent!" as our heroes took a crowbar to the eggs. I was definitely a little uncomfortable. She wasn't super-upset, but it didn't feel good.

They killed two and kept one. Dark, with her mighty 15 strength, hauled that egg around and guarded it carefully. I am determined to have this thing hatch and be her little buddy. I even have a wyrmling mini all ready.

After that, we had a cool fight in a tunnel. Long story. Basically, the leader Frulam Mondath was shooting spells down a shaft at the PCs while her guards assaulted them in a hallway. It was awesome. Frulam ended up getting away, which I did not expect.

Our heroes looted the place, found a map showing the bad guys plans, and rescued the monk. I don't really get what the point was of having the monk want to stay captured in Episode 2, it kind of throws a wrench into Episode 4. Nothing major, it's just a bit awkward.

We basically stopped there. Somehow all that took a full two hours. 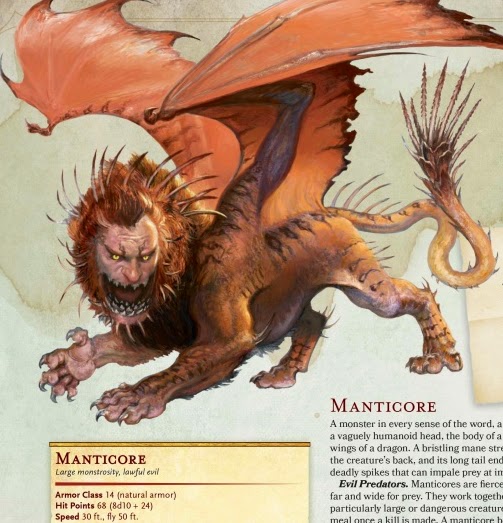 Episode 4 has this big dead spot in the beginning involving a lot of travel and no encounters. Seems like a good time to put my monster manual to use! The heroes have a 6 day trip on horseback to Elturel. I decided that a Manticore would harass them through the whole trip.

I wanted to show them that D&D is more than just fight-kill-loot. I wanted this monster to hit and run. I wanted them watching the skies, fearful as their horses reared up - smelling the creature on the wind.

I want the manticore to hunt their horses. This makes things more fun, as the PCs don't need to fear for their own lives. I want them to see that the creatures in the game have their own motivations - they are not just numbers on a piece of paper or monsters standing in a room waiting to be killed.

I wrote down the range of every ranged weapon in the game on a sheet. The manticore could fire spikes from 100 feet away without penalty. The heroes can fire back, but they'll likely have disadvantage and their ammunition will dwindle quickly. We'll get to it next week. I hope it works out. I'm pretty sure it will. Ultimately on day 5, they'll spot it chasing a griffon and they'll have the chance to take it down for good, and maybe even befriend a griffon.

Overall this was a good session. I wish I had done something else with the dragon eggs, though.
Posted by Sean at 4:25 PM

I love how every read through i've done of this episode has been so drastically different. I ended up kidnapping mondath and whisking her away from murderous forces >_>

ZealotDane: Yeah this adventure is really wide-open. That I think is not ideal for what wizards wants from their public play program, but it makes it more fun for everyone else. I have no idea what the PCs are going to end up doing with Frulam...

I was asking myself why Frulam have 8 hit dice if it just level 5 cleric. I'm sure that she's multiclassing but we have not the information about that.

why she can make 2 attacts
shy se doesnt have domain spell and ability ?

(sorry for my englisg is my second language)

so i just need your thought about this.