Hoard of the Dragon Queen - Perytons

I went into the session of D&D Encounters tonight in a lousy mood. But once I entered the store, I was bombarded with positivity. It was really crazy and reminded me of how lucky I am.

As soon as I entered, I was greeted by about a dozen people - men and women, children and adults, players from my youth and people I've just met. They all were genuinely happy to see me and they wanted to talk to me. I had one player come up to me and hand me these awesome printouts he got off of reddit of rules charts for 5th edition. 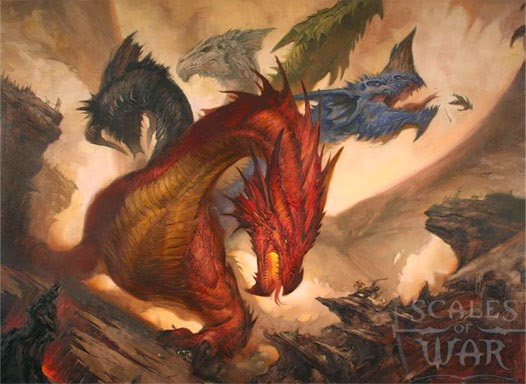 A player who had played in my game store Scales of War campaign showed up tonight. He had moved down south in around 2010 and is in town visiting. He jumped in on my table tonight. His at-the-time girlfriend had played in one session of Scales with us, and in that session her warforged ended up buried in rubble for all eternity. They got married, and on the back of their wedding invitations was her warforged's hand exploding from the rubble. Pretty awesome!

We had a total of 18 people, which is more than last week. The other tables are really rocking and rolling... everyone seemed to have a great game going tonight. It was quite something to see.

Last week I went on at length about how the store owner wanted to talk to me about "getting on the same page". I was worried that he was going to want me to stop my game until the other groups caught up. It turns out my concerns were completely unfounded. He just wants to make sure there's always a low level game going. So basically, if more newbs show up, I will run a session for them either after my normal group is done or I'll run a newb game on a different day in the store.

NPCs: I had the PCs meet Green Imsa (the woman who is green from head to toe) but they didn't bite on her mystery. A noble was going to kill his horse, but our 4th grader playing Dark the Dragon Sorceress pushed him over and traded horses with him. 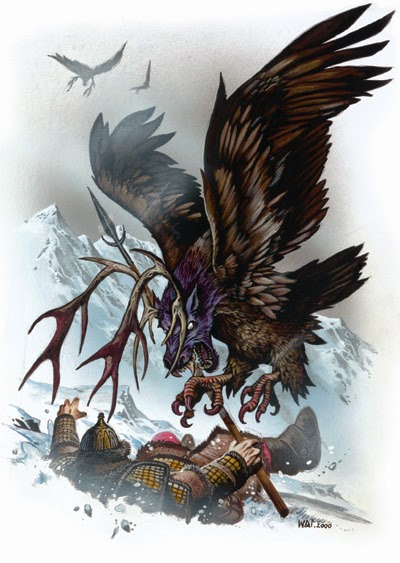 Perytons: One of the weirder D&D monsters. I wasn't going to use this encounter, but I like every session to have a combat pretty early on to get the players in gear and on the same page. These monsters have the nasty ability to dive bomb and pull out without provoking attacks of opportunity. I played up the weirdness of these creatures as best I could.

Days 6-12: Sparky the baby dragon barfed up some acid. It was the first time it ever "breathed" acid. It rained for a few days in a row to set up...

The Mushrooms: What a cool encounter. The PCs awake to find that the rain has somehow spawned the growth of little mushrooms everywhere. The mushrooms are growing fast, and when one is cut open, it releases spores that cause a sort of depression and nightmares for a few days (as well as a lifelong aversion to eating mushrooms). The PCs were able to hack through the shrooms (takes 6 hours of work!) and moved on. Very cool.

Days 14-18: The caravan swung back into Elturel (this adventure is odd in that the caravan takes such a long route to get to its' destination). They bought piles of stuff from the list in the PH. Then the nosy NPC Losvius Longnose tried to steal a PC's bagpipes. The PCs ultimately recruited him to be their eyes and ears, to scope out the cult.

Frulam Mondath: Since Frulam had gotten away in Episode 3, I thought it would be cool to have her on the caravan. I decided that she had been punished for her failures. Rezmir the half-dragon had breathed acid on her and burned her badly. She was part of the caravan, but hidden in a cart, all bandaged up and semi-comatose. Our heroes' spy caught on to this. It lead to a whole thing where the PCs snuck into the cart, questioned her, and ultimately tried to recruit her. Dark got to use her favorite spell: Friends.

The Rematch: Because of the ways the rolls worked out, Dark was working for the same wagon boss as her dad. Worse, her dad was technically in charge of her! Dark decided to prove to the wagon boss that she should be in charge by arm wrestling her dad! Her dad cast a spell on himself to get 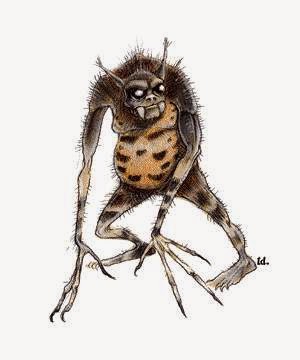 advantage on the roll. SHE STILL WON. I mean, of course she did, right? She's Dark the Dragon Sorceress! Her first act as boss of her dad was to declare that she would give him one gold every Friday "...for the rest of your life".

Day 23: Ettercaps and Giant Spiders tried to snatch some horses, but they were no match for our heroes. These ettercaps with their 44 hit points are pretty scary, but the paladin ability to give enemies disadvantage helped in a major way.

I don't know how or why all of these elements converged on the store to make it so pleasant, but I insist on appreciating it. This was just a perfect night of D&D all around. An easy 10 out of 10.
Posted by Sean at 6:40 PM