I read an interesting article here about Pathfinder's plan to counter-act the new edition of D&D. It's a three-pronged assault:

I think Paizo is awesome. I can't be the only person who wishes that they owned the D&D brand, right? Imagine D&D adventure paths every month, set in Greyhawk, Ravenloft or Planescape. I mean... wow.

But I don't like the 3.5/Pathfinder rules, and I love the D&D lore and setting.

Will Pathfinder have to make a new edition some day soon? They've done a fantastic job creating quality material for years now, but to me, once you hit "space ship technology", you're nearing the end of your system's lifespan and it's time for a reboot of some kind (see 2.5's Tale of the Comet).

I could be wrong. Maybe Paizo will just keep rolling along for many years to come. I hope so. I'd like to see both companies be successful, and to drive each other to do better. 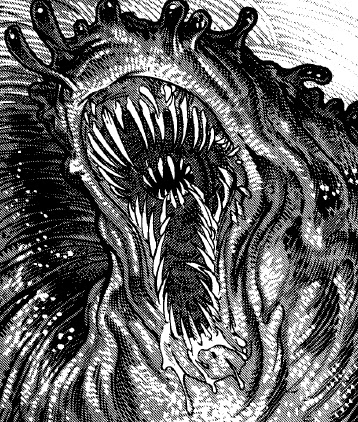 As you may recall, my next D&D campaign is going to be all Spelljammer, start to finish. I have been going over the rules and the monsters. I ranked the top 5 monsters from the Spelljammer Monstrous Compendium Appendix One here. Today, we are going to look at appendix two.

This one is odd. It is brimming over with monsters that don't fight or are friendly. D&D is a game mostly about killing monsters, here, people. At the time, at least around my neck of the woods, "hack and slash" play was looked down on. There was a real emphasis on role-playing, which is part of the reason why Planescape was so embraced.

There are a lot of cool monsters in this that didn't make the cut. Here's some of my other favorites in super-short form:

Alchemy plant - It turns into other elements, like the Absorbing Man. Cut it with a sword, it turns to metal.
Bloodsacs - Blobs that fly through space, looking for people to suck the blood out of.
Dohwar - Telepathic penguin merchants who ride space-swine. That's just... awesome.
Firelich - A flaming skull of a wizard who messed up his lich transformation and now he wants to mess you up.
Gadabout - This is a good example of the weird utility creatures found in this book. The Gadabout is a sentient plant used by elves. It can attach to you, sprout butterfly wings and create an air bubble. Basically it's a vegetable jet pack that allows elves to fly through space.
Space Owl - They know three languages, they're great ship navigators and.. well.. they're space owls. Scro - SPACE ORCS (Scro is "orcs" backwards, amirite?). They wear spiked armor, they can speak elven, they wear necklaces of their victims' teeth and they begin combat by "shouting long, literate insults against their opponents to show that they hold their enemies in contempt."


And now, without further delay, here are my picks for the top 5... well, 6... most awesome monsters from Appendix Two.

This is a magically powered automaton created by tinker gnomes. Some are "directed" and follow gnome orders. Others have gone rogue and wander wildspace doing everything except what they were designed for.

They have 3 directives:
1. Defend gnomes under attack from non-gnomes
2. Defend themselves from attack
3. Defend babies and children from harm (all babies of every species!)

They punch. Most have a retractable scoop for soil samples. And 33% of them have a wand of lightning built into their chests!

Autognomes have chances to malfunction in certain situations. This means you must roll on the Autognome Malfunction Table, where all sorts of things happen like:

I know that this is obviously skirting the line a bit close to a straight robot which is not everyone's cup of tea, but I find these guys hilarious and think they make great NPC sidekicks. I used one that talked like Soundwave from the Transformers cartoon and it went over very well.

Bionoids are elves who were altered to become "organic fighting machines" to fight in the Unhuman Wars. Those wars are long over, and they now roam without a purpose, not accepted by their own people.

They have forearm blades and fight with double-sided halberds. Once per day, they can open up the twin dorsal plates on their chests and unleashes a fireball launched out in a 30 foot cone!

They have a crystal eye on their forehead which, if removed, immediately causes the bionoid to disintegrate. The soul of the bionoid is trapped inside. Whoever holds this will basically die, as the crystal eye morphs the body into that of the bionoid and 'install' their soul.

They can... lay eggs. They're disc-shaped. If the egg is touched, it bursts and attaches to the host and grows as a symbiont. The host can change into the bionoid form in times of danger.

If an orc touches it, the egg explodes into "corrosive" filaments and tries to kill the orc.

This is all pretty much completely ripped off from the anime Guyver. I am thinking of making a bionoid as a pirate villain. Even when the PCs defeat him, if they grab the crystal they have a whole new problem on their hands.

They are 12 feet tall and they sit on asteroids pondering the questions of the universe. It is said that when one figures out all the answers, the universe will end.

The Contemplator can create three arms out of the asteroid's surface, which can reach out 50 feet to snatch a victim. The victim is then encased in a thin layer of stone, and its' intelligence is drained one point per day.

The Contemplator is more or less siphoning their intelligence, scanning the victim's mind for knowledge. Once the victim is rendered impossibly stupid, they are flung into space like detritus. Detritus, I say!

The Contemplator can gain wizard spells in this way.

This monster can make for a pretty epic fight, or can be an interesting NPC to get answers from.

I do not like the art for this monster, but the more I read the entry the more awesome it became.

These dragons are neutral, peaceful philosophers. Their scales are purple and chrome. Gems adorn their scales in patters.

Stellar dragons literally consume knowledge, and transform it into milky gems that grow on their scales. These pearls are actually gems of wisdom and pearls of knowledge. The dragons pride themselves on the number of gems that they have grown. Nobody has ever figured out how to get a pearl off a hide (trust me, adventurers will figure out a way).

Their breath weapon is crazy. They use gravity to suck you into its' mouth and into its' body - where there is a SPHERE OF ANNIHILATION. And you die! What's the range of this attack? 1200 yards! Yes, that's right, over half a mile. They can also:

- Randomly teleport an attacker 500-6000 yards in any direction.
- Cast any spell in the player's handbook without error.
- Summon one denizen of another plane once per round for up to 7 rounds. These creatures serve the radiant dragon slavishly for 2d6 rounds.

I don't know who could possibly ever fight one of these and survive. But wow they are awesome. A sphere of annihilation inside it? What a crazy idea.

Now we come to my favorite monster...

These are organic creatures created by orc shamans to destroy elven planets. There are a bunch of different types of them, ranging from 25 feet tall to 1000 feet.

The 1000 foot tall witchlight marauder floats through space, using mirror-like membranes to focus a deadly sunbeam on targets (it does 25d10 damage!). It has 7 heads and three umbilicals connected to three primary marauders, which can be launched at a planet.

The primary eats everything - plants, animals, mountains. As it does so, it ejects secondary marauders that are 20 feet tall. These things attack everything with 6 poison talons, acid spit, killing anything not eaten by the primary.

These secondaries start ejecting smaller versions of themselves that are 4 feet tall. These little guys are berserker warriors with swords for hands.

After 7 days of this rampage, the primary burrows into the ground and forms a lair. Over two weeks it splits like an amoeba, creating a second primary, which goes on a rampage of its' own.

There's a pretty good way to end your campaign, right? Space orcs sicking one of these things on your world! Crazy!

And I know this is a sixth monster, but I think that the elven defense against these things needs to be seen, too:

It is an enormous (30 feet tall or bigger) undead insect. A fighter operates it from a cavity inside it's chest.. kind of like Voltron. Like the marauders, they can eject smaller versions of themselves that look like preying mantises or moths.

The Spirit Warrior's skills are in direct correlation to the pilot's fighting skills. Some of the smaller ones can become invisible or have a stinger.

Damage to the spirit warrior is also taken by the pilot! A critical hit means the pilot must make a saving throw or die from shock.

There is an even larger version known as a Zwarth. It is piloted by crews of 5-8 people and is capable of spelljamming flight. A spellcaster inside it can project enhanced versions of their spells out of the Zwarth, doing hull points in damage instead of hit points. Hull points are what ships have.


These monster entries pretty much write a whole campaign for you. A witchlight marauder is sicked on the world. The elves have a spirit warrior stored in some dusty forgotten place. Our heroes get it and use it, defeating the marauders. Then they fly in a Zwarth into space to kill the orcs and make sure no more marauders are unleashed on a world ever again.

See you tomorrow, my good buddy.
Posted by Sean at 8:27 PM

I didn't have appendix 2, so I've not familiar with any of these monsters, but OH MAN Spelljammer was full stuffed to the gills with ridiculous shit. It was pretty obvious when they got to this point that they had run out of "stereotypical" D&D ideas and were just exploding left and right with... whatever the hell this stuff is. But it was awesome.

I did not realize Spelljammer added the Guyver to D&D! Bionoids are basically Guyver, from forearm blades to chest-blasting ray. I may have to add that to a campaign idea one day, as I even home-brewed a class like that for my monk character.

What happens when you take the smut orcs into Spelljammer? That always gave us a giggle when we were youngins.

So this book had the Guyver, and it also had Aura Battlers. The Zwarth is literally a mech from Aura Battler Dunbine.

They even have the same designer, Newton Ewell. Hats off to you Newton, you made those elves anime as hell.