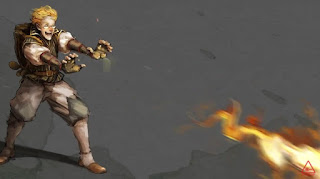 What a nice way to start out the week. Let's see if we find any hints of how the rod of seven parts plays into this campaign.

Chris Hardwick: Apparently there are a number of people who found Chris Hardwick to be annoying on this show. He only said about three sentences last episode, so I guess I'll just wait and see. I don't really know anything about him.

Last Time: The heroes beat up some of Hitch's old allies, stole a cart and headed off to find a sun dragon. 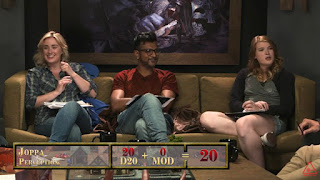 The adventurers ride north of Waterdeep. Joppa spots remnants of what seems to be a mining camp.

Chris Hardwick literally gets up and climbs into Jonah's lap. Jonah cradles him and busts out a sea shanty. And then Chris won't get off of him.

Apparently, giants were here. Giants, goblins and ogres all seem to be working together.

Up the road a bit further is a barricade. There's a symbol in the language of giants that says: "Serve."

Heyyy they are near the Mere of Dead Men! You may remember the mere from chapter 6 of Hoard of the Dragon Queen. I wonder if we will have a Voaraghamanthar sighting.

Here come some monsters. Wow. We get semi-animated graphics! That is very cool and much appreciated. I still think the people making this show are a little too worried about people getting bored, but maybe that's just me. 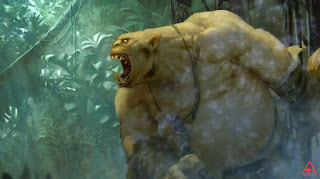 So the group has a choice - fight the monsters or head into the swamp.

Suddenly, Whil casts a fireball. Yeah, he's definitely an instigator type. We get a cool graphic for it (top of this page).

The goblins die. The ogre turns and runs.

Jonah uses a power called step of the wind and races all the way up to the ogre 120 feet away. Brawlwin shoots a crossbow bolt into the ogre's neck.

This is all a loose scene, no initiative. Darby's gizmo flail lets loose cables and wrap around the ogre and basically tie him up. Her flail is really cool.

The ogre says the dwarves were dead already. Dagny intimidates the ogre by putting her flail under his chin. The ogre admits that a "giant ice man" is giving him orders.

The ogre breaks free. Brawlwin races forward, jumps up, hits it in the stomach and the face, killing it. The group gives her a slow clap.

It goes by so quick. Good show! I see what people are saying about Hardwick, but maybe he'll tone it down as the show progresses.
Posted by Sean at 4:44 PM