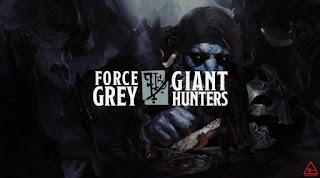 If you want to start at the start, check out my recap of the live 'prologue' show. Not a lot happened, but you kind of got a feel for what everyone is like.

OK! This is a review/recap of the first episode of Force Grey, a D&D show that apparently will somehow connect with the story of Acquisitions Incorporated. I'm going to tell you what happened, provide timestamps for what I think are the best moments, and then I'll give my overall thoughts.

The DM is Matt Mercer, of Critical Role. The group is a mix of vets and new players.

No Posehn: Right off the bat, I don't see Brian Posehn. His character vanished in the very beginning of the prologue episode and he just sat there for the rest of the session. I guess we'll see what the deal with that is sooner or later.

Half Hour: I am relieved to see that this show is only 30 minutes. I know a lot of people don't like that, but there's only so much D&D you can keep up with in a week.

The intro is a quick little thing where Matt blows a horn and the players assemble in the comic store. They head to the back room, Weird Pete style. 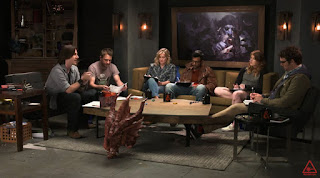 We get a narrated voice over about Waterdeep. Lots of art, some of it new. Matt recaps the prologue episode and actually looks right into the camera, which is nice. He goes out of his way to acknowledge and include the viewer.

I'm going to leave out a lot of jokes, because I don't want to ruin it for you. This show is very funny and it goes by quick.

The group needs to go to a gnome village and find a pool guarded by a maiden. They will be meeting with a sun dragon. They will have to "discover the needs" of this creature.

Whil is a sun elf and he has a pseudo dragon. I wonder if that will come into play in some way?

Whil is immediately introduced to and accepted by the group. The heroes get to pick an NPC sidekick from these three choices:
They end up choosing ...Limmalia. Or whatever her name is. The heroes go to a shop for supplies and Hitch seduces the woman behind the counter. She sells the group some potions of healing.

Hitch gives Joppa a potion and Joppa is so touched he tells Hitch he loves him. He wants to roll for a hug. Somewhere in here, we learn that Joppa has fish in his pockets.

The group heads through an alley and three people who know Hitch and start having a sort of menacing conversation. They talk about Blackstaff.

We have a real nice map here. It is a Dwarven Forge kind of deal, a miniature town. We even get some special effects, where Matt summons the map to the table and it appears in a puff of smoke.

Suddenly, Whil yells "Magic Missile!" He fires off a magic missile. We are rolling initiative!

Joppa runs up and does a flurry of blows in the bad guys. He rolls really well and does a pile of damage to an orc.

Hitch uses an immovable rod in a very clever way and intimidates the bad guys. They're leaving, but Hitch convinces Limmalay to shoot them.

Whil is confused and levitates the bad. Then when the group tells him that they're leaving, he turns it off.

The group considers stealing a cart so they can travel in comfort. Someone is asleep in it. Whil levitates the person and rolls a natural 1! He sends the sleeper flying onto a roof. The group panics, jumps on the cart and speeds off.

Really good show! I think Matt was very conscious of the pacing and he kept it moving really well. The guy sleeping in the back of the cart - that was some quick thinking on his part. I really like how Matt is thoroughly prepared for these sessions.

This show is just half an hour long, so to me this is a no-brainer. You should definitely check Force Grey out.

Jonah: It's already like Jonah can do no wrong with me. I think the guy is hilarious.

Out of all of the D&D shows that I have checked out so far, there are three people who have that kind of charisma where you end up watching their face because you can read their reactions at all times. That would be Jonah, Scott Kurtz, and Nate from Dice, Camera, Action. With Nate, I don't know what he's thinking, but he is constantly emoting and processing stuff.

Player Style: One of the things I like most about this show is that the players are demonstrating new ways to play a character and behave at the table.

Shelby, in particular, was really good on this episode. She immediately joins in on any sort of scene and in general she seems like a real team player. I always admire someone who will set up jokes for other people, and she does it absolutely seamlessly on this episode. I think that being unselfish is the hallmark of a great D&D player.

Background Music: I don't think the background music is necessary. It didn't quite detract from the show, but it didn't quite match the tone of the session. The group is entertaining enough that I don't think we need musical cues to keep our attention.
Posted by Sean at 5:29 PM