Dungeons & Dragons - A Guide to Gruumsh, God of Orcs 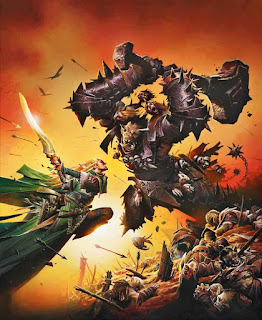 This guide is an attempt to collect all of the lore about Gruumsh from the many different products he's appeared in. My hope is that this will give you a nice pool of stuff to work with if you decide to use Gruumsh in your game.

Gruumsh is a guy that doesn't see a lot of use, as far as I can tell. He's actually a really cool bad guy. His wife, Luthic, adds a lot. 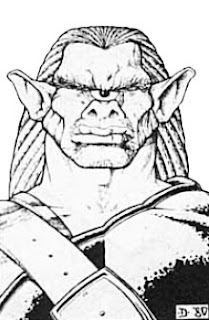 Only shamans refer to him by name. Most orcs call him He-Watches or He-Who-Never-Sleeps
Dragon Magazine #62 - The Gods of the Orcs

There are actually two articles about orcs. The first is about half-orcs, but it goes off on a big Gruumsh tangent. We learn that:
This issue details the orc gods. It's got awesome art by Jim Holloway. Gruumsh now has an eye patch and is no longer a cyclops. Personally, I much prefer this version. 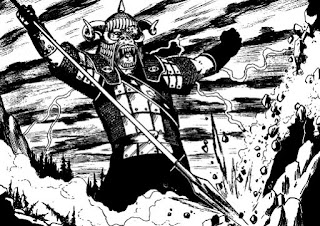 We start with a myth about how the other gods split up the world between them and then laughed that there was nowhere left for the orcs. Gruumsh used his spear and stabbed/corrupted many parts of the world for his orcs to inhabit. "Orcs shall inherit the world you sought to cheat me of!"

Corellon vs. Gruumsh: Corellon tried to shoot out Gruumsh's eye but missed, according to the orcs.
Warfare between tribes is encouraged to weed out the weak.

Baghtru: This orc fellow is the son of Gruumsh and Luthic, the Cave Mother.
Ilneval: Chief lieutenant of the orc armies "in Hell." 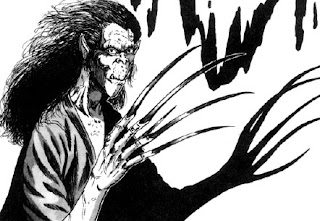 Both of those Dragon Magazine articles are reprinted in this book. 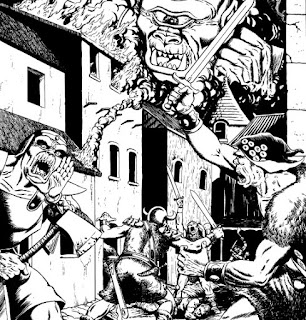 I love this book. We learn that in pre-history, one or two now-unknown orc gods conspired to depose Gruumsh and were destroyed utterly. Gruumsh always seeks new territory for his race. There is no word for 'peace' in the orc language. 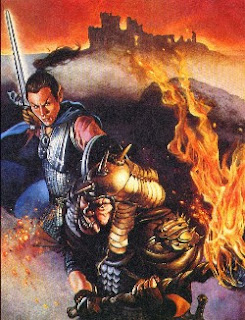 This Planescape supplement really shakes things up in a good way for the orc gods. The orcs were defeated badly in the war in Hell. For the most part, they've retreated to Acheron.

They had to flee Hell because the orc lieutenants squabbled and the orc army was taken by surprise. Now they'll do or die from Nishrek, a realm on a cube in Acheron.

Fun Fact: "Female" is actually a swear in Orcish.

Gruumsh: When a tribe of orcs becomes complacent, he either destroys them with fire or sends another orc clan after them. He is 'searching the cosmos' for his eye.

Ilneval: Now he not only wants Gruumsh's place in the pantheon, he also wants Luthic as his wife!
He's too scared of Gruumsh and Baghtru to do anything about it, though.

Luthic: She's one of the only people who can control Gruumsh and Baghtru. She's secretly communicating with Hecate for help against the goblins in Acheron, but so far, nothing.

I had to look up Hecate in this book. She's a Greek god. In D&D, she lives in hell. Check this out: Hecate has the Eye of Gruumsh, "the one put out by the elf high-up Corellon Larethian." She has left clues for Gruumsh, but he's to dumb to pick up on it. 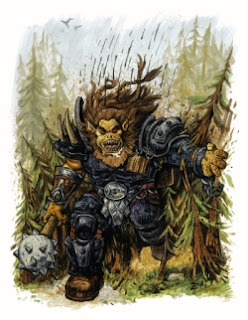 In the book on the plane of Acheron, there is a page describing Gruumsh's home of Nishrek Here's what we learn:
Luthic: Her tiny tribe in Acheron is called Black Claw. They are devoted to healing and fertility. One member of Black Claw is Tamurda. She is hated/respected for her powerful healing broths and salves. Her skin is bleached dusky white from years underground. 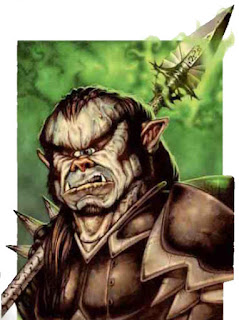 Grumsh is mentioned as an enemy of Corellon a few times. He is a god of chaos, evil, strength and war. We're back to Gruumsh having one unwinking central eye.
Faiths and Pantheons 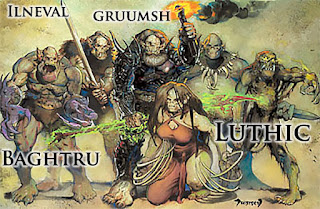 This is a Forgotten Realms book. Apparently the Realms version of Gruumsh is a little different? His spear is covered in the blood of elves.

Awesome art! They are half-demons/half-orcs. They have the ability to control flames. Many of them are sorcerers.

Luthic: She is known as "The Blood Moon Witch." There is a secret group called the "Luthicar monks" comprised of females who aren't allowed to use weapons.

I had no idea Chris Perkins wrote an adventure about orcs! This is a module for 4th level characters. There are a ton of cool details in this. Here's some of the stuff related to Gruumsh:
Complete Divine

Gruumsh has an entry in here. Prayers to Gruumsh begin with "Kharg-hark" - orc for "revenge."
Relics:
D&D 4th Edition

Not much in here. Gruumsh is not an enemy of demons. Chaotic evil god of destruction, lord of marauding barbarian hordes.

In 4th edition, Gruumsh lives in a realm called Chernoggar, the Iron Fortress. It's in the Astral Sea. Bane lives here, and the two gods send their armies after each other.
I think that I would say that Gruumsh won and chased off Bane. Maybe he left some allies there and returned to Acheron to conquer the other cubes. Maybe he stuck Ilneval here and charged him with exploring and conquering the astral?

Nishrek: Mountains riddled with caves. Crudely built stone orc hold. There are a lot of earthquakes, avalanches and fiery geysers. 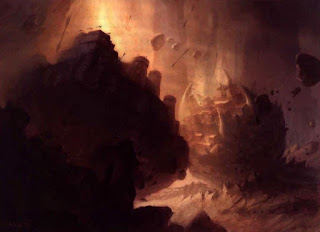 This book greatly expands on Chernoggar. There's a ton of material here, but very little of it gives any new info on Gruumsh. Some gods don't want the battle between Bane and Gruumsh to end because it keeps both villains occupied.

Tower of Skulls: Gruumsh lives in this massive structure of skulls lashed together by chains and the innards of the slain. There are skulls of primordials and deities that Gruumsh slew.

There's a section on the battlesworn of Gruumsh. It says, "Gruumsh culls his battlesworn from the greatest villains of the cosmos." They are immortal warriors plucked from the Shadowfell to serve Gruumsh in the afterlife. You could do a lot of cool stuff with these guys.

Baghtru: Yep! He's in here. He's an "exarch" of Gruumsh. He is sometimes known as "The Fist of Gruumsh." He's got fun powers called "Hammer Fist" and "Backfist Bowl Away" where he sends you flying 50 feet, dazes you and knocks you prone. Ogres pay tribute to his power.

Luthic: She's also got some fun powers. She can make it rain blood. She can go into a blood moon frenzy, giving herself and her allies free attacks.
Hammerfast

Long story short, orcs and dwarves share a town thanks to a pact between Moradin and Gruumsh to end the bloodshed. Hammerfast is full of ghosts of those who died in the battles. The ghosts are treated like citizens.

The Festival of the Eye: Each year in winter, orcs set up a tent for a week. Champions of Gruumsh come from far and wide to do battle in ritualized combat. Some end in death. Anyone can jump in. Some fights are one on one, others are chaotic brawls.

The Black Spire: A temple of Gruumsh. It's hollow inside, with rings of balconies along the inner walls. Priests of Gruumsh engage in ritual combat.

There is a cool factoid here. Kurtulmak (god of kobolds) showed Gruumsh a way to the Misty Island, a place sacred to Corellon's faith. It was there that the first elves were born from Corellon's tears and blood. Gruumsh and Kurtulmak stole the island and hid it.

This is a heck of an article! We learn all sorts of new things.

Gruumsh and Corellon were originally twin sons of a progenitor deity that sacrificed its own life so that the offspring would live. One was given intelligence, life and beauty. The other savagery, darkness and chaos.

They fought as allies in the Dawn War. During the Dawn War, Gruumsh never slept. He tirelessly battled the Primordials, yet Gruumsh grew jealous of Corellon. People loved Corellon and they hated Gruumsh.

The Vale of Blood: The fight began in a vale in the mortal world where the barrier between the world and the feywild was thin.

Lolth aided Gruumsh by enchanting his spear before the battle. She made it invisible and poisonous.

Corellon's allies, the Seldarine, showed up to help. Gruumsh had evil deities lurking nearby. Both sides clashed. This became known as The Godswar.

Gruumsh was about to kill Corellon. One of two things happened:
Orcs say that Gruumsh only had one eye to begin with.

That eye, it turns out, had been giving Gruumsh powers. He was prescient and had prophetic sight. Supposedly the eye was destroyed. Sehanine blinded him with the moon's light.

Gruumsh's armor is made from the hides of forty slain dragons.

In addition to being mentioned a few times in the PH, Gruumsh gets a huge section in the orc entry of the Monster Manual.

Most of it is the same as in earlier editions. Luthic gets a big paragraph, explaining that she wants orcs to be breeding a lot.

The Orc Eye of Gruumsh entry explains that sometimes an avatar appears before an orc, and if the orc plucks out one of their own eyes, they have the right to call themselves an Eye of Gruumsh. They are shamans.

That's where we're at so far! Lots of fun stuff, especially the battle between Corellon and Gruumsh.
Posted by Sean at 5:15 AM

Thanks for compiling all of this! It's definitely going to help in my campaign.

"It is believed that Corellon and Gruumsh are actually brothers"

Tell me you screwed you writing or something. FFS please tell me you didn't actually mean to write that.