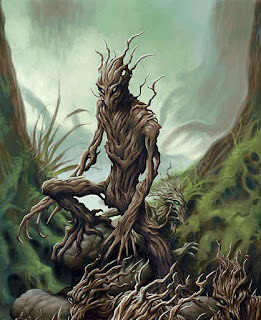 I'm not sure how I found it, but Holly did a stream on Twitch last week. She made the Strahd doll that her character discovered in Paultin's Mystery Wagon! She made this thing in half an hour and it is fantastic. Check it out: 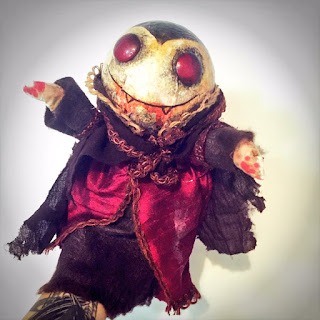 Pretty awesome, right? As far as I am concerned, that is officially what the doll looks like. She even put a tag on the back that says: "Is no fun? Is no Blinsky!"

No Nate this week. He's "off fighting crime."

They are going to do a live episode of this show at TwitchCon in September. That should be awesome.

Last Time: Evelyn turned into a werewolf and was tied to a tree so she couldn't hurt the group. Strahd apparently reached out to Paultin - he wants the bard to join him. The group started exploring a winery that has been overrun by druids and their evil wood-creatures. 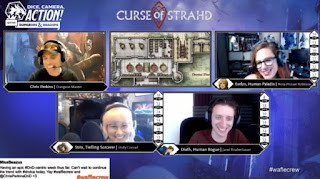 We stopped last time when Strix got her magic staff. It is spongy and moist..?

The group holes up in a room for a while so that Strix can learn what the staff does. Diath watches the window to keep an eye on the blights. They're sort of very slowly coming toward the building. They behave a lot like zombies.

Strix learns that the staff lets her drain people's hit points to heal herself if she hits them with it. If she attunes to the staff, the blights won't consider her a threat.

Diath finds a secret door and creeps through. There's a bedroom (room W17, page 178). He finds a secret compartment in a bedknob. It has a key to the chest in the room.

In the chest, there's a pile of gold, electrum and silver. Strahd's face is stamped on the electrum pieces. It's pre-vampire Strahd. In the desk, Diath finds records of wine shipments.

Strix finishes attuning. Strix's eyes go dark. She is transported away from the winery! She is near a tree - an axe is embedded in it. She's at Y4. page 198. She hears the Friday the 13th noise. There's a wicker statue of Strahd here, too. She wants to set it on fire.

The tree comes to life. There are blights around. Strix can command the blights. This is a vision. Strix collapsed.

Diath and Evelyn aren't sure what to do. Diath knows her consciousness is gone - he has experience with people leaving their bodies.

Evelyn tries to hug Strix into consciousness. It works! From Strix's perspective, roots dragged her into the ground.

She snaps out of it and actually spits dirt out of her mouth. Diath kicks the staff away.

Suddenly, the group notices blights coming down the hall toward them.

Diath wants to run. Evelyn and Strix are shocked and wonder if someone cast a fear spell on him. They retreat through the secret door.

Strix goes into the adjoining room. She thinks the blights won't attack her because she has the staff.

Siath suddenly realizes that if the group destroys the staff, it might destroy the blights. Strix really doesn't want to destroy it because it matches her outfit.

Finally Strix gives in and Evelyn gleefully chops it up in the name of The Morning Lord. The staff lets out an inhuman shriek and all of the blights in the area collapse and shatter.

Blood spurts out of the staff and covers Evelyn. 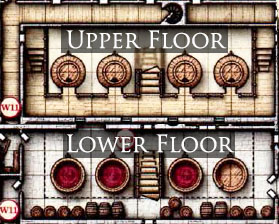 Someone in the building yells out, "No!" The group heads toward the sound. They come to a big room with four large fermentation vats (room W9, page 176). There's a druid here. It looks like she's dumping something (poison?) into a vat. She is on a walkway above the vats. The group is on the floor below her.

Evelyn gleefully challenges the druid in the name of Lathandar. Evelyn uses her boots to fly up and attack her. The group is rolling really bad. Jared had advantage and he rolled a 2 and... a 1.

The druid swings her staff at Evelyn and she rolls a 1. She slips and falls into the massive vat of wine! The group decides to let her drown after much debate.

Evelyn reaches in to grab the druid's staff, which is carved to look like Strahd. The druid lunges out of the wine and casts thunderwave. The heroes go flying and the cask shatters. The wine pours out and the druid is free! Awesome.

Diath jumps down, stabs her and actually makes her heart explode. The group applauds.

The heroes go outside. All the blights are dead. They meet the Martikovs, who thank the heroes and tell them there's more work to do. To get the winery working, they need three magic gems. One gem is at Yester Hill.

The wife of Davian breastfeeds her baby as she tells the group about the gems. Diath nervously looks skyward.

Diath hands over the electrum pieces he looted! Wow, nice.

Davian warns them about an "old witch" and to avoid her at all costs. My favorite NPC in Curse of Strahd!

He also mentions the Amber Temple. Diath remembers that the amber doors of the temple were part of his tarokka reading.

The heroes take a short rest, then they get on Mourning Glory and Valentina. The whole group rides to Yester Hill. A bolt of lightning hits the hilltop.

They spot the wicker statue of Strahd at the top of the hill. They want to burn it. They approach. There is nobody up there.

At the top of the hill, they see a city in the fog. It's made of the fog. They feel like it is baiting them. It has a castle with two spires with a bridge connecting them. This is area Y5 on page 200 in the book.

The group goes around the circle and heads for the tree. They want to find this glowing green gem.

There's an axe stuck in the tree and a skeleton lying at the base of it.

Evelyn wants the axe. She grabs it. That's where we stop.

Another good episode! The show has been extremely fun to watch for at least 5 weeks, now.

Modifications: Maybe I just missed it, but as far as I can tell, Strix's vision of the Gulthias Tree is not in the adventure at all. I wonder if Chris wanted to foreshadow Yester Hill and maybe clue the group in on the place. Maybe he wanted to motivate them to choose to go there when given the opportunity?

The blood spurting out of the Gulthias staff also isn't in the book, at least from what I can tell. It was cool. I'd definitely use both ideas if I ran this.

The Fog City: I think if I was running this, I would have completely forgotten about seeing the 'fog city' from the top of the hill. Now that I've seen this episode, I would have no trouble remembering it. Again, anyone thinking of running Curse of Strahd needs to watch this show. It helps immeasurably.
Posted by Sean at 12:45 AM

Andrew Morris: My theory is that wizards thinks that all DMs want to use the books as a toolkit more than anything. Some of us really do want an adventure that can just be run right straight out of the book. I guess we're in the minority?

I think Chris might be adding little touches to keep those of us who have read the adventure on our toes. Or maybe these are ideas he had after the book was published?