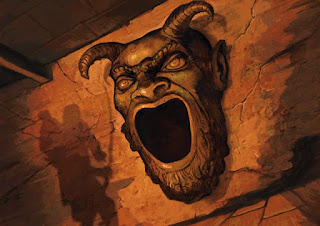 In this article, I am attempting to create a nice brief overview of traps in 5th edition D&D. The trap information is spread out and (for me) hard to find in the core books, so I thought I'd assemble it all on one page to use as a reference. I'm going to go over disabling traps, spells that relate to traps, and different types of traps. 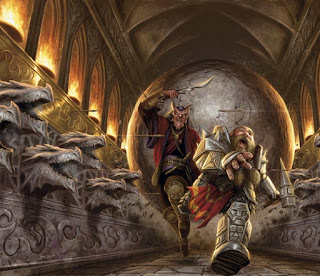 Detecting Traps: Wis (Perception) check against the DC of the trap. It take about one minute to check for traps on a door (PH page 181). Searching a room takes ten minutes.

The book advises that in some situations, don't even roll. For example, if there is a pressure plate under a carpet, the hero automatically finds it if they remove the carpet.

Disabling Traps: This is dexterity-based (PH page 177). Some traps are mechanical, and some are magical. Each is handled a little differently:
Things That Help Characters Deal with Traps

Obviously, the most important thing is Thieves' Tools (PH page 154). These cost 25 gold. This little kit has stuff like a file, lock picks, pliers, that kind of thing.

If you are proficient with these tools, you can add your proficiency bonus to disarming traps and picking locks. Here are some things that help characters with traps:
Trap-Related Spells 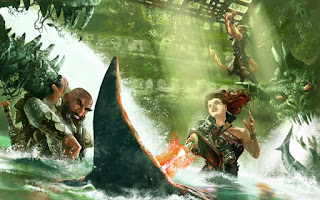 (lvl 2) Find Traps: (PH page 241) You sense traps within 120 feet. It only reveals that a trap is present. You don't learn where it is or exactly what it does.

(lvl 2)  Alarm: (PH page 211) You create a warded area in a 20 foot cube. If any creature tiny or larger enters it, the 'alarm' goes off. It can be an audible noise that lasts 10 seconds or you can set it so it alerts you mentally as long as you are within a mile.

(lvl 2) Magic Mouth: (PH page 257) This lasts potentially forever. You set the trigger. When triggered, the mouth appears and utters a message up to 25 words. This is a very fun old school spell that I find very amusing.

(lvl 3) Glyph of Warding: (PH page 245) These are nearly invisible. Intelligence (Investigation) against the caster's DC to spot one. The caster decides what triggers it: touching it, getting close to it, etc. There are a couple different types:
(lvl 6) Guards and Wards: (PH page 248) This lasts 24 hours and covers 2,500 square feet. You can create a "password" to bypass it. It creates effects:
(lvl 6) Programmed Illusion: (PH page 269) This spell is tailor-made for trap shenanigans. You cast it and set the conditions for what triggers the illusion. The illusion can't be bigger than a 30 foot cube and if there's activity in it, it can't last more than 5 minutes. Trying to disbelieve is an Intelligence (Investigation) check against the caster's DC.

(lvl 7) Symbol: (PH page 280) This creates a glyph that is nearly invisible, just like a glyph of warding. The range on this is crazy. The symbol affects everyone within 60 feet! There are a lot of effects. I'll list a few so you can get the general idea:
How Traps Work 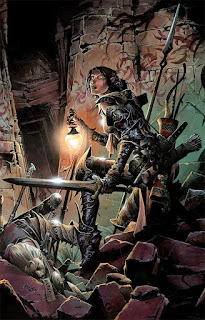 Traps are discussed on DMG page 120. Most traps have a specific trigger, such as stepping on a pressure plate or setting off a trip wire.

Setting Trap DCs and Damage: (DMG page 121) This is the most important thing when making a trap. The charts on this page give you the numbers you'll need. For example, a trap that is deadly for a 7th level character has a DC of 14, a +7 to hit and does 10d10 damage.

Complex Traps: (DMG page 121) These traps execute a series of actions each round. It rolls initiative and can "take an action." The example given involves a flooding room. On the trap's turn, the water level rises.

Sample Traps: (DMG page 122-123) We are given a bunch of classic D&D traps like:
Quicksand: (DMG page 110) I know this is in the 'environmental' section, but it's a pretty common trap. When you enter it, you sink d4+1 feet and are restrained. You sink d4 feet each round hence. Escaping requires a strength check. The DC is 10 + the number of feet you've sunk. Once you're under, you'll be making suffocation checks (see PH page 183). You can hold your breath for 1 + your Con mod in minutes.

When you are running a trap, there are some things to keep in mind.

Marching Order: At the start of the session, have the group describe how they travel - who is in front, who is in back, etc. Tell them that unless you hear differently, that is the order. This way, when a trap hits, there is no question as to who is where.

Sidestep Metagaming: Let's say you have a room with a pit trap under a carpet. If you plop a map on the table and ask the players where they are, obviously they know something is up.

Also, if you suddenly go into detail about how there is a carpet in the room, the group might realize that you're describing this carpet for a reason.

Here's what works for me. I use red herrings. Sometimes, I will mention a specific detail or ask the heroes precisely where they are for no reason. This is done to keep them on their toes and to put a metagame mask on the rooms where it does matter. 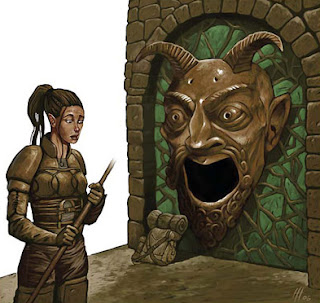 I was going to list some cool traps in 5e adventures, but I hate the idea of spoiling them for potential players. I'm also not going to talk about the Tomb of Horrors, because I don't want to spoil that, either.

I'm going to list some of my favorite traps from previous editions.

(Pages 9-10) The Frictionless Room: This room has pits that are 10 feet deep and are full of rusty razorblades that can give you "instant super-tetanus" that will kill you in d4+1 rounds. The walls, floor,and ceiling are totally frictionless.

"Anything that alights on this silvery surface will move in the direction of its last horizontal impetus, bouncing off the walls (if it strikes them) like a billiard ball, until it slides into a razor-pit."

Fly spells and teleportation don't work in here. I ran this a few years ago and it was great. 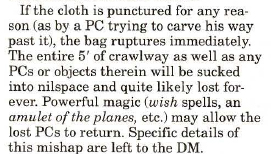 (Page 15) First Crawlway: All of the traps in this dungeon involve magic items. In this area, you need to crawl through a tunnel 3 feet wide and high. At the end of this tunnel, a "...thick cloth sheet seems to be stretched across the passage before you, barring further progress."

It's a giant bag of holding. It is stretched very snugly around the mouth of the crawlway.

If you puncture it in any way, 5 feet of crawlway and anything in it is sucked into nilspace and "quite likely lost forever."

As if that's not bad enough, anyone with a portable hole who gets close to the bag is gated to another plane with the hole and the bag. 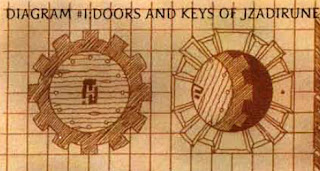 (Page 59) The Gear Doors of Jzadirune: This adventure is the first in the Shackled City adventure path. It's written by Chris Perkins. The adventure involves a dungeon called Jzadirune, created by gnomes who were wiped out via a magical plague called The Vanishing.

This place is full of gear-shaped doors with different magic glyphs on them. Each glyph sets off a different effect including corrosive gas, flame jets, rays of frost, you name it.

The group needs to find keys in the shape of a rod. There's a different key for each glyph. You need to find something like 10 keys to safely traverse the complex. This entire dungeon is built around the trapped doors and I think it is really awesome.

I ran this back in 2008 converted to 4e and I didn't do a very good job. I really want another crack at it using 5e rules. 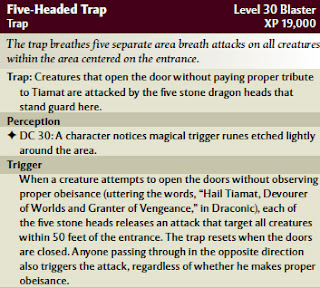 (Page 158) Five-Headed Trap: I think this is the coolest trap I've ever used. Carved in the face of a cliff is a 150 foot tall carving of Tiamat. A huge pair of closed doors are set into the dragon's chest.

If you open the doors without uttering the pass phrase, all five heads breathe on the party at once! That's lightning, acid, poison, cold and fire. Each breath weapon has an aftereffect. Worst case, you are immobilized, burning and taking ongoing acid and poison damage until you make your saving throws.

I ran this trap in my Scales of War campaign. The heroes were level 29 at the time. They were on fire, running around and screaming like maniacs. It was awesome.

Anonymous: I do indeed! I'm going to add it to my links. The D&D site has so many weird nooks and crannies. It's too bad that they don't sort the whole thing out.

Canon enhances the printer scan functionality, and includes a robust security feature set. For more information, you can visit our website at ij.start.canon and get more information at your convenience.

Provide the best MS Office product key for your office. To install the Office Setup Product Key, click on the link office.com/setup given by us.

Amazon.com mytv is probably the best platform to watch movies and TV shows on the web continuously. Now you will be able to watch your favorite shows on your PC or PC as well as on your Smart TV and Gushing Stick. For more details click on our website amazon.com/mytv

Norton's anti-malware engine uses machine learning, advanced heuristics, and an ever-updating malware directory to identify malware. For more information visit our norton.com/setup Click on the website and get the details.

The Network Device Setup Utility is a software application that enables your computer to communicate with a printer. You can use this utility on your computer to perform basic settings such as entering a printer IP address or selecting a network frame type. For more information, you can visit our website at ij.start.canon and click on your You can get more information at your convenience.