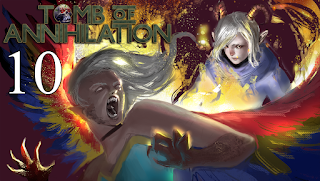 The heroes continue traveling through the jungle of Chult, searching for the Lost City of
Omu. Their guide, Azaka Stormfang, died when the group fell off the bridge last session. I bought art of her and she died after 2 episodes. Not cool!

You can watch this right here:


I had bought Jungle Treks and I immediately wanted to run the tropical harpies scenario. So, I did!

We had left off last time with Ramrod getting possessed by the ghost of a goblin named Bokadoka. Seeing as how I was robbed of the opportunity of doing my bad Sean Connery voice, I decided to use my "snooty lady" voice. I also got to show off my "woman singing" voice, which always kind of makes people take a step back.

Tangent: When I was going to community college, I'd be home alone with my dog in the mornings. One day, I took advantage of the empty house and began loudly singing in an opera man voice.

I was doing a dramatic, deep version of: "Lay down and boogie, play that funky music... til you DIEEEEEE" and I was holding the last note, cracking myself up. I'm marching around my room singing this stupid song as loud as I can, and suddenly I hear howling.

Stunned, I staggered out of my room, and there's my dog - who had never howled before - singing along with me. The problem was that I was laughing so hard that I couldn't sing with her. She was looking at me like, "what the hell are you doing?"

OK, now that I've told that essential story, we can continue.

There's these skeletons that guard the bottom of the harpy tower. They attacked, and I got a little alarmed. The fight was you-roll, I-roll. No drama, just numbers. I couldn't think of any cool maneuvers to do, so I ended it a quick as I could. 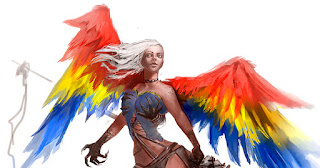 The heroes got into the 3-stories tall harpy tower. The harpies were on the roof. The setup here is that the floors are weak. Crossing the 2nd and 3rd floors require an acrobatics check. Fail, and you fall through!

At this point, I figured the harpies had heard them.

What followed was an insane battle. where Mistletoe and Zavagor blew up this evil idol on the ground floor (it's the thing on the cover of Jungle Treks).

Val actually climbed in the back of a harpy and rode it around, dodging obstacles and ultimately flying it into a wall.

Ramrod grabbed a harpy on the 3rd floor jumped on it. They both smashed through two wooden floors and crashed on the stone ground below. he tried to flip him so that she landed on him, but he rolled a natural 20 on the opposed strength check.

He killed her. One harpy fled. Mistletoe stopped it with an entangle spell. While the group tried to figure out what to do with her, Ramrod chopped her up with an axe.

It was a really fun session, one of my favorites of the campaign so far.

why are they harpies so pail in an African analog continent ?

Tomb of Annihilation pdf was a great read! Sometimes reading through adventure modules can dissuade you from running them since the process of preparation (reading the modules) can sometimes get boring. Tomb of Annihilation fixes that by giving everything life and a story of its own. Interesting locations and NPCs all work together with a solid foundation to make a fantastic adventure!