Dungeons & Dragons - A Guide to the Lich


Today we're going to take a look at one of the most iconic D&D monsters: the lich. We'll check out the lich from each edition, discuss the transformation process and phylacteries, and then we'll go through the many lich variants from D&D books from the past.


A human becomes a lich through sheer "force of will," and maintains this state through the use of magic and a phylactery.
AD&D 2nd Edition Monstrous Compendium

The 2e lich is quite an expansion of the 1e version. We learn quite a bit:
D&D 3rd Edition Monster Manual 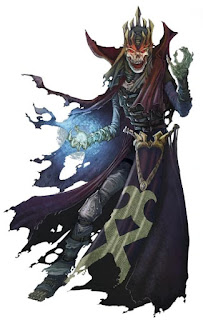 In 4e, a "lich" is a monster template to apply to NPCs. In this edition, bad guys didn't cast spells from the Player's Handbook, they just had a few "powers" in their stat block that they used. It is different and weird, but as a DM, I can tell you it was much, much easier to run.

The book has two example statblocks: a Lich (human wizard) and a Lich (Eladrin Wizard). Powers and info:
There's also a monster called a"lich vestige", which is the "...arcane remnant of a destroyed lich. It dies not have a phylactery, and crumbles to dust when damage." It was a "minion", a monster type in 4e that has only 1 hit point. 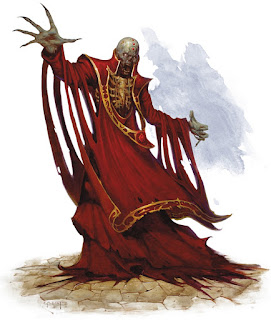 How do you become a lich?
Soul Maintenance: Liches must periodically feed souls to their phylactery through the use of an imprisonment spell.
Liches are spellcasters with legendary actions. They can actually cast up to 9th level spells, with power word kill being their 9th level spell.

Their touch can paralyze you. They have a gaze that frightens, and they can "disrupt life," causing non-undead within 20 feet to take necrotic damage.

I wasn't really aware of the whole "feed souls to the phylactery" thing! Now let's look at a really old article about becoming a lich.

Dragon Magazine #26 "Blueprint for a Lich"

This is from the early days of D&D, and describes the process in which a creature becomes a lich. It goes like this:
You no longer need to memorize/pray for your spells, you just get them back after a long rest.

There's a potion of transformation that must be quaffed in order to become a lich. Here are the ingredients!
The items are mixed in the order given by the light of a full moon. When you drink the potion (all of it) roll a d100:
A few D&D products discuss phylacteries in one way or another. Here are the ones I could find.

The Phylactery of Darkness: This item is a 1-inch cube of blackest adamantite inscribed with prayers to Nerull.
Van Richten's Guide to the Lich


Destroying a Phylactery: In Van Richten's Guide to the Lich, the topic of actually destroying a phylactery is discussed.
It also suggests that magic weapons of +3 or higher can directly damage a phylactery, but the phylactery can't actually be destroyed this way.

This book gives some general information about phylacteries.
Tales From the Yawning Portal: Dead in Thay


This adventure involves a lich called Szass Tam, who has built a "Doomvault" that houses the phylacteries of his many high-ranking lich servants.

Szass plans to feed the souls of many Chosen (divine agents of the gods) into his phylactery, which could give him the power to become a god.

The Doomvault is in a demiplane. The phylacteries are kept in sepulchers: "The sepulcher walls hum with arcane power. On stone shelves are leather cases, amulets, daggers, scroll tubes, unholy symbols, and other ornate objects. These are the phylacteries of Szass Tam's lich servants."

The magic of the sepulcher protects the phylacteries from harm.

The idea here is to "disrupt the flow of energy," which will stop Szass from draining the essence of the Chosen.


In the very final room of the dungeon in Tomb of Annihilation, there is a room full of phylacteries. "Two facing balconies halfway along the room are littered by ornate glass bottles, fluted silver urns, ivory caskets, and other vessels - all of them inscribed with baleful sigils."

Acererak (the lich villain of this adventure) has disciples scattered all throughout the multiverse, including many liches that seek to become as powerful as him. He keeps their phylacteries here.

"Destroying a phylactery is no simple task and often requires a special ritual, item, or weapon."

The phylacteries here are unique, and discovering the key to each one's destruction will require time and expensive research.

There is a 10% chance that any one of these phylacteries would be destroyed by hurling it into the lava.

Now let's take a look at the many different types of liches that have appeared in D&D history.

Illithids are supposed to stick with psionics, but some secretly study magic.

Normally when a mind flayer dies, it joins with the Elder Brain. But spellcasters aren't accepted, so they pursue lichdom as a way of gaining eternal life.

9 mind flayers worked together to figure out how to achieve lichdom. They were known as the Alhoon. All subsequent mind flayer liches are also known as Alhoon.

Becoming an Alhoon:
Alhoons can cast up to 6th level spells (including disintegrate). They still have their mind blast power, which stuns all in a 60 foot cone.

Archlich (Lost Ships)
Sometimes, a good-aligned wizard becomes a lich. They generally don't use phylacteries like an evil lich - they place their life force in a magic item.

If you speak the name of an archlich and you're on the same plane as it is, it can hear it.
Water walk at will.


Sometimes, lawful good elves seek undeath. They become liches known as a baelnorn so that they can continue working on a task such as guarding a people or location.
Projections: 3 times per day they can project a wraith-like version of themselves up to a mile away. The baelnorn can see, speak, and cast spells through them. The projections are intangible but can be reduced to 0 hit points.

If the lich leaves the host body, it combusts. The lich must possess a new body within an hour, or it is destroyed.

These creatures start in the Dark Sun setting but I guess they get sucked into the demiplane of Ravenloft.

Their touch draws magical essence from others.

When they cast spells, they drain life from the environment around them. Plants turn to ash and cause pain to the living (giving them penalties to initiative rolls).

If a lich fails to feed souls to its phylactery, its body crumbles and only the skull remains. This "demi-lich" retains only a fragment of its former life force. It mostly lies dormant, but if you poke it with a stick, it animates and you're going to die.
Dracolich (D&D 5th Edition Monster Manual)
Dragons transform themselves into dracoliches via necromantic energy and ancient rituals.
They are driven to rule over all. Becoming a dracolich:
Dragon Magazine #344 - The Ecology of the Dracolich

This entry also includes drider liches. Drow liches tend to use powerful magic items, such as a staff of power or a wand of fireballs. They frequently "..maintain nests of hairy spiders.." 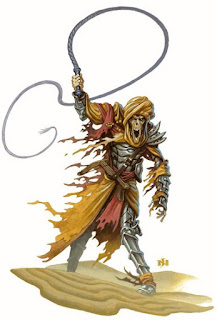 People known as "walkers of the waste" travel the desert, using magic to spread the desert and drain the moisture from things. The can shape sand, and belong to an organization known as the Dusty Conclave, whose goal is to turn the entire world into desert. When a walker becomes powerful enough, it transforms into an undead dry lich.
Elemental Lich (Ravenloft Monstrous Compendium III)

"Elemental liches are diabolical wizards who studied and mastered the use of Ravenloft's strange elements before or during their undeath."

"Where most liches control hordes of undead minions, elementalists control the very spirits of the elements themselves."
Firelich (Spelljammer Monstrous Compendium Appendix I)

A lichfiend is a fiend (usually a demon or devil) who achieves lichdom. Could be a balor, glabrezu, marilith, nalfeshnee, succubus, bone devil, horned devil, ice devil, or a pit fiend.

Created by a necromancer who was trying to figure out how to become a lich, this is a pool of animated blood that seeks out magic items and wizards.
Lich Claw (Open Grave)

Sometimes a lich has a familiar! The familiar's essence might also be in the lich's phylactery. Here's how it works:
Lich Vestige (D&D 4th Edition Monster Manual)

Husks of lesser liches drained of their essence to power the research of Irfelujhar, an ancient lich who once served Vecna but now serves Tiamat.
Master Lich (Legend of the Spelljammer)

A master lich is basically just a lightly more powerful lich. Their flesh is not rotted. The skin is pulled back like leather over the skull and bones.
Psionic Lich (Van Richten's Guide to Liches)

Users of psionic powers sometimes twist the powers of their minds to extend their existence beyond the bounds of mortal life. They often regret becoming liches.
Suel Lich (Dragon Magazine #339)
The Suel empire existed in the Greyhawk setting long ago.  Suel lich is a cross between a lich and a malevolent ghost.
Thicket Dryad Lich (Open Grave)

"Sometimes a dryad's desire to protect its woodland twists into dark obsession. In rare instances, one of these fey creatures crosses the threshold into undeath and becomes a thicket dryad lich. The dryad transforms a favorite tree into a phylactery. The corruption in the dryad's soul then causes the tree to become warped and rotted. Over time, this blight can spread out over the surrounding forest."
Vassalich (Van Richten's Guide to the Lich)

A vassalich comes about when a living wizard makes a pact with a lich in order to become a lich themself.
Void Lich (Open Grave)

"A void lich is an antediluvian horror from the Far Realm that seizes control of the body and phylactery of someone performing a lich transformation ritual. Lured into the world by the eldritch power unleashed during the ritual, this aberrant entity shunts the ritual performer's soul off to the Far Realm and possesses the host body as its own. A void lich is cloaked in darkness, a remnant of the dark, churning corridors of its origin plane."
Famous Liches

Some of D&D's most infamous villains are liches. Here are a few of the more prominent ones: