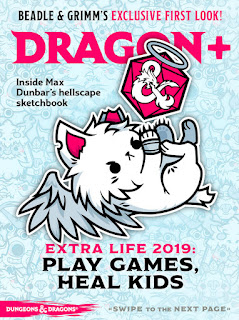 This is a gigantic issue! I'll talk mostly about the D&D-centric stuff. As usual, there are some extremely handy maps in the back that you should grab ASAP, as wizards D&D free online stuff tends to vanish online over the course of a few years.

This issue has a "guest editor" named Chris Boyce. We learn about his campaign at the end of this issue, and it's really awesome.

Chris started playing D&D with the original red box, and his group played all the way up to the immortals set!

Then as he got a bit older, he switched to AD&D and his group got very into earning every XP. He says they played for four years and only got to 5th level by the end.

I have known a few groups who are very into earning every single XP. I had a friend who was in this group that played a lot, and yet after years of play, they were only 2nd or 3rd level. They literally roleplayed everything out - going to town and shopping was an immersive experience.

Emi is the Art Director for Wizards of the Coast. We learn about her job and where she works.

She talks a bit about how she'd like to make a version of D&D for kids. That sounds like a fun idea. Can you strip the game down, sort of like how they did way back when with basic and advanced? Would the adventures be super-short and simple?

Years ago when I ran games in the store, one of my players was 9 years old, and she used to try to make friends with the monsters. We turned it into a mini-game called "Dungeons and Friends." It was pretty awesome.

In the Works: Baldur’s Gate: Descent Into Avernus Platinum Edition

There's some nice freebies in here. Check out this map: 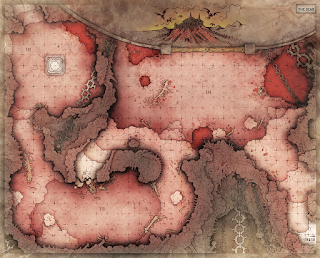 That's for an area in the Bleeding Citadel from Baldur's Gate: Descent Into Avernus. There's also a really nice map of Idyllglen.

These sets look really cool. If somewhere down the road I play with a real life group as opposed to an online group, I'll definitely get there things.

In the Works: Adventurers League: #Votepipyap 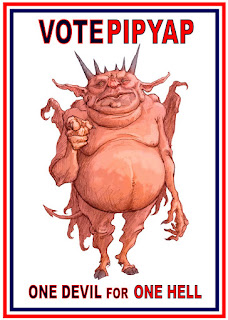 OK, this is weird. There was an event in Hell, Michigan, where an actor playing an imp NPC from the Adventurer's League became mayor for a day?? The event featured lots of D&D. Sounds fun!

There's an article on Baldur's Gate 3, which utilizes mindflayers (I think that, in this game, the mind flayers use nautiloids - illithid spelljamming vessels), are in the game.

Kind of bums me out to think that the DCA voice pack will probably never come out.

In the Works: Death Saves 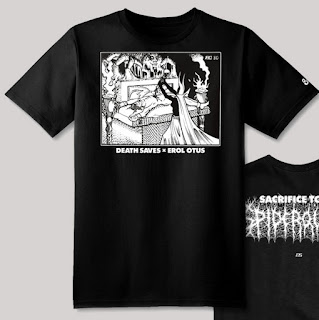 We get a look at some new D&D shirts from Death Saves. They're not messing around! Using some of that old 1e drow art.

In the Works: Wizkids Figures 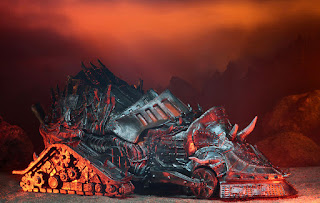 We get a look at some minis, including Arkhan the Cruel's minions and... a war machine from Avernus. How awesome is that thing? 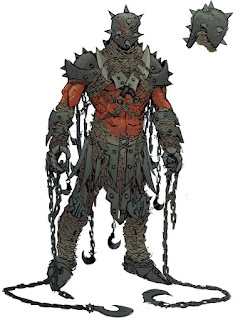 Artist Max Dunbar talks about making concept art for Descent into Avernus. He mentions that a lot of ideas didn't make it into the book, including a demon lord who has a war barge that sailed the River Styx! Sounds very cool.

Pictured above is his design of a blood war chain devil.

This article is all about what wizards wear, by Samantha Darcy. It has a number of designs in it. Apparently the author is making "The Adventurer’s Fashion Primer", though I can't find anything on it right now.

When I was first making my campaign world as a kid, I decided that everyone in my games dressed like they were in the revolutionary war. Long coats, those weird boat hats, powdered wigs. My players hated it and refused to dress like that.

I like to think that in my game there's still plenty of people dressed like George Washington. 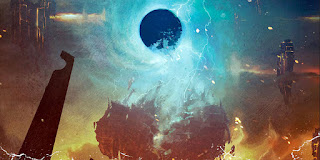 We get a discussion of the season linked to the Descent into Avernus adventure. We get the first adventure of the season, Escape from Elturgard, free!

It looks like this adventure deals with what happens in the realms once Elturel is pulled into Avernus. Overall, the story involves the adventurers exploring the different layers of the Nine Hells:

They "...accompany a mysterious young girl into the hellscape as she searches for hellrider souls that remain untarnished despite being trapped in Avernus." The hellriders are the paladins that accompanied the angel Zariel when she initially decided to go to Avernus to kill fiends.

I love it when they feature old content from Dungeon and Dragon Magazine, especially if they update it to 5e rules. Unfortunately, none of these are conversions.

There are a few old articles about using tanks and helicopters for Star Frontiers and Top Secret (talk about a deep cut). Then we get a 4e article including info on siege engines, one of which is an infernal embassy! Yes, it has a 4e stat block. Very cool. It shoots HELLISH METEORS.

I just imagine a hellish meteor flying at Raal from my 5e Hell's Rebels campaign and missing because he has an AC of something like 22. Curse you, Raal! Do not dare mock my hellish meteors!

The guest editor adds in one more article - a 1e class called the genin. A ninja!

Maps of the Month: Ghosts of Saltmarsh, Barber of Silverymoon, Six Faces of Death 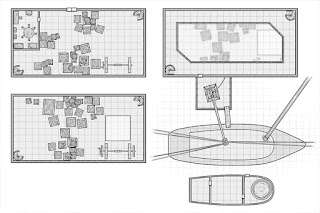 This is what I came here for! Some of those sweet, sweet maps, both tagged and untagged. 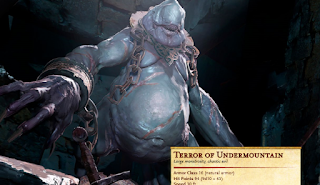 There was a contest awhile back for fans to design a monster in adobe photoshop. This is the winner! We get a pdf containing its monster entry. It has a disease bite and a claw attack. Apparently it was created by Halaster himself.


This issue's guest editor and Extra Life contributor, Chris Boyce, Discusses his campaign world, Sorceria. He paid a Warhammer 40k artist to make 12 illustrations for his campaign! Most of the art is in the article. Amazing.

He goes into the backstory, and then describes Sorceria as one of the great magical cities in the multiverse.

"At the city’s center, rising from a great hole in the earth, is the Master’s Tower, a colossal structure whose peak disappears into the clouds above the magical metropolis."

I'm 100% going to use this in one of my campaigns. Very awesome and tons of detail.

Good issue! Plenty of FREE STUFF, and that's what it is all about.
Posted by Sean at 2:27 AM