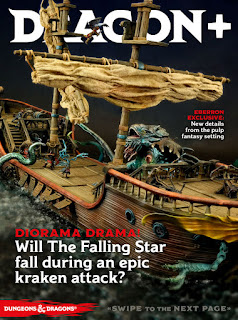 It's Dragon+ time! This month we have all sorts of stuff. The highlight, to me, is an absolutely epic map of the Nine Hells by Jason Thompson. That thing is unreal.

You can check out this issue right here. 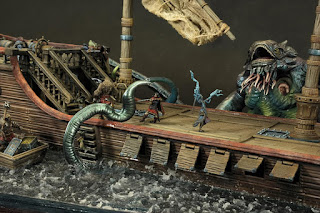 We start off with an interview with a dude who worked on the insanely awesome Falling Star Sailing Ship Miniature which I am seeing on amazon for $134. He discusses making a special pirate ship diorama, which includes minis and a kraken.

There have been a number of cool ship tiles and poster maps. My favorite poster map is this one by Mike Schley. Back in the 4e era, on of the "DM Rewards" for running games in the store was ship tiles, which I used so much they started to fray.

If you don't have $100+ to spend on a ship mini, you can find woodcraft 3d ships for just a few bucks. The only drawback is that you have to put it together yourself. I was lucky that one of my players, who played "Pirahna" Lana Redwater, Pirate Queen of the Shackles, liked doing puzzles. I paid her to put mine together. It was perfect for D&D minis. There is a how-to video right here.

After a section on the Eberron book, which includes a pdf of living spell statblocks, we get a section on a product I totally missed out on. A sapphire dice set commemorating the 45th anniversary of D&D!

“One of the d20s contains a laboratory-created sapphire inlaid where the 20 would be, and that’s the focal point of this set."

So.. the 50th anniversary of D&D is in five years! That's a very big number. Is that when we'll see a 6th edition? Do we need a 6th edition? I have no problems with 5e at all. I wonder if they have anything planned yet.

This article covers the custom Avernus sounds from Syrinscape. I use Syrinscape for my online games and I love it. I guess it depends on your group, but IMO using all of the sounds for different spells and attacks add a lot. Although I suppose your DM might get annoying with it, spamming grunts and things like that. 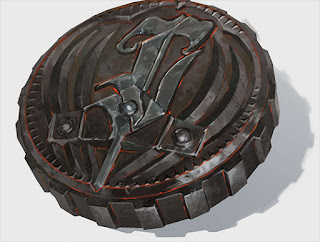 In this huge article, D&D designers talk about creating the infernal war machines for Descent into Avernus, and how they worked out the mechanics.

At first, they made the rules similar to the sailing ship mechanics in Ghosts of Saltmarsh. Ultimately, they decided to keep it simple, and treated the war machines almost like monsters.

I have run a few war machine encounters, and it works pretty well. I probably didn't have as firm a grasp on the rules as I would have liked, but that's on me.

I'd really like to sit down someday at a table, with a huge gridded poster map and war machine minis and run a proper epic chase with people jumping from one vehicle to another. 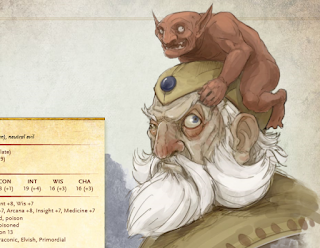 "...on the Player’s Handbook, for example, that’s no mere battle against a giant, it’s a fight with King Snurre himself! Similarly, that’s not just any beholder on the cover of the Monster Manual, but the Xanathar (later shown in all his googly-eyed glory). And of course, there’s Acererak raising hell (see what we did there?) on the cover of the Dungeon Master’s Guide."

So there's an adventure on the DMs Guild called Infernal Machine Rebuild. The dungeon in this adventure is the generic one from the 1e Dungeon Master's Guide! This dungeon has a famous statue in it - depicting Moloch, one of the rogue dukes of the Nine Hells.

this article explains that in the Age of Worms (!!) adventure path, there is a lich named Thessalar who created the thessalhydra, the owlbear, and other creatures.

The Temple of Moloch is Thessalar's home! I'll definitely check this out, sounds awesome. I'm pretty sure that the 1e DMG dungeon has been re-made in other editions before, but it's fun to see people's different takes on it.

We get a pdf of Thessalar's stat block. Very cool.

Kayla Cline: Sketches from the Mists 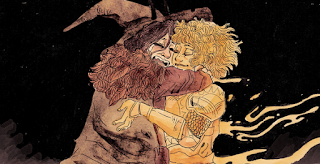 We are given a pdf of neo-otyugh stats and then we get a profile of D&D artist Kayla Cline. I've always wanted to see a 5e Planescape book full of DiTerlizzi art that intrudes on the text in weird ways, like in the old 2e boxed sets. I'd love to see a similar book with nothing but Kayla Cline art. This is beyond amazing. A complete map of the Nine Hells by Jason Thompson. I mean... holy crap.

We follow the route of 15 recently slain adventurers. Here is just a fraction of the shenanigans:
Seriously, this is one of the most epic pieces of D&D art I have ever seen. Unreal!

We get pdfs of the Alchemist class, all from 1e.

Maps of the Month: Baldur’s Gate

One of my favorite things about Dragon + is the maps!! This month, we get maps of the city of Baldur's Gate. Most of these are tagged and untagged versions of maps from Baldur's Gate: Descent into Avernus.

Good issue! I can't get over that Nine Hells map. It's absolutely amazing.