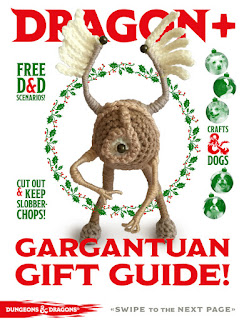 This issue of Dragon+ is the holiday issue, and thus it is full to the brim with products and ads. I've sifted through it as best I could to pull out the stuff that I think is most useful or interesting for the tabletop D&D people out there.

Most of this is just me blabbing about D&D, honestly, but there's plenty of maps and useful pdfs to grab as well! 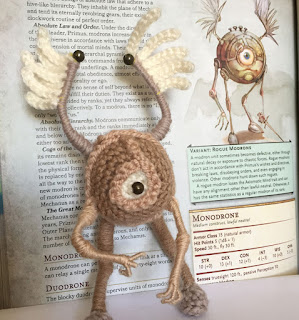 We get a massive interview with Mazz, who knits all sorts of D&D stuff. We see photos of the tons of stuff Mazz has made, including a bag of holding and the D&D ampersand.

Fun fact: Mazz made me a modron hand puppet! I call it M4ZZ. I have used it in my games a few times, but I've had a lot of ideas to do more.

I had been thinking of making it like a recurring character who had a real-life personality as my actual roommate, but then I think that might be too weird. Every once in a while, I give the M4ZZ NPC a test run... the verdict is still out.

In some far flung alternate universe, I am making youtube video D&D guides with this modron hand puppet hamming it up. 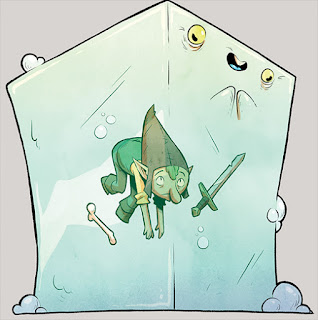 We get a big article on the new Dungeon Mayhem card game. It has a lot of art of Blurp the gelatinous cube, my favorite monster in the set.

Wizards sent me a preview copy of this set, and it is really awesome. Three decks, a big box, thick index inserts, counters, you name it. Seems like a very fun game! I love the art.

This one is definitely a blast from my childhood. There is now a D&D/Mad Libs book! Mad Libs is the game where you and a friend whip up a list of whacky words and insert them into a story.

When I was a kid, I had two competing elements for my free time: D&D, and going to my friend Sven's house. D&D weekends were spent usually at my friend Barry's house. We'd literally play D&D from Friday night to Sunday. It was crazy.

On other weekends, I'd go to Sven's house, where we would play baseball, football, and "floor balloon volleyball", until we died of exhaustion. Sometimes at night we'd play mad libs. As a kid, coming up with vulgar words and then listening as your friend read the finished product could be hilarious.

One time, I tried to cross the streams. I invited Sven to play D&D. He hated it, and actually left after just a few hours. I really don't know why. I guess it just wasn't his thing.

Years later, Sven's little brother Kevin started playing D&D with us. He was a funny guy. 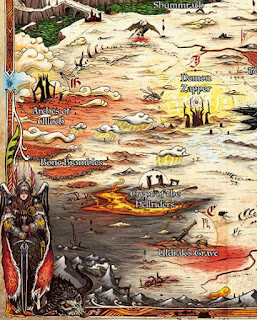 We get a couple of free map pdfs, including a labeled version of the Avernus map in Descent into Avernus.

We get a short article on Descent into Avernus. Chris Perkins talks a bit about how they aren't afraid of setting an adventure in Hell anymore.

Chris goes on to say: “I’m a big proponent of remembering where D&D came from but looking at it through a modern lens and with modern sensibilities."

What does that mean, exactly? What is different? What is a modern D&D adventure? I don't see too much of a difference. The new adventures are more sandbox-y, I guess.

I'm not sure what a "modern" D&D adventure should be. Shorter? Easier to digest? Should we stick to remaking old adventures or should we make new stuff?

The question I always come back to is this: How often do people actually play D&D adventures?  People buy the adventure book, but do they use it? Do they run it? Does  the campaign fizzle out or do they get through it?

It still seems like the biggest hurdle in D&D is forming a group that can actually play on a regular basis. If you don't have a person in that group willing to take the reigns and get everyone organized, it is just not going to happen.

We get a pdf version of the Blood War section of Mordenkainen's Tome of Foes, which is awesome. 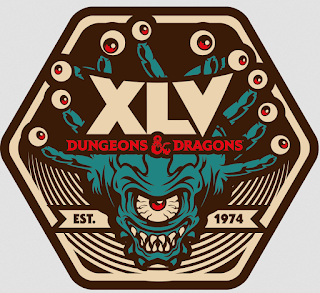 We get pdf versions of some old 1e articles on wishes, gems, and Nolzur.

Let's say 5th edition sticks around. What would you want the big adventure be for the 50th anniversary? Castle Greyhawk? That would be fitting, as it was the very first D&D dungeon (if you don't count Castle Blackmoor, I guess).

The problem with doing a Castle Greyhawk adventure is that they put out a mega-dungeon already in Dungeon of the Mad Mage, and I'm not sure how excited people would be about another one.

The story could be something dragon-centric. Maybe Tiamat finally escapes hell and chromatic dragons go on a rampage? The heroes team up with Bahamut and the metallic dragons to fight them off?

Maybe Vecna has some secret scheme linked to the mysterious pillars which have appeared in almost every published adventure so far? A sort of super-crossover, where the heroes travel to the many different settings that have come out? That'd be Barovia, Waterdeep, and Sharn or some other Eberron locale...?

Mordenkainen's Fiendish Folio is a product on the DMs Guild that updates some of the old 1e Fiend Folio monsters to 5e. We get a pdf of one of the monsters - the forlarren. Looks like it is linked to Fierna, one of the archdevls. Seems cool.

Next up is a "deleted scene" from Descent into Avernus. This side quest was cut for length from the book. I think it is an awesome idea to put stuff like this in Dragon+.

This adventure expands the Candlekeep section of the adventure and involves a very powerful magic staff. The pdf is here. 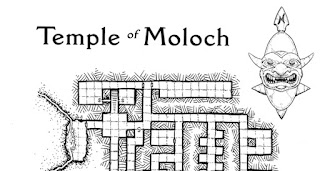 We get more maps from Descent into Avernsu, tagged and untagged. We also get maps from the Eberron book AND the Temple of Moloch from Infernal Machine Rebuild. Awesome. 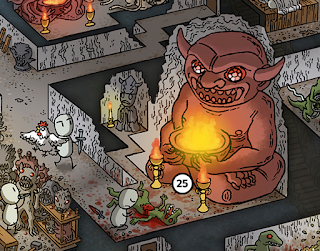 We get another fantastic walkthrough map by Jason Thompson. This one is of the dungeon in Infernal Machine Rebuild. This dude deserves so much more recognition than he gets. This map will make it so much easier to prepare this adventure.
Posted by Sean at 8:02 AM

If you're trying to lose fat then you absolutely need to try this brand new custom keto meal plan diet.

To create this keto diet service, certified nutritionists, fitness trainers, and chefs joined together to provide keto meal plans that are efficient, suitable, cost-efficient, and delightful.

Since their launch in early 2019, 100's of clients have already transformed their body and well-being with the benefits a smart keto meal plan diet can offer.

Speaking of benefits: in this link, you'll discover 8 scientifically-tested ones given by the keto meal plan diet.