What is Known About Mordenkainen's Tome of Foes 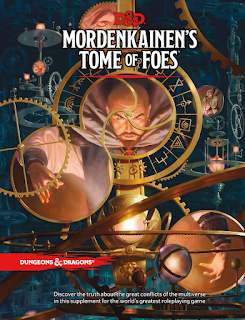 You can order Mordenkainen's Tome of Foes here.

The new D&D book is coming out in May! It's called Mordenkainen's Tome of Foes, and it going to be somewhat similar to Volo's Guide to Monsters. It has new monsters, new character race options and tons of lore.

What exactly is in this book has been discussed on a number of D&D shows so far. I watched them all and present them to you in text form via the series of tubes known as the internet.

Quite a bit of cool stuff was put out in playtest form months ago. A final version of these races will appear in Mordenkainen's Tome of Foes: 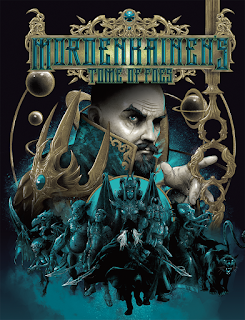 The overall idea is that this book focuses on grand cosmic conflicts. Mordenkainen, a legendary wizard, keeps an eye on everything and does his bet to maintain a balance. He believes that if one side wins in one of these conflicts (such as the demon wiping out the devils completely) then the entire multiverse might be in danger.

Mordenkainen leaves little notes in the book like Volo did in Volo's. Apparently, Shemeshka (a Planescape NPC) is somehow featured too. It was said on one broadcast that Shemeshka tole Mordenkainen's notes and cobbled them together to form this book.

As far as the tone of he notes, this was said: :Mordenkainen is very sassy."

This book gives tons of detail on certain races, factions, and conflicts.

Dwarves and Duergar: The origin of the dwarves and their war with the duergar.

Elves and Drow: We got quite a bit of information on elf-related content:
The Blood War (demons vs. devils): We get information on the blood war. Everywhere in the cosmos is a potential battleground. The book will include ways that the blood war can be intertwined with lower level adventurers.

Githyanki and Githzerai: There was a weird comment about gith art. "We can't use any old art from Dragon or previous adventures or OP event art..." Why? Their "..costuming is very different."

The book includes a painting of Vlaakith, the lich queen. She still leads the githyanki.

Halflings and Gnomes: The book also details Two unusual cultures that have no major conflicts - halflings and gnomes.

The gnome section includes lots of clockwork creatures like "A little robot guy with two shields" and "a little mechanical frog." There's a table for creating crazy gnome inventions, which sounds great.
Do you think they include giant space hamsters?

Half of Mordenkainen's Tome of Foes is devoted to new monsters. About half of the monsters in the book are Challenge 10 or higher.

Archdevils: There are stats for all of the archdevils (Asmodeus, Mephistopheles, and the others).
Moloch is also statted out.


The Idolin: The idol on the 1e player's handbook is iconic. What was it supposed to be? It is a monster first mae in 4e known as an "idolin", a giant animated statue. Supposedly, Dave Trampier (the artist of the 1e cover)  nicknamed it Molly, short for "Moloch". It does look quite similar to early depictions of Moloch.

Moloch: The deposed archdevil Moloch is statted out in this book.

Eladrin: There are eladrin in the monstrous section

Elder Elementals:  There are a number of "elder elementals" in the book. One is apparently known as "The Leviathan". These are city-destroying type creatures with power on the level of the Tarrasque.

I imagine this might include the elemental lords of good (Ben Hadar, Sunni, and the others) and probably a bunch of 4e primordials..?

Shadowfell-Themed Creatures: On one show it was noted that Volo's had a lot of feywild material. This book focuses on the Shadowfell. Some of the Shadowfell monsters are brand new.

Cambions: There are cambion variants - abilities you can apply to the cambion stat block

Cultists: Lots of info on creating infernal and abyssal cults. This book has add-on powers that can be applied to the base cultist stat blocks in the Monster Manual.
I'll be updating this with previews and information as I learn more!

You can order Mordenkainen's Tome of Foes on amazon right here.
Posted by Sean at 3:59 PM

On the interview with Kim and Jeremy, Kim explained that if they needed to redesign a monster, it would mean that they couldn't use any previous artwork. The Eladrin have changed, while in the case of the Gith very little has changed over the editions. Aside from some changes to their clothes, they are still the same.

I love your blog. It saved my ass when I was running Curse of Strahd over a year ago. I’m excited for this book. Planar baddies are my favorite.

I'm glad they're finally including Avariel.

I didn't like what 4th did to demote Eladrin from a set of cool outsider exemplar races, some of which looked somewhat like elves some of the time, to just 'elf, but happens to still come from a fey dimension'. I still don't like it, but if they made eladrin a player race, and if PCs could actually upgrade themselves to fey and archfey in game, that would be pretty interesting.

I agree that it would be awesome if they included Giant Space Hamsters!

i dont like that they keep spamming books, xanatar had 16 pages of names. lame

I am most excited by this announcement.
My home game is Planescape-esque. This Tome can only enhance it.

The playable Duergar was already in SCAG, so I guess that is a reprint?