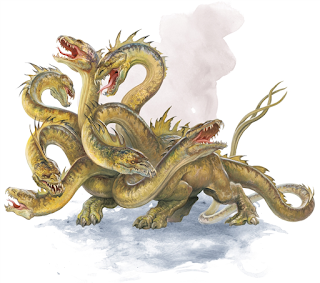 Episode 79: The Nightmare Scenario
Ross and Rachel are both guest stars this week. Last week's show was awesome, looking forward to what will happen tonight!


Nate got in on the show a bit late, but it didn't affect anything. Looks like Chris is running this from home. He's sick, but he's still running the game. Dedication!

Last time, Evelyn ended up in the tomb, Diath is in some weird version of Waterdeep where the yuan-ti are trying to recruit him. and Strix is in a maze with Ubtao. Miranda is in the yuan-ti temple with Paultin, Dragonbait, the animals, and vegepygmies.

Miranda creates a gloaming court, a safe place to rest. She asks Paultin about the ring of winter. She explains that the elves sent the ring away for a reason. Miranda doesn't think it's safe in his hands.

Strix is in the mazes with Ubtao. She's really angry about her situation. The Evelyn doll consoles her. 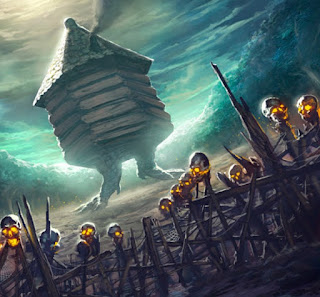 Strix hears something big coming toward her from the mazes. The trees that make up the maze split open. Here comes a hut walking on chicken feet. It's Baba Yaga's dancing hut!

Ubtao wants her to run, but she refuses. The Diath puppet is on her hat. 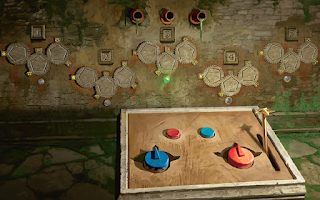 Meanwhile in the tomb, Evelyn comes to a room with a panel. She has the egg bomb that, if set off, will create a massive explosion of force damage.

She tries to calm down and prays: "Lathander, it's me. Evelyn your servant. I don't know what to do. I don't know why you blessed me with these people. Their souls are in danger, I don't know how to stop it.  I'm nothing without you."

She asks for help in deciphering the symbols on the wall.

Oh no. Guess who's here? Wumba..! Wumba tries to answer her prayer,  pretending to be Lathander but she sees right through it.

He sees the console and the black egg bomb. There are a few creatures heading this way - gargoyles with four arms. Wumba spits in Evelyn's face. I hate this dude.

Wumba starts messing with the dials. The nearby rooms shake and rotate. The gargoyles are no longer able to get at Evelyn.

Meanwhile, Diath has three yuan-ti ladies writhing around him. He asks them, "What makes you think I have an ancient soul?" He gets to his feet.

Fenthaza strokes his face and says he'd be so much prettier with scales.

She points him to a door that opens on its own. Fenthaza says, "We can't help you, you must face him alone." In the room is a rectangular room with a slab of stone with a bleeding dead body on it.  Looks like a tiefling. 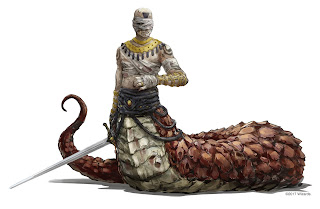 Ras Nsi is in here! Diath draws Gutter and he charges Ras Nsi.

Elsewhere, Paultin is hanging out. He can detect Waffles' sense of failure. Paultin tells her he's looking for a new group. Miranda points out that she lost  her group, too.

In the mazes, Strix spots Ubtao's talisman hooked on a tree and takes it. She looks at the maze inscribed on it and notes that there is no exit.

Strix remembers that Ubtai will grant favor to the one who can find their path through his maze. She traces her finger through the maze and gets a number of splinters. She tries to use her tongue to find her way through the maze.I can't imagine how painful that must be!

The air in front of her rips open... it's a gash in the fabric of the realm. She sticks her head in. She sees Diath. He runs right past her (Jared rolled a one on his perception check to notice her).Jared attacks Ras Nsi.

In the tomb, Wumba slips out of Evelyn's grasp. He tries to reason with her. Evelyn makes him flinch and he poops his pants a little bit.

There are pipes in here. Something is crawling through them. It's another Wumba..?! Ross controls both of them. A hashtag is born: #Dab4Dendar.

Evelyn tries to stop Wumba from hitting a button. She hits him for 14 damage. He presses a button.

Evelyn hits the blue button. Everyone in the party suddenly hears a sound like a PA system coming on. A third Wumba pops out.

Paultin agrees to sneak back into the yuan-ti lair using pass without a trace. Paultin and Miranda go down by the water, near the door that enters the yuan-ti lair. There's a giant serpentine creature in the water. Paultin heard it but can't see it. Here's a second head.. third.. fourth.. it's a hydra!

Paultin aggressively turns on the sun sword like Kylo Ren. a five-headed! He's going to fight it!

Chris loses his connection and Jared quickly takes over as DM, dispensing 80 potions of healing. Chris is back.

It's Ras Nsi's turn. Ras slices into Diath and drops him, but Diath is death-warded. He has one hit point. Ras Nsi slices into him again! He's dying. Ras constricts Strix.

The Wumbas form a battlestack. OK, that's pretty good. The stack is one foot taller than Evelyn. The Wumbas offer to help with the buttons and levers. All three Wumbas spit on Evelyn. Guh.

Miranda goes in to the dungeon and she can hear Strix screaming.

Strix misty steps away from the grasp of Ras Nsi and she drops a fireball on him. She kills him! His sword clatters to the ground.

Chris almost skipped her turn, but the chat set things straight. That was pretty big right there.

Evelyn converts one of the Wumbas to Lathander?!!? Hilarious. Evelyn tells Lathander that "Even the lowest of us are blessed by your holy light." Wumba is offended.

Evelyn pulls the lever.. the floor opens up. She and the Wumbas fall into the room where Strix and Diath are. No more Wumbas. And here comes Miranda and Paultin.

Paultin's down. Miranda heals her. She quickly picks up Ras Nsi's sword.

Miranda is sad.. her firends are dead. Evelyn walks over to Strix.

They hear ticking! The egg bomb!!!

Great episode! It was a surreal half-dream episode, but very cool. Chris actually split the entire party and made it work! Pretty awesome.

We talked about this episode on Waffle Talk with Anna Prosser Robinson! Was epic:

So, as a first timer here I wanted to say that your site is completely superb! We’re interested in starting a volunteer initiative in this niche. The tips on your blog were extremely helpful to us, as it gave us something to work on. Thanks.