More Thoughts on Running the Tomb of Annihilation 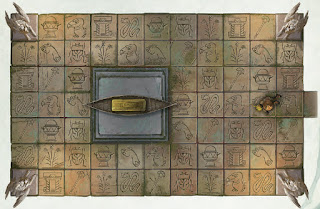 I ran some more Tomb of Annihilation last night and I have a lot of thoughts running through my head.

You can watch it on twitch here. It will be on youtube in a few weeks.

I got art of the epic aboleth fight from last week. Check it out: 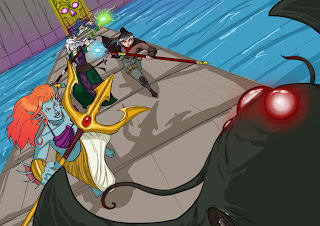 Pretty cool, right? It is by Vaughn Distrito.

When I first started using this artist, I really wasn't too sure about the comic book style, but now I'm very happy with it. It's a fun idea to have a different art style for each group. It's sort of like in 2e how they had one main artist for Dark Sun, another for Al Qadim, and another for Planescape.

Missing Players: Two players couldn't make it this week, so it was just Ramrod, Mistletoe, and Asana. We've had a death in each of the last three sessions, so I was definitely worried.

"Writing out" characters is something I don't worry about any more. Way back when, I'd spend time trying to think of a logical way to explain why they're gone or inactive.

Over time, I have found that the best way to handle it is to just move on. Otherwise, you'll end up jumping through hoops that can affect the session in weird ways. I never want to be in a position where an absent player's character dies. That does not go well at all, ever!

Handling the Tomb: There are a bunch of groups in the tomb at the same time. They've been leaving each other notes. I've been doing a lousy job of remembering what notes are where.

Basically, I've been missing a million little things, and it's driving me nuts. On the second level of the central stairwell, there is a plaque that I have repeatedly forgotten to mention or describe. It's got clues that would have been helpful to the heroes.

Using Roaming Monsters: Before the game, I had a tough choice to make. Withers and the tomb dwarves are supposed to come up and reset traps. Poor Lemuel died in the wine room, so that needs to be reset. From page 141: "At dawn the next day, Withers sends tomb dwarves to clean up the room and tunnel, after which the wine cisterns magically refill and the trap resets."

That means I probably should have started this session with a battle against more tomb dwarves, assuming the heroes go to check out the wine room. During their long rest, the adventurers heard the wine spill out of the room and cascade down the central stairwell.

A fight against tomb dwarves felt like a drag to me - a time-waster. There's enough to do in this place, right? I don't want to bog it down with a fight I've run a few times already.

I can and probably should be having Withers attacking the groups while they rest, but that would mean sessions full of battles with the same creatures, and I really want to get on with it.

Also... I was looking through the book to see where Withers might be lurking once his office was trashed. For a moment I thought I remembered that he was way down with the hags. It turns out I got mixed up. There's a guy named Mister Threadneedle down there. In my head, Mister Threadneedle is quite similar to Withers - a thin flunky that serves the main bad guys.

Mr. Threadneedle is described on page 183. He doesn't talk at all. 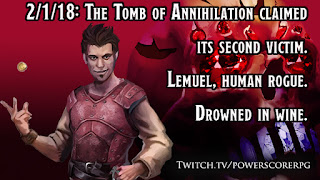 The group awoke and made their way to the wine room. Were they going to trigger the trap? They found poor Lemuel's dead body and grabbed the two skeleton keys. After a lot of careful searching, they drained one tunnel of wine and found a crawlspace within.

This crawlspace led to Nangnang's tomb on page 143. The deal here is that there's a magic circle holding an invisible monster (a grey slaad). There's a sarcophagus in here, too.

I couldn't remember how everything worked in this room, and scrambled to re-read it as I ran it. I had the slaad attack the group as soon as they stepped foot in the circle. Two notes about this place:
The slaad attacked the group, did piles of damage, but then the tide turned against it. It turned invisible so it could move without provoking a billion opportunity attacks.

Looking it up now, here's an official answer.

Looking at the invisible condition on PH page 291, it says: "For the purposes of hiding, the creature is heavily obscured."

Heavily obscured is one of those really annoying hard-to-find things in the PH. It's on page 183.  "A creature effectively suffers from the blinded condition when trying to see something in that area."

Room 57: The slaad ended up trying to plane shift away but it went wrong (he got sucked into room 57). Later, they freed the genie (immediately) from page 142. She also tried to plane shift and ended up in room 57! It might be fun to roll out the battle going on in there - otyugh vs slaad, winner fights the genie?

Later, the heroes encountered the giant stone head in room 18. The group was very cautious, which is a good thing. The hole in the mouth leads down to room 35b, one of the rooms I've had a really hard time getting a handle on.

The one thing I'm really happy with is that I remembered to use the purple mold (see "alien growth" on page 146). Mistletoe used a flaming sphere to destroy one patch at a time, causing others to sprout eyestalks and shoot rays at him.

He got very lucky! I rolled randomly, and kept getting the "slow" ray.

Flaming Sphere: One question that came up - can he control the flaming sphere without looking at it? He was in another room. I decided that he did need to see it. He's trying to run over patches of mold, it seems like there's a good chance he'd struggle trying to do it blindly.

The heroes ended up smartly going all the way around and finding the exterior of room 35b. I think I understand this area now, but just barely. It's something I will definitely need to re-read right before I run it.

I'll be running a special Spelljammer game tonight on Twitch! I'd better get preparing for that, now.
Posted by Sean at 7:50 AM

The Eye of Horus said...

My group is just about to enter the Tomb tomorrow! Ever since I first read Chapter 5 I have been looking forward to it, and I think it's gonna be really great.

Side note: I actually completely skipped the Yuan-ti for now. Once the party leaves the tomb, I plan on intertwining the Yuan-ti with some adapted material from Princes of the Apocalypse to create a crazy Yuan-ti Elemental Evil team-up that threatens to destroy the world through the elements and feed it to Dendar.

Really can't wait, and look forward to more ToA stuff from you! Would be cool to see how the final Atropal battle plays out for your group.