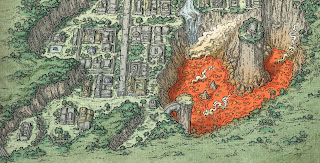 Episode 80: Kaboom it May Concern

Rachel has returned and will be playing Miranda again tonight! This was a heck of an episode.

The group rolls initiative. The heroes are in the fane of the night serpent. Lying nearby is the corpse of someone Miranda knew.

Evelyn says she's going to use the bomb to destroy the Soulmonger. Paultin goes invisible.

Diath realizes that this thing is going to explode in less than one minute.

Diath has a great idea. He wants Paultin to freeze it!

Chris has a real life stopwatch going. The players freak out.

Paultin thinks the waffle hut could survive the nuke. The group determines that there is no time to cast leomund's tiny hut. It takes one minute to cast.

Paultin casts suggestion on Paultin and tells him to call Shemeshka. Diath and Strix are really angry about this. Paultin forces Diath to use the key on Gutter to summon Shemeshka.

Diath asks Shemeshka for help. She says, "I have to protect my one percent." She casts banishment on him! He is shunted to his home plane!? Sigil?

Diath appears at an elegant costume party. There are humans, a tiefling, and gnome servants holding platters with flutes of wine on them. They're talking in small groups.

There's a band in one corner performing live. The ceiling is arched and has glass panels. Through the glass panels Diath can see .. a city above. He's in Sigil. Sigil is built on the inside of a hollow donut with weird gravity, so when you look up you see building tops.

Shemeshka puts a paw on his shoulder. Diath says he wants to go back, but she says that would be suicide.

Paultin declares that he thought this would work out a little better.


Estavan is here? Cameo! He's a semi-major NPC from the 2e Planescape products.

Diath tries to put the key in the blade of his sword, but nothing happens.

He puts the blade on himself and says, "If you want your investment, put me back..."

Back in Omu, Evelyn's flying down below in the caves with her boots of flying. She comes upon a boat floating on the underground river.

Strix starts crying. Paultin actually yells at her and tells her to try something. Miranda tells Paultin to step back. Paultin goes invisible and he takes a step forward and becomes visible, being somewhat menacing.

Paultin argues with Miranda, then uses his mandolin to fly after Evelyn. Yo...

Back in Sigil, Diath asks again... "How do I disable the Halruaan bomb?"

"You can't. It's too late." Shemeshka says two of the group will survive because of their bonus souls.

Diath looks up and sees a huge, weird clock. The hands are moving in weird ways.

He creeps up to Shemeshka and puts the tip of his blade in her back. Yiikkeesss. "Return me or save them all."

"What if you go back and you can't save them? What will you have gained?"

"I suppose I won't lose anything in the long run. But you owe me. Agreed?"

Diath hands over a key and appears back in Omu, right next to the Halruaan bomb. It's lying in the garden of a crumbled down palace.

Evelyn is outside in the Lost City of Omu. Sunlight reflects off her blade and shines toward a cliff far away. She sees Dragonbait leading the sidekicks and pets into the jungle, trying to get them to a safe place in case the egg explodes..

Evelyn sees the bomb.. she wants to grab it and fly up. Diath stops her.

Strix is in gaseous form. She shuts it off and casts gaseous form on Miranda. Wait.. no. Miranda points out she doesn't need that spell, as she can turn into a bird. They agree to fly out of there as fast as possible.

Outside, Diath notices that there's a keyhole on the bomb. Diath busts out his thieves' tools.. no, first he'll try a Shemeshka key. He sticks the key in. It turns. it clicks. The bomb stops. His key disintegrates.

The group is safe! Bomb is shut off.

Paultin says it all worked out and he doesn't appreciate the wrist slap. Paultin casts dimension door and ditches the party. He takes Simon with him.

Uh oh.... little yuan-ti Typho comes out of nowhere and stabs Miranda in the back... 32 points of damage from the sneak attack and 5 from the poison! Miranda survives! The group attacks him. She drops an insect plague on him and Typho is done for.

Diath calls out for Paultin. That's where we stop.


I have a lot of theories! Very good show. I agree with Paultin... they were all about to die. He saved them. Go ahead and be mad, at least you're alive!


We did a lot of waffle talking about this episode right here:

Small correction: Chris retconned the key disintegrating, leaving Diath with 4 keys left. He cited the fact that it didn't disintegrate from opening the Tome of Strahd in Episode 21.