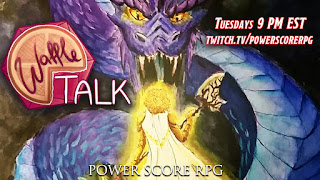 Most of you are probably aware that I've been recapping Dice, Camera, Action since the show began. I am a big Chris Perkins fan, and I really wanted to watch him run a game and see what I could learn.

Chris Perkins: I first became aware of this D&D author/entity called Chris Perkins when I was a kid. He worked on Dungeon Magazine, which I would get in the mail once every 2 months or so. He wrote two adventures in Dungeon Magazine that I was dying to run: Umbra and Bzallin's Blacksphere.

I ran a wobbly version of Umbra for my friends right after that issue came out. I sat on Bzallin's Blacksphere for two decades before finally running it for my 5e Planescape group a few months ago. Bzallin's is a very high-level adventure, so I found it very hard to fit it in to a campaign.

During the 4th edition era, Chris wrote a column called the "DM Experience", where he wrote about running D&D. I love those articles, though they're hard to find now. It was at that time that his stuff really resonated with me.

I was running tons of 4e, and I didn't know many other people doing the same. Chris would write about stuff I experienced, and his articles helped me figure out the best way to run 4th edition.

So I've been writing these Dice, Camera, Action recaps every week for a few years now. Every once in a while on twitter, one of the members of the show would interact with me. Each time, I'd get all cold and sweaty. I'd type out a response, then erase it and run outside while screaming.

Once I started running live D&D shows on Twitch, I knew I wanted to do a DCA post-show with some of my friends, who are also DCA super-fans. That's Scarlet Moth and Shauna Nakasone.

Scarlet Moth is a cosplayer and artist from Australia. She plays in my Tomb of Annihilation games. She's a very good player and I really admire her social media skills.

Shauna Nakasone is a cosplayer and artist. She plays in my Mezro/Omu/Tomb group. She's one of those exemplary D&D players that is always focused, is funny/fun to play with, and comes up with cool character concepts.

Both of them are big DCA fans like myself, so what the heck! Sounds like fun, right? 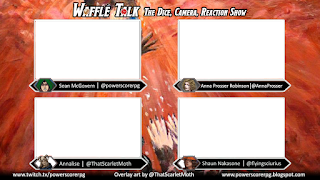 Doing the Show: What I did not expect was for the cast to go out of their way to mention it and promote it on the actual Dice, Camera, Action show! Our first episode of Waffle Talk got a heck of a lot more viewers than I expected.

The following week, some members of the cast expressed interest in actually being on the show! From that point on, I've been in a sort of dream-like trance. How lucky am I?

I'm not a show host. I'm just a dude who likes D&D. But..! Being a dungeon master gives you life skills! Running a game of D&D is like running a meeting at work, or planning a party, or hosting an event. You've got to wrangle people, keep an eye on everyone, and get through the event in a smooth manner while helping everyone enjoy themselves.

So, hosting the show is not a big deal for me. This is one of those occasions where I'm "DMing life". When I was a manager at a toy store and we had to move shelving around, I'd DM the plan-o-gram and give each worker a "quest". I mean, not literally, but that's what was going on in my head.

Not that I'm the best host or anything like that, but I am saying I can do it and get through it.

The technical side can be a bit of a pain. On one episode, my computer just froze. I have absolutely no idea what happened. I had to reboot. It sucked.

Then on another show, I had a minute where my overlay (the thing you see on the screen) messed up. It's a bit hard to explain. When using Skype to connect with everyone, I pull video from Skype and place it under the overlay. If that Skype page gets shifted for some reason, everything gets screwed up. My giant head will be half in one box and half in another.

So I'm a bit wobbly, but overall the show is going great. I got to talk with two of my favorite D&D stream people!

Guest Stars: Holly was awesome. I really want to pick her brain about Planescape and old versions of Strix, but I'm not sure how much most DCA fans want to hear about that. There's more pressing issues to deal with!

Anna was great, too. I was worried that I was wasting too much of her time, so I tried to end the show after about half an hour, but she actually wanted to stay longer! She talked a bit about a version of Evelyn that she used in a prior campaign (on Misscliks Outbreak, I believe). I had absolutely no idea about any of that!

Once those guest star episodes aired, I got a big pile of new subscribers to both my Youtube channel and my Twitch channel.

The best thing of all is that madi monimoliburb actually made us a logo out of the blue! How awesome is that?  I immediately stuck it on everything.

Overall: I'm not religious, but I feel very "blessed". Thank you to everyone who has supported me! I never thought I'd get to actually talk to Holly or Anna. It was surreal. It was sort of like watching Iron Man 2, and then Robert Downey, jr, looks at me through the movie screen and starts talking to me.

You can watch us waffle talk every Tuesday on my Twitch channel or on the Youtube machine.

If you have fan art that you want me to use on the show, send it to me, bah gawd!

Also, if you have questions about Dice, Camera, Action, ask them in the live chat or email them to me. Check out the DCA subreddit, too.

Thanks to everyone for reading this, buying my DMs Guild products and watching my goofy games. Because of your support, I am getting to do a lot of fun things and I greatly appreciate it.
Posted by Sean at 7:05 PM