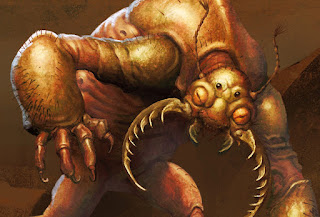 In this guide, we'll go through old products and try to dig up all the information on Umber Hulks that we can find. They're definitely a monster that is well known but not explored all that much. 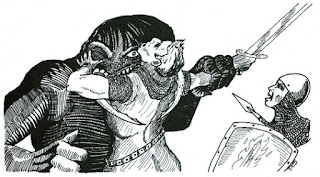 Here's what we learn:
Ghost Tower of Inverness 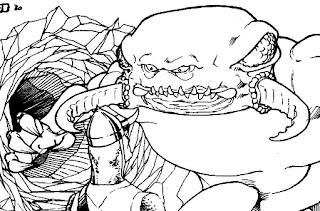 This is a pretty classic 1st edition adventure and contains a big dungeon. At one point, the group comes to a room with 5 tunnels leading from it. In this room is a locked iron chest that contains a pile of gold and a key they need.

Unless they leave the room immediately, there's this:

"You hear a rumbling sound from the southwest; it sounds like huge quantities of earth falling in the room, perhaps it is a cave-in."

And then.. "Any character who turns to look at the source of the noise - or asks the DM what it is - has looked at an umber hulk." 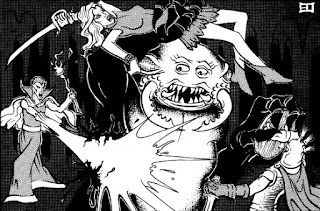 They helpfully give you the confusion chart. Roll a d10:
Fighting it while averting your eyes gives you a -4 to hit.

It's kind of weird that this encounter early on in the adventure is given two pieces of art, one of which is on the title page. 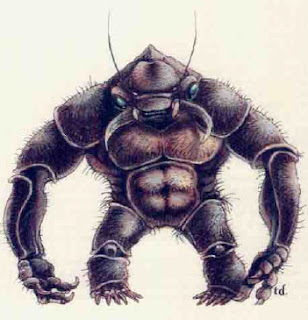 That's the Tony DiTerlizzi umber hulk. He's one of m favorite D&D artists. I think he did an awesome job actually depicting what a gorilla/beetle might look like.

The entry is similar to 1e, expanded a bit:
Vodyanoi: This is an aquatic variant of an umber hulk. They have only two eyes and thus they don't have the confusion power. They can rend the hulls of vessels. They can summon 1-20 electric eels!

In 2015, Tony Diterlizzi did a sketch of a new kind of umber hulk: 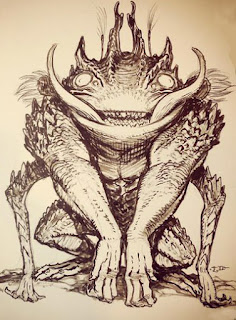 Seems like that could be some sort of umber hulk lord.

This adventure is about a wizard's lair that's been abandoned (Asflag the wizard is enslaved in the Gray Wastes). In the lair is a zoo full of weird monsters that have gotten out, some of which are hunting in the city. The group needs to go to the lair and get things under control.

It's a massive place. In Asflag's library are some spell books. One spellbook has a magical trap. If you open it without uttering the passphrase, it summons an umber hulk. It appears in a thunderclap and proceeds to run amok for d6 rounds, and then is banished back to whence it came.

Dragon Magazine #152 - The Ecology of the Umber Hulk 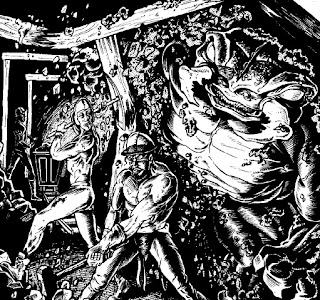 This article is written as if it was an excerpt from a fictional book, "Creatures of the Earth's Deeps", by the sage and wizard Archmyel. Lots of factoids:
Spelljammer Boxed Set 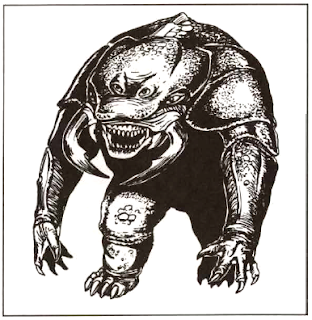 Now we're getting to the good stuff!

The neogi are evil little slavers, spider-eel things (they are in Volos' Guide to Monsters, page 179). Their race has enslaved many umber hulks. Each neogi has a personal umber hulk slave that is used as a bodyguard, manservant and useful set of hands. The slaves have a tattoo on their left shoulder, front and back, which denotes who their owner is.

The hulks are trained from birth to care for their every need. A neogi who loses their slaves is considered an outcast until it regains them. If they don't, they lose all social status and become a slave themselves.

Dragon Magazine #214 - Ecology of the Neogi 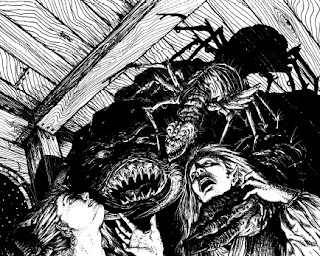 This issue has an extremely grim story about what happens when you get captured by neogi slavers. It's something akin to a snuff film without the snuffing. We learn:
Good article! 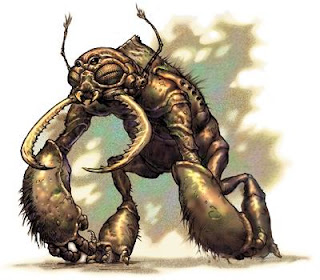 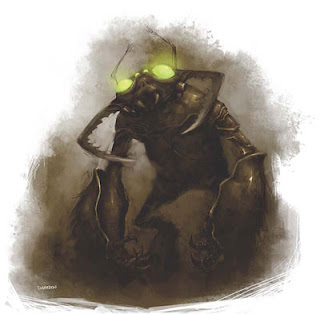 These things live on the plane of shadow. Black and gray armor plates cover their body. This entry is virtually identical to the one in the monster manual, word-for-word. 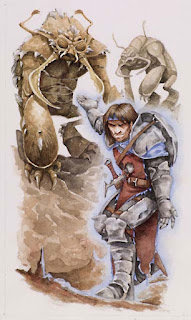 The hulks are led by an umber hulk with a crystal growing out of its head. This crystal gives it special psionic powers. Its main power is a "psionic lion charge" and ability that lets it make a charge attack.

Its head is large, with knobby crystalline growths jutting like a crown of horns from its skull. When slain, its body comes apart, revealing a crystal skull.

This book has rules for making monster characters. The can be useful as long as their driving hunger and nearly constant need for destruction can be assuaged.

They definitely weakened the hulk a bit. Suddenly, tremorsense can only detect people within 10 feet. They don't even have confusing gaze until they hit level 7. They speak the language of "Umber Hulk." 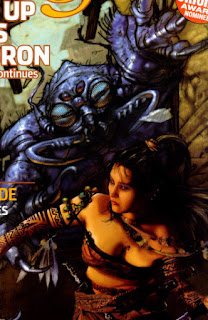 This is one of my favorite adventures of all time. It's part of the Shackled City adventure path, set in the city of Cauldron (a city built in a "dormant" volcano).

The group is minding their own business on Magma Avenue when an umber hulk pops out of the ground. There's a lot of people in the street, and they're all hit with the confusion gaze! Pretty awesome encounter, right?

There's a woman holding a baby which is about to fall out of a window, a fruit merchant who absolutely refuses to leave his fruit cart, a criminal who takes advantage of the chaos, and more.

There's an article that lists components for spells and magic items. One of them is umber hulk eyes. They are worth 500 gp and are a component for the spell called Vision. 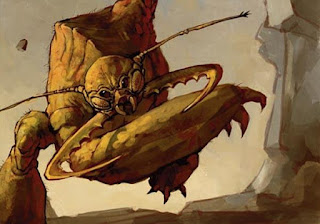 In 4e, they don't speak but they understand Deep Speech.

Shadow Hulk: They are a variant whose gaze causes victims to attack their allies. 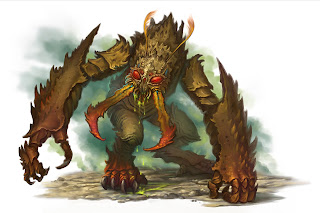 Lots o' flavor:
Umber Hulk Tunneler: It has the ability to "snatch and tun." If it hits with a claw attack, it can drag that creature up to 25 feet. Rebuffing Gaze: The victim take psychic damage every time they move 5 feet closer to it.

Umber Hulk Bewilderer: It has a stunning gaze... yikes. Also has a staggering gaze that does psychic damage and slides victims up to 25 feet.

This is a fantastic adventure from the Scales of War path involving the group battling Chillreaver, a two-headed white dragon.

As the group makes their way through the glacier lair of the dragon, they come upon a cavern with a rift in it. This is home to four "icetouched" umber hulks, which are almost identical to regular umber hulks aside from the name.

I remember this encounter being very challenging for my players.

It's so weird when they do ecology articles on the same entity in different editions. There are so many monsters that need development. Why would they do the same one twice? Umber hulks dig tunnels that neogi use to secretly travel in.

This is an adventure dealing with the amusing goddess of the kuo toa, Blibdoolpoolp.

As the adventurers make their way through her shrine, they come upon a few large chambers where umber hulk tunnelers lurk, along with a cloaker. The kuo-toas fear these creatures and don't patrol this section of the dungeon.

Later on, the group meets a band of really insane kuo toa who are worshiping the shell of a umber hulk. 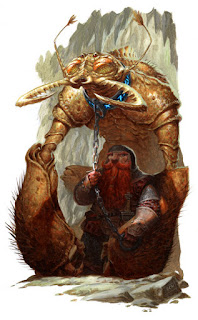 Those who survive an encounter remember little due to the confusion gaze, which scrambles their memory. Their body can withstand cave-ins.

Princes of the Apocalypse

Claws of the Umber Hulk: Magic item! These claws always comes in pairs and act as magical longswords. Once you are attuned to them, you are proficient with them, even if you're a wizard. They give you a burrowing speed of 20 feet.

Out of the Abyss

There is an umber hulk encounter where it bursts out from behind a wall and attacks the nearest party member. That's all I can find in this adventure. You'd think they would have done more with them.