Dungeons & Dragons – A Guide to Baphomet, Demon Lord of Minotaurs 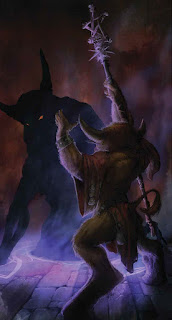 I can't help but notice that Xanathar's Guide to Everything is extremely popular. Tons of people are pre-ordering it! From what I can see, I think that book is going to be a big deal.

Today we’re going to put together a resource on Baphomet. There’s ideas spread through many different old books, and I’ve done my best to pull them all out and put them in one place. If you ever use Baphomet in your campaign, this should give you a bunch of concepts to work with.

If you want just one source, I think that Dragon Magazine 341 has the most information in it.

Baphomet has an ogre’s body, a bull’s head and he is covered in coarse black hair. What we learn:
Monster Manual 2 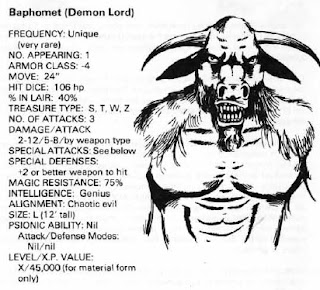 
Baphomet gets a whole stat block and everything.

Baphomet has been captured by Orcus! He’s being kept in the dungeons. “This is the result of a rare (and no doubt temporary!) alliance between Orcus and Yeenoghu.” While Baphomet is imprisoned, Yeenoghu is looting Baphomet’s realm.

Baphomet must stay until he slays a certain number of creatures that intrude. When the group meets him, he needs to slay just one human and then he’s free. He’ll immediately teleport to his home.

They detail a bunch of mazes.
At the end, a huge iron golem greets the visitors and welcomes them to the castle of Orcus.

In 2nd edition they say that Baphomet is a lesser god, in addition to being a demon lord.

It gives a possible origin of the minotaurs: a curse condemned a number of wicked humans, which drew Baphomet’s attention.

He can’t send avatars to the Material Plane. They have to be gated in by evil wizards.

Baphomet can grant minotaurs the power to cast maze or wall of stone. When they do this, there’s a 1% chance that they are plane shifted to Baphomet’s realm. 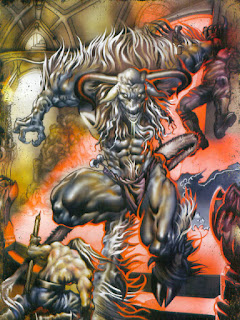 This article is huge. We learn a ton of stuff:
Allies:
Enemies: Yeenoghu, Graz’zt and Orcus

Thralls get powers:
Minions of Baphomet: We get a look at some demons who serve Baphomet.

Ankshar: This thing is a combination of a bull, a man, a bear and a reptile. If it bites you, you get a disease called “warpflesh” which deforms your body. It also has a “gaze of madness”, which... you know, it looks at you and you go nuts.

Her castle looks like a tower made of skeletal hands sitting in a circular plain of bones. Inside are galleries of the flickering shadows of her victims.

Here’s a little nugget for you: Pale Night often passes through a gate to Androlynne, where she spends a great deal of time toying with a generation of trapped eladrin children. 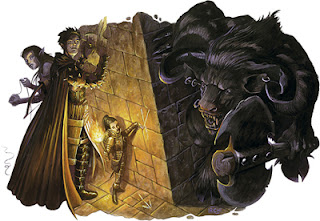 The Endless Maze: Connects to the Puzzling Hedge of Shendilavri (that sounds really cool) and the Valley of the Crypt Things on Thanatos.

When Baphomet was conquering this realm, he found Pale Night’s castle and she “somehow managed to suppress his rage enough to propose a pact that has lasted to the current day.” 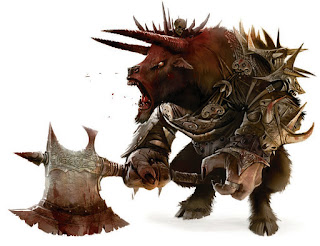 Baphomet is statted out in this book. Little bits of info:
D&D 4th Edition – Dragon #369 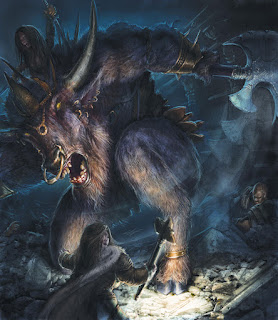 They did a demonomicon article in 3e, then for some reason they did another one in 4e. That’s weird, because there are so many demon lords that haven’t been fleshed out. Factoids:
Origin of his Beef with Yeenoghu: Baphomet was a primordial who led armies against Kord, Erathis, Melora and Pelor. He fought alongside Yeenoghu. Yeenoghu fled the battle and hung Baphomet out to dry. Baphomet chased after him and ha been chasing him ever since.

We get stats for the aspect of Baphomet. He gets bonuses against bloodied opponents (opponents missed half or more of their hit points).

Exarchs of Baphomet: He has some cool flunkies:
The Endless Maze: Some updated info:
Baphomet’s Servants: Carnage demons, balors, abyssal dragons, and glabrezu. Many mortal cults that Baphomet helps to “embrace the inner beast.”

Oostarix, Eater of Men: A minotaur who clawed his way to power in a minotaur fortress called Patoorn. He wants to be Baphomet’s main sidekick. His body is covered in tattoos and scars. He is a despicable villain.

The Knights of the Horned King: Virina Tabois leads a society of learned people who oppose civilization. They undermine law and dismantle progress. She is a priestess of Erathis by day, but in truth she hates Erathis.

Baphomet’s Fiends: We get some new demons that serve Baphomet:

This book has some really cool minotaur variants, all of which are part of the Blood League, warriors that steal the power of other creatures by consuming their still-beating hearts. They sometimes work with mind flayers (!).
D&D 5th Edition - Monster Manual 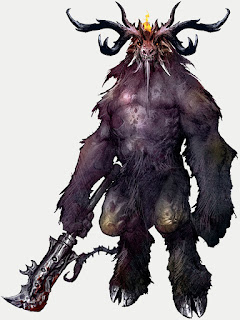 In the minotaur entry, it says that minotaurs are descendants of humanoids transformed by cult rituals. The cults worship Baphomet. Baphomet turns them into minotaurs.

These people who join the cults are looking for power, or they want to be free from authority. They can breed, giving “rise to an independent race of Baphomet’s savage children.”

5th Edition – Out of the Abyss

They changed the way he looks. I like it, the others were pretty forgettable. All sorts of information:
There you go! Minotaurs are pretty cool, I think they're a bit underused. You can definitely make a good adventure out of this stuff.
Posted by Sean at 3:42 PM

This was super well researched and a ton of fun to read!

Amazing man thanks a lot. Plan B for when the charge the gates brigade wipe and wake up in HELL er Abyss

Fantastic as always. Love these deep dives into the D&D lore.

Dank Dungeons: Thanks! Baphomet is relatively easy because he hasn't been used that much.

Jon Bupp: Thanks! There are a lot more on the way.

Timothy Brannan: Thank you, there is a pile I am planning on doing. I'm going to try to squeeze in Acererak before September, I have a lot of things I'd like to know about him. I think he actually time-traveled in the 4e Revenge of the Giants adventure.