I've been meaning to check this out for a long time. It is D&D Beyond, an online D&D program where you can make characters, look up stuff and make monsters, spells and magic items. One of the guys who works here was one of the only survivors of the Chris Perkins meatgrinder at the Stream of Annihilation, which was pretty epic.

In 4th edition, D&D Insider was the best thing ever. You had access to every monster made for the game, and the character builder was so useful that most of my players never once made a character by hand. D&D Beyond seems to be the 5e equivalent.

Signing Up: When you sign up, you do so through the twitch game-streaming service. Apparently the company that made D&D Beyond is owned by Twitch, and Twitch is owned by amazon. I watch Dice, Camera, Action on twitch every week, so I should have signed up a long time ago. Here's a message I got right away:

I feel like a kid who just moved to a new school district.

Compendium: This is the srd. All of the basic D&D rules. The magic items list is gigantic! Very useful.

The rules I have the hardest time finding are the swimming and drowning rules. Swimming is right in the combat section. It doesn't have drowning information. That is in the "environment" section, under 'suffocating'.

Let's check out the monsters..

Wow! You can organize them by type, search by environment (!). That's very handy.

Hey! It's got the art and everything. It's a little weird how they stuck the armor class next to the challenge rating, a little disorienting. AC 20! People don't use dragon turtles very much. The best use I ever saw of them was in the Pathfinder Skull & Shackles path. The group is in a boat race with other pirate ships and a dragon turtle pops up, very awesome.

This monster is so powerful that it's a bit hard to use until the group gets way up there in level.

Monster Creation: Let's see this create-a-monster thing. You can create one from scratch or base one on an existing monster. Let's see an orc. 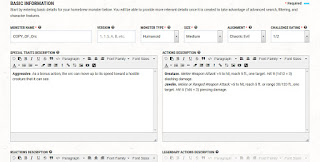 Wow.. you can edit it however you like! That's really awesome.

I'm tempted to pick "Alumnoch the pink unicorn", but I assume you want something semi-serious here. An amber golem! You could stick a vestige in there, how awesome would that be?

It says at the bottom that the amber golems are created by spellcasters to track other creatures. They are usually in the form of a lion or a tiger.

I think there is a ton of material I can use in my Planescape campaign. Let's make a list:

Alumnoch the Pink Unicorn: It has vicious mockery! Hilarious. The unicorn heckles you. Description: "The pink gorgeous unicorn from Lewollyn soars through the skies with the help of his majestic mane and tail."

Ancient Red Hydragon: A hydra/dragon?! Whoa.. challenge rating 30. That's too high.. Demogorgon is what, a CR 25? Very cool idea, though.

Contract Devil: I worked on these for my guide to devils. I found it very hard to make rules for the actual contract. I think Pathfinder did it best. This stat block doesn't have rules for contracts.

Cthulhu: Wow. Also a CR 30. If Cthulhu is killed, R'yleh sinks back into the depths. I think that this monster needs a madness chart! Right? More than any other entity out there. Lots of fun details in this entry, lair actions and everything.

I skipped to the last page. The very last monster is Ysgrove the Unkillable, a blue dragon. He's CR 30, too!

I'll filter it for monsters appropriate for my planescape group. That's a challenge rating of 8.

Chained Angel: This sounds cool. Really nice description on this one! "These angels have been captured by fiends, tortured and turned to serve darkness. A pack of chained angels is considered a status symbol among the servants of evil." If you kill one, it will either reward you with a spell effect or become a storm of destruction. That's great!

I'd want to rescue them, not kill them.

Hill Giant Butchers: Do they have giant meat cleavers? They do! When in their kitchen, they get lair actions.

There are a lot more cool ones. Lava dragon, mindflayer corpsewalker, skeletal tyrannosaurus rex, treasure golem and.. The Mother of Squorms. What is that? Let's see.

The Mother of Squorms: She's a horror created by the pollution of alchemy labs. She has "horrid fertility", she breeds asexually, spawning dozens of squormlings after every large feeding. Well, I'm sold! Just the name "squormling" is enough to win me over.

Character Builder: OK, let's look at the character builder. I imagine this is the thing that will get used the most. I really don't want to hand-make a character. Let's randomize! I am going to make a level 9 goliath warlock. I like goliaths, I guess they're my favorite race. And warlocks are cool.

I need a name. Let's see, something stupid. This page has a list of craptastic names. Henry Cooldown, that's pretty good/bad. Or bad-good. Dingo Egret! That's great. Darkdeath Evilman!!! Wow. Trevor McFur. If I was making a tabaxi, that would be a shoe-in.

There's so many!!! Cream the rabbit? Let's go with Hot Coldman. You pronounce it "Cold-min." Maybe it should be Hawt Coldmin.

I have a 6 Wisdom! Why?! Hawt Coldmin is not optimized. I guess I can get into that. He's got a 16 charisma.

They picked my spells. Nice! I have counterspell to shut you down. Banishment.. contact other plane! Very cool.

They did my background, too. I was a soldier. I have a military rank. Soldiers recognize my authority and influence. I can requisition horses and etc. Officer Coldmin!

My alignment is "unknown" for some reason. They left bonds, flaws, and personality blank.

You have to pick equipment, they don't randomize it.

I can speak with animals at will, and I can disguise self at will. What the heck is gaze of two minds?

It's here. Wow. Haüt Cold'mynn can touch a creature and see through their senses. I can sustain this by using an action each round. I'm blinded and deafened while doing this.

Clone Hero: That sounds cool. It's a level 8 spell that creates a hero that will fight for you for 24 hours. Awesome idea, but it is very vague. What are its stats? If it's an 8th level spell, it should be pretty powerful. Maybe like a blackguard from Volo's or something.

Dark Maiden's Moonfire: I like the way this one is written. You summon the moonlight, which illuminates the area around you. When you want, you can use an action to hurl the moonlight and do radiant damage. That's really great! It's a cantrip, too.

Remove Hand: "This spell lets you remove one of your hands and control it while it is separated from your body." Sold! 100%!

Homebrew Magic Items: This should be good! Let's do my favorite, wondrous magic items.

Endless Keg of Mead: It has 30 gallons, refilling itself at dawn. If it is not used for five days straight, it is destroyed. I like that a lot.

Traveler's Chest: A chest that follows you around, like a drow crawlchest. Very cool!

Headband of Goblinkind: You gain the goblin ability to disengage or hide as a bonus action once per rest and you can speak and understand goblin. But you can't speak or understand other languages except thieves cant and the Druidic language. That's pretty rough for an item requiring attunement!

D&D Beyond is extremely useful! Why wouldn't you use it? It's full of ideas for you to use in your game. I immediately saw a bunch of things I would want to put in my campaign.

Official Release: D&D Beyond is set to officially launch on Tuesday, August 15th.

Through D&D Beyond, you will be able to buy digital sourcebooks like the Player's Handbook or Xanathar's Guide to Monsters. The core books will be $20 for the first week of launch, then it goes up to $30.

There are subscription options:
I'm a little confused as to how the subscriptions work with the digital books. From what I am reading, you don't have to buy the books to use it, but the books add content..? You can use the books offline. I don't know if they are pdfs or if they are locked into an app or something.

My first instinct was to turn my nose up at people complaining about buying the books again, but I see that some people have already bought the physical book and then they bought it again on roll20! I can understand why they wouldn't want to pay for them a third time.

It's a very useful set of tools. D&D Beyond is definitely worth a look!
Posted by Sean at 12:14 AM

That was the biggest issue I found with D&D Insider; it completely chilled any potential 3PP development.

Regarding the books, If you search for monsters which are not in the srd,
they show up but access is blocked. So my guess is you simply unlock their content on the webpage/in the app.

Otherwise it's extremely useful! My players just battled 3 young black dragons from the back of an ancient silver dragon, and I let them play the silver one. I didn't have prepared the fight, so I just gave them the MM and used Beyond on my phone for the blacks! It wa an awesome (if pretty quick) fight :D

Chained Angel is directly from Tome of Beasts. It's open content, so... Not sure how the SRD interacts with D&D Beyond.

Excellent Blog! I would like to thank for the efforts you have made in writing this post. I am hoping the same best work from you in the future as well. I wanted to thank you for this websites! Thanks for sharing. Great websites! dnd dice

I like the way this one is written. You summon the moonlight, which illuminates the area around you. When you want, you can use an action to hurl the moonlight and do radiant damage. That's really great! It's a cantrip, too. summer bed sheets , king size comforter size , gul ahmed bed sheets online shopping , bed sheet fancy , cotton duvet cover