Adventures in Eberron - Strahd in the Shadowfell 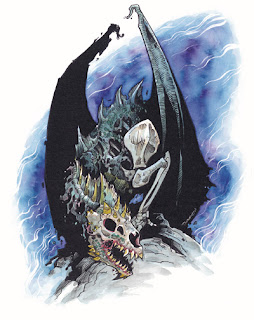 George's work schedule changed and Jessie has all of these Korean music concerts she's going to (she's going to see G. Dragon) so we've missed a few weeks. Hopefully we can work out a new time in a week or so.

We did play some Eberron yesterday. I'm a player in that one. My character is a 10th level sorcerer.

Character Arcs: Somebody asked me about character arcs and if I do them. I don't! Usually that kind of thing works out on it own. I feel strange talking about a character arc in D&D - the character is not my domain. As the DM give them situations, they declare how they react to them.

It got me thinking about my character's perspective. My guy is a gigantic, jolly, hairy sorcerer. The wizard of our party is a basically a studious librarian.

There was a point in this session where we went to a (vampire) party, and my character started to live it up. I figure that the wizard was going to try to make a beeline for a library in another room. I gave her a big speech, something like: "You know, we could be dead tomorrow. Remember when I wrestled that bear and it kicked the crap out of me? Remember when I literally got killed by a troll?! You need to enjoy life while we have it!"

It added a lot, at least, to my enjoyment of the game, so maybe I'll rethink how characters experience D&D and what I can do to make it deeper.

The Dracolich: We were in the Shadowfell. A dracolich attacked us. We spread out and I got breathed on for 72 points of damage! It was horrible. I have 82 hit points total, so I was still up.

This dragon was a white dragon in life. I forgot about that, and cast cone of cold. It did absolutely nothing.

Thankfully our fighter does a pile of damage with ranged attacks and we were able to take it down. It kept its loot in big hollow gem containers that were buried in a grave. We dug them up and decided not to open them until we were somewhere safe.

We had what we came for - two feathers of the Raven Queen that would allow us to repel the pending assault. Orcus and Lolth are trying to get into Eberron!

Vampire Party: We start heading home and we find a carriage waiting for us. It's drawn by two horses and there's no driver.

We didn't trust it. I was in favor of us using magic to fly back to the portal. I stopped in my tracks and had a teeny tiny existential crisis. Does the DM need us to use the carriage? If we don't follow this lead, are we missing out on cool stuff? Would my character do what I want to do?

The DM pointed out that there's wine in the carriage, so my character jumped in.

We took the carriage to Fallcrest where there was a big vampire party going on. The servants were zombies. When one vampire mistreated a zombie and slapped its head off of its neck, my character got offended. I stuck the head back on the zombie and gave her a bad Sean Connery-voiced dressing down which included me saying: "You blood shucker!"

We met this mysterious first warden, ruler of the entire Shadowfell (?). Guess who it was. Strahd! Strahd with an eyepatch?! 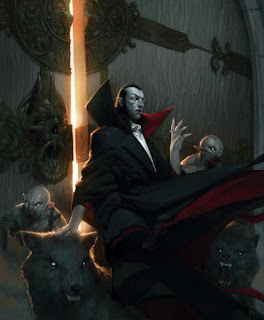 This campaign is linked to events in our 4th edition campaign from years ago. In our campaign, Strahd killed Vecna...! Also, apparently, Strahd is a close ally of the Raven Queen.

I love D&D lore and "official" NPCs so I was pretty bowled over. Strahd tried to convince us to take him to Eberron with us, but we weren't having it.

We were able to get home. We fired up the D&D hot tub (we obtained some magic heat boulders from a giant lair a while back) and set about opening our gem containers. We decided to open the gold one last, as that probably had the best treasure in it.
I've run into a problem. Attunement! I have too many items that require attunement. I can only have three going at once, and none of these new items feel like they should be swapped in. I guess we can use them when it seems appropriate, but we'll need an hour to attune first. It seems hard to make that feasible.

What was in the gold egg? A stinking cloud! I took 40 points of damage, dangit.

That night, there was trouble. Agents of Orcus had somehow gotten into the city of Sharn and were killing people. Mohrgs are undead with intestines that are like blood-sucking snakes.

We ended up in a battle where we were all split up, each fighting a mohrg on our own. I thought that was really cool. I think I want to try to do that. I'm always wrestling with keeping encounters interesting and not letting it devolve into an exercise in number crunching. This seems like it would help.

I cast fly, grabbed my mohrg and took to the air. Nearby was a church of the silver flame, which actually had a flame burning in honor of their god or whatever it is. I chucked the mohrg into it. It was awesome.

Our wizard had a pretty epic battle inside - this band of mohrgs were breaking into the apartment she lived in. The fighter kicked the crap out of his. That's about where we stopped.

I really enjoy the use of Strahd, Orcus, etc. and I like experiencing Eberron fresh.

We hit 11th level, so now I'm getting to experience what it's like to play a high level character. It is really fun to have all of these awesome spells at my disposal.

I have absolutely no idea how these mohrgs got to Eberron. Maybe we'll find out next time.
Posted by Sean at 1:31 PM