This is a really good issue, like the last one. It seems like they're finding their groove. There are some good Tomb of Annihilation notes in here!

Editorial: Bart Carrol says that the fiction in the previous issue was very well-received. 60% of the readers said they wanted more, and another 30% were fine with it.

Starting in issue 15, Adam Lee will be writing an ongoing story about the jungles of Chult.

I'm fine with the fiction as long as it isn't too long. I will like it if it adds to the lore and the Tomb of Annihilation story. It would be great if it has ideas I can use in my game.

He gives a nice list of the weirdest things characters have found in D&D games. Chris Perkins found a dead clone of one of the characters in the party.

Cover: We talk with the cover artist who makes gif art. He does some really cool stuff. Very unique!
He's Nicholas Little.

D&D in the World: There's an article on playing D&D in different countries. In South Africa, rent is really high, so game stores can't afford to have space. I didn't know that Japan has severe housing problems.

Story: This story is all about events tied to the Tomb of Annihilation.

There's a guy named Alfin Biscop who is a "living man molting into undeath" due to the raise dead curse. He has poison that "came from the tail of Geryon." How the heck did he get that? This poison has no antidote. Pretty cool!

Then we get a ridiculously awesome NPC near the end. A person named Rokh Manti is sailing through the Positive Material Plane..! Rock has a "golemic craft." Rokh's patron is Kwalish, maker of the apparatus of Kwalish. He repels some xag-yas with a blast of negative energy. Rokh is apparently a brain inside a construct, very awesome.

Rokh is investigating the trail of energy that is affecting raise dead. The energy meant for Toril (the world of the Forgotten Realms) is now being redirected to the jungle of Chult. 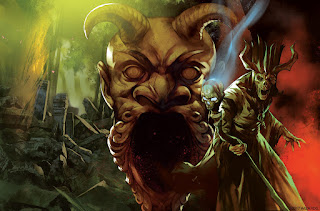 We learn a lot of new factoids about the tomb. New to me, anyway. Here's some of the basics of the adventure and the highlights:
Acererak wears a green devil mask amulet around his neck. I think that the talisman of the spheres in the DMG looks just like that. I'd imagine Acererak has some special sphere of annihilation at his disposal. Maybe a giant one, or 5 small ones or something. 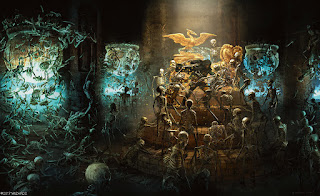 Garycon: There's a big article on Garycon and the Tomb of Horrors. It looks like they'll be rolling out some competitive D&D tournament events next year.

We get a big thing on the Tomb of Horrors riddle, and a new riddle by Maze Arcana's Ruty Rutenberg.

Then at the end is a riddle that involves the tomb of annihilation. I'm terrible at riddles. The worst! Since I spotted this right away, I don't consider it a spoiler: the first letter of each line spells out "Soulmonger."

There's an article on fantasy grounds and how stuff like that can make your life easier.

There's an interview with a DMs Guild creator named Jussi R. Foltmar Svendsen, who created The Bestiary, a book of animal and beast stats. He seems like an awesome guy. He runs a weekly game for kids. 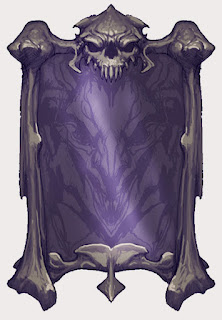 List of Lich Phylacteries: We get a list of lich phylacteries (things in which liches keep their souls). I was going to pick out the 3 I thought ere the best, but this list is ridiculously great. There's too many good ones to list! I'll just grab some of my favorites:
This is legit one of the best "lists" I've ever read. You should definitely consult this if you need a lich for you campaign.

Minis: An article on painting Nolzur's Marvelous Miniatures, a line of unpainted minis. I haven't heard much about there.

Rat Queens Adventure: Article about Kurtis Wiebe, who does the Rat Queens comic. He made an adventure called The Hangover, where the heroes black out while carousing and wake up in the forest to a very interesting scenario. That's a really fun idea!

I just took a look at it. It looks like you're meant to actually play as the Rat Queens in it.

Old Issue of Dragon: They look at Dragon Magazine #26, reprinting an article about liches. There's a comment about an article of DMing advice in that issue that doesn't hold up well. Apparently it's very adversarial. I would have liked to see someone pick it apart and discuss why and how the mindset of the DM evolved.

Free Maps: We get maps for the unless Citadel and, interestingly, ship maps from the 3rd edition Stormwrack book. The ships can be used in Storm King.

Unearthed Arcana: Subclasses: (druid) Circle of the Shepherd, (fighter) Cavalier, and (warlock) Celestial. There's a couple devil-related things:
Very good issue! It is definitely worth checking out.
Posted by Sean at 4:22 PM