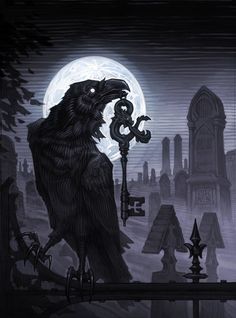 Episode 52: Can't Hurt Sunshine
This last weekend was the Stream of Annihilation. It was awesome. I wrote a billion words about it already. The whole event kicked off with Dice, Camera, Action episode 51, where the group learned that Diath and Strix are dying.

Chris is starting to work in the story of the new adventure, Tomb of Annihilation. In it, every person who had been raised from the dead are no rotting away and will be gone forever in a matter of weeks. To stop it, the heroes need to seek out an artifact known as the Soulmonger.

We pick up where we left off. Strix and Diath are dying, and Van Richten has just told Evelyn that in order to save Strix and Diath, she has to die. Only Evelyn can save them, because she carries the blessing of Saint Markovia.

The group has a suite in an underground inn in Citadel Adbar. In this suite, the group discusses what to do. Evelyn is very up for it. The other two really don't want it to happen.

Van Richten intends to cast a vistani pagan ritual. He needs components! He'll try to take care of that himself. He needs three rings of pure gold.

Paultin will need to dress up as a raven. They'll need to make a raven costume. Van Richten notes that the ritual might not end the curse, it might just stave it off.

The max hp of Diath and Strix drops by 1 hp. That's going to keep happening until they are dead.

Paultin is in the other room, hung over. He wakes up and hears Van Richten. Paultin is none too please (Van Richten killed his parents)and he casts animate object the chair Van Richten is sitting on. Paultin screws with him a lot and once he gets up to speed, he feels like Van Richten is not telling them everything.

Van Richten's off to get the ingredients for the ritual. The group goes to meet the king to report to him on what happened at Ironslag. Standing next to the throne is his main adviser, Azon Bronzefire.

The king thanks the group for saving Jasper and he asks about the other dwarves. Diath says they didn't make it.

Azon demands to know where Krak is. Diath declares that Azon is a schemer - "Krak" (the earth genie in disguise) was an agent of the Bronzefires and he was up to no good. The court of dwarves are in an uproar.

As proof, the group releases the genie from the flask. The genie admits that he is bound to the Bronzefires and that they sent him to steal the golem.

Azon is taken into custody.

The king kicks everyone out of the throne room except the heroes. The King explains that he's not really the king - he's a doppleganger (shapechanger). The original king was dying and put him on the throne so that the dwarves wouldn't panic.

This subplot is right out of Storm King's Thunder.

The doppleganger thinks someone is trying to kill him. He wants Strix to pretend to be king for three days, so he can go into hiding. That sounds incredibly amusing. Evelyn loves it, and points out that she did a great Strahd impression.

There are people from Yartar coming here soon and he thinks it's some kind of set-up or hit.
Ritual time?

Somewhere in here, Evelyn checks on the toymaker who is fixing Murderbot, the evil puppet. The toymaker goes on and on about Evelyn and how beautiful she is, and how it inspired him to create.

Evelyn is getting ready to die. This is not jokey at all, she's dead serious.

Evelyn hands out stuff:
She wrote them each a letter. She hands it to them. Anna wrote a bit about what was in these letters on the DCA subreddit right here. She clearly put a lot of time and thought into this, which is amazing because it's only been 4 days since the last game and she worked all weekend!

Evelyn gets sadder and sadder. She goes off to be alone. Paultin joins her. They talk a bit and she kisses him. Anna starts crying and the whole thing gets very emotional. Apparently most of the people who watched this live were crying, too.

We're doing this ritual. Right now! Paultin's in the raven costume. Van Richten is Evelyn is hit with radiant energy....

Suddenly, she's flying through the aether on the back of Mourning Glory. Three entities are waiting for her:
Yeah, that's right! Her GOD is there. Why is he holding a baby?

OK.. going to go on a huge tangent here. I forgot about this stuff until I looked it up.

Saint Andral is mentioned in Curse of Strahd on page 97. His bones are stolen.

"There is a stained glass window that depicts Saint Andral, the Morninglord and Saint Markovia on page 138 in Curse of Strahd."

Here's what I wrote about the time the waffle crew discovered St. Markovia's crypt in Castle Ravenloft:

"Evelyn is magically drawn to the crypt of St. Markovia. This area is on Curse of Strahd page 86, Crypt 6. Chris changes this around quite a bit from what's in the book.

I always thought it would be cool if Evelyn became a saint. Maybe that will happen somehow. If she defeats Strahd, that's worthy of sainthood, right?

In the crypt, the group sees dust that might be the remains of St. Markovia. The group thinks that if Diath snorts it, he'll be cured. He declines. Strix quietly puts some of the ashes into a potion bottle and keeps it.

The spirit of Saint Markovia appears and blesses Evelyn's weapon, Lightfall. She calls Evelyn "Lady Marthane." Lightfall is imbued with the powers of a mace of disruption:

Lightfall:
Right after this, Diath actually drank the ashes of Saint Markovia. He was turning into a ghoul-thing thanks to his dark pact. Drinking the ashes actually did turn him to normal.

Evelyn is about to greet her god and the saints. Suddenly, black tendrils snatch her. She's pulled into a green devil face! Wow... this is more Tomb of Annihilation stuff. The face looks like this: 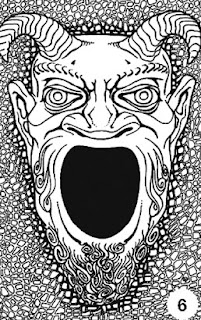 Paultin's there in the ether, in the form of a giant raven! He sees Evelyn being stolen away by the tendrils. He flies after her. He is going to need to make a check to grab her. NATURAL 20!

That is just amazing. The crew rolls a lot of natural 1's and not too many 20's. People are crying and holding their mouths.

Suddenly... Paultin is in the crumbled ruins of a citadel in a winter valley. There are torches on the outside. It is a grey, colorless place. He's in a hallway with doors on one side and windows on the other. All the way at the end of the hallway are double doors.

A voice hisses at him: "Get out!" He hears cracking twigs.

Paultin does not leave. He heads down the hallway. He's still in his bird costume.

He enters the room and finds.. a nest that takes on a living form..? A living nest? There's darkness where its face should be.

Birds come flying at him. The nest-thing presses a severed, rotted hand to his lips.

A voice fills his head. "Let it clutch the chalice." He takes the hand and the nest-thing collapses into a heap. 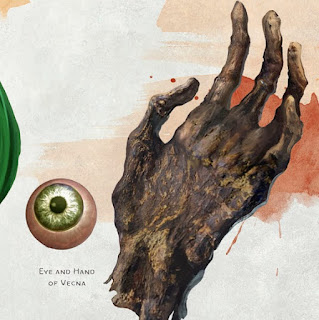 OK. Severed hand? Is this the hand of Vecna?! I think Chris is a Vecna enthusiast and I believe the Amber Temple is actually a temple of Vecna.

Back in Citadel Adbar, Van Richten has collapsed and Paultin has vanished. Chris says they can't tell if Van Richten is unconscious or dead. Evelyn vanished, too. Strix is certain Evelyn has moved on.

Back in the aether, Chris says that Evelyn was pulled away from.. the Soulmonger...! She finds herself in light.

Evelyn wakes up. Paultin is lying next to her, holding the severed hand.

They're in a toy store. She looks at her hands. They're different. She's in a toy body.. a body that looks like Evelyn.

She's the same height that she was when alive. Mecha Evelyn! That's where we stop?!?!

As they wrap up, Anna says that she actually sent the players letters in real life (twitter DMs). Next episode, we will learn more about Diath's past.

Not sure even what to say about this one. It just ramped up and up and up. It got extremely emotional, more than I've ever seen in a D&D session.

As I have said many times before, Anna is an amazing player. For most of this session, Chris could just sit back as Anna played out what Evelyn would do in this situation. She puts so much thought and effort into her character, she's just top notch all the way around. She actually sat down and wrote out letters. Not many players do stuff like that.

A very remarkable session! If you've been watching this show for a length of time, it's a pretty big deal. It showcases why D&D is so awesome and utterly unique. It is much more involving than a TV show or a movie, because you're actually "in it." When you play D&D, you're an actor and the audience.
Posted by Sean at 12:26 AM

This really was a great episode, and will be quite hard to top. I don't suspect it will happen until we reach the conclusion of Season 3 with the Soulmonger. So many great moments, it feels difficult to not talk about them all. Like Diath revealing Bronzefire's treachery, Evelyn finally getting a moment to spend with Paultin (clearly waving that death flag harder there), Gods and nightmares, and Evelyn waking up in her new form, which may very well be the birth of the warforged race in the Realms! I know Chris likes using them, just as much as he likes using the Raven Queen and Vecna (All three are important and tied together in Iomandra).
That being said, while I am certain the hand Paultin has is the Hand of Vecna (given to help deal with Acererak's plots here, seeing as he's one of the God of Secrets' wayward apprentices), and that I am certain the place Paultin was in is the Shadowfell, I'm not certain if the "crone" he met was the Raven Queen. It felt like a new interpretation of her (which I like. Gods should have many forms), but since Chris referred to the birds as crows and not ravens, I'm uncertain about "her." Even more so with the fact that in the Realms, Kelemvor is the one who holds court over the dead. Maybe that's why (if it is her) she doesn't appear the same.
And if it is the Raven Queen, how bad does that make what Acererak is doing if the Raven Queen and Vecna want to stop him? When enemies have to work together Lol

I feel very stupid now for not realizing that till now. Looks like your favorite NPC from CoS is going to play a role in Paultin's future.