Episode 53: The Double-Edged Sword
The audio on this episode was very low for me. I couldn't make out some names and other stuff. Still, a very good show!

There are a few things on this episode that are part of D&D lore. I'm going to explain them below. If you want to experience it fresh, maybe skip this review.

Last time, Evelyn died and was reborn as a life-sized puppet/construct. Additionally, Paultin was given a severed hand by a nest-person. 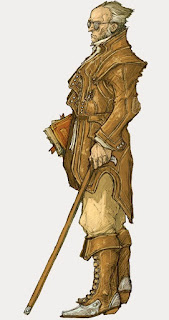 The group is separated in this episode. Strix and Diath are in the room of Citadel Adbar where the ritual took place, while Evelyn and Paultin are in the toymaker's shop.

Evelyn's soul is apparently in Master Flamebane's construct. She is not happy. She actually sort of threatens Flamebane.

Back in the ritual room, Van Richten is down. Is he dead? Nope. Van Richten is alive! They take off his goggles. He's got empty eye sockets! Smoke is billowing out of them. Jasper the dwarf picks him up and takes him to a temple. Strix and Diath are freaked out.

Diath and Strix head down a hallway, trying to figure out what to do. They realize that there are creatures lying in wait for them up ahead. Four bugbears step out of the shadows. They demand the iron flask (the magic flask currently has an earth genie trapped in it).

The heroes aren't giving up the flask so we are going to have ourselves a combat.

Jared has a new amethyst d20. He hopes it rolls well. Natural 20! Wow.

Waffles the baby owlbear has grown up a bit and wants to attack. Holly rolls for Waffles. Natural 20! This is very unwaffle-like.

Strix drops a fireball on the bugbears, using careful spell so that her allies aren't hit in the blast.

Meanwhile, Evelyn examines herself. Anna thinks she's a bit too much like a realdoll. I died laughing.

She demands answers from the toymaker. Evelyn wants Paultin to kill her so that the toymaker can reassemble Murderbot. Good gawd. Don't do that. Paultin actually leaves her and goes to get a drink. He just walks off.

Elsewhere, an invisible assailant comes at Diath and Strix. This person, a woman, is wearing some sort of gas mask. She hits Strix with a lightning bolt and Strix is down.

At one point, Diath makes a perception check. What did the amethyst die roll? Natural 20.

Then... Strix death save... natural 20! Their dice are a force of nature today.

The mysterious attacker turns invisible and flees. Strix busts out the iron flask and tells the genie to follow them. He does.

A dwarf (duergar?) approaches and asks if he's related to Ashton Woodrow. Diath says he doesn't know who that is. We eventually learn that this person is half-dwarf, half-orc.

The dwarf hands Diath a sword.. it has designs on it linked to.. Sigil! Wow. There's a word on it written in Abyssal: "Gutter." It has a keyhole in it. Hmmm.. So does one of Diath's keys work on it?

Diath takes it. The dwarf is disoriented... severed from a connection. He's upset. He wants the sword back.

The dwarf shakes it off. He says that he used to adventure with Ashton, and that the sword is meant for his descendants...

Meanwhile, Paultin goes to the bar. He's got the severed hand out. he plops it on the bar. It comes to life - it has attuned to him. It animates and moves around. It can't fly, but it can move around like a crawling claw.

Evelyn comes in and checks out the hand. It's not evil. She makes friends with it, gives it a fist bump.

Strix had told the dao to follow the bad guys. She realizes she never said for him to come back. Looks like he is free of the flask! Strix is quite perturbed about this. She seems to be rolling around on the ground, groaning.

Gutter, the magic sword, starts talking to Diath. It calls itself a "magic short sword of backstabbing." It wants Diath to use one of his keys in the sword's keyhole.

He does. A planar gate opens! What.. a creature steps through. An arcanaloth.. don't tell me this is Shemeshka.. IT IS! She's wearing the crown of razorvines!! This will be interesting. 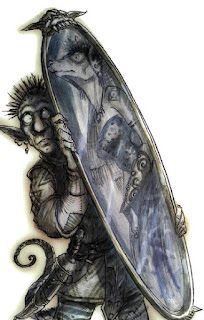 Shemeshka is a pretty major NPC from the Planescape setting. She lives in the city of Sigil, she's a shadowy information broker/slave trader and she always has secret plans in motion. She operates out of a casino called Fortune's Wheel and has these "groom-guardians" that I always found amusing. She has a weird, adversarial relationship with another of her kind named A'kin the Friendly Fiend.

There's more about her in my Guide to Sigil.

Shemeshka says she will answer three questions, and then Diath must hand over a key. Each time Diath summons her to ask questions, same deal. Once the keys run out, that's it.

What's the deal with that?

Diath gets three questions.
Diath gives her a key. She leaves through the portal.

There's a foppish dandy watching Paultin and Evelyn in the bar. Paultin comes over and demands to know what his problem is. This guy's name is Vorpus Krenner. I think.

Borgus says he's heard of the waffle crew. Their reputation precedes them.

The guy's food comes. Waffles! Evelyn realizes that she can't eat waffles. Anna says she sheds a single tear. Chris says: "No you don't." Everyone cry-laughs.

Paultin grabs a waffle and eats it. Con save! The waffles are poisoned?! Paultin makes his save.

It looks like this guy is a Harper, one of the secret band of do-gooders spread all throughout the Forgotten Realms.

Uhh... the bar is fading away. Evelyn had noticed Paultin's missing shadow - it stuck out to her more than normal for some reason. She was also sensing evil...

They're somewhere else. They're in a castle. Someone's coming. Paultin quickly turns Evelyn invisible.

Who walks through the door? It's Escher. WHAT. Did they just get sucked back into Barovia?!

With Strahd gone, did Escher take over Barovia? Does he now have the power to control the mists?

This episode is right up my alley. I really get a kick out of seeing Chris run "official" NPCs, and I love the mixing/combining of campaign settings. Right now, we're in a campaign that uses material from Curse of Strahd, Storm King's Thunder, Tomb of Annihilation, and the 2e Planescape boxed set.

Shemeshka will apparently be a recurring character, which I think is really cool. Any link to Planescape makes me happy. I guess Diath is from Sigil as well? I have absolutely no idea what the deal with his keys is.

Questions About the Keys: Sigil is called "The City of Doors" because it has portals to pretty much every plane of existence - The Abyss, Mount Celestia, Hell, Mechanus, etc. In Sigil, the key to opening these portals often isn't a physical key, it's a random item or gesture that is usually linked in some way to that realm. Activating a portal to Hell might require you to think an evil thought, and activating a portal to Mount Celestia might require a feather from an angel's wing.

So Diath has a ring of keys and Shemeshka, who lives in the city of doors, is taking them one by one. Is it possible she lied about making the sword and is after the keys? Were the keys planted on Diath to keep them away from her?

If she didn't make the sword, why is the portal linked to her?

Why is the sword called "Gutter"? Is it because it guts people, or is it a reference to a gutter in the Hive?

Could the group use the iron flask to trap Shemeshka? I think they can.

My favorite question: Could the group go through the portal that Shemeshka came out of? If the group gets trapped somewhere, like a cave-in or something, could they use it to escape to Sigil?

You bring up some interesting observations, though I don't think that Shem is lying necessarily, though definitely not giving the whole truth.

1) Chris Perkins gave a name to the hand Paultin had. I believe it was the "Hand of Hel" unless I completely misheard it somehow

2) The guy who brought the sword to Diath was explicitly stated as Half-ORC/Half-Dwarf. (I though Druegar myself as well initially, lol)

3) Chris said "descendants" but I am quite sure he meant to say "ancestor", unless there's some other shenanigans afoot. And yes the name was Dareth. On a related note the name of the Harper "Red Mage" guy if i heard correctly was Vorpus Krenner (I call him a Red Mage because Perkin's description of him made me think only that lol)

That's all I got. Thank you for doing a fantastic job keeping this blog up!

Spoonman: All I know is Shem is a big liar, so there's probably some kind of scam going on. I think the sword is very cool.
1. Ah, I couldn't hear that part. Was it "Hand of Hel" or "Hand of Hell"?
2. Got it!
3. Vorpus Krenner. OK.. I didn't hear the description. That would be pretty cool if he was a red mage.
You're welcome! People read it, I like doing it, it works out great all the way around. Thanks!

Er... you're asking if we heard a difference between one or two l's?

It's one of the two. Not sure we have a way of knowing which one yet.