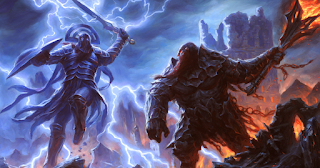 Episode 45: Fire Giant Override
It will be interesting to see how this episode matches up with the "small animal" episode last week. 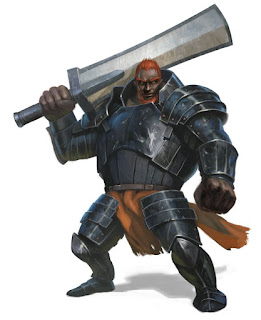 When we last saw the waffle crew, Paultin was off on his own and got knocked out by an iron golem commanded by a dao (earth genie). The rest of the group rescued a dwarf prisoner but ended up getting cornered by the fire giants.

Near the end of last episode, Strix drank a potion of frost giant strength. At the start of today’s session, she actually knocked the fire giant, Duke Zalto, over.

Elsewhere, Paultin wakes up and the dao apologizes. He points out that fire giants are trying to get into the room. The golem is blocking the door., keeping them out.

The dao snaps his fingers, and Evelyn's armor of invincibility appears on Paultin. It is eventually determined that because Paultin isn’t attuned to it, he doesn’t get the benefits of it.

Paultin creates a waffle hut (leomund's tiny hut) so that he and the golem are inside of it, and casts a thunderwave inside the golem. The golem responds by letting out poison gas that knocks Paultin out.
The Duke drops Strix and the dwarf in the same round. Strix is unconscious, no death saves. The rest of the group is invisible, although flour is thrown and pretty quickly the whole group is visible.

Diath tries to diplomacy the giants and rolls a cool 8. He eventually tells the giants that they are here just looking for their pets. The Duke thinks that's the stupidest thing he’s ever heard.

The duke thinks that the heroes are just a distraction as part of some bigger scheme. The duke puts Diath in the cage in his maul. Poor Strix gets up and then the wife drops her once more by hitting her with a cauldron. 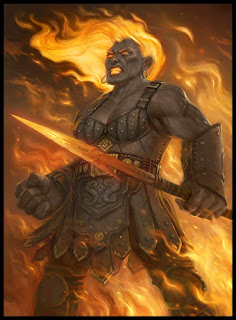 Diath starts freaking out.. he seems to really hate being imprisoned.

The genie shrinks Paultin and puts him in the golem. The genie also snaps his fingers and the armor appears on him. He is dubbed "Smalltin."

The duchess grabs Evelyn and they get into an argument. She carries Evelyn into the kitchen, where there are some ogres and smoke mephits.

Diath is brought into the golem room. He sees a massive sword (70 feet long) and a big heart. He also spots the construct that the pets collapsed. He spots double doors and he’s sure that they they lead to the outside.

The duke is looking for his hell hounds. Diath tries to pick the lock of the cage but fails. The Duke puts the maul down.

Wow.. the duchess tries to dump Evelyn into a giant stew. Evelyn goes in, and then flies out with her magic boots.

Now they need to pick the lock of the ginormous door that is way high up there. Strix is going to turn Diath into gaseous form so he can slowly gas his way up there.. Wait.. here comes Evelyn. The duchess is chasing her. Evelyn flies up to the heart, thinking she can use it as leverage to get the giants to back off.

Diath tells her to break it. Evelyn gets excited and Anna describes a very amusing slow motion scene where she flips her hair, stew goes flying, spins and hacks into the heart.. and her beloved axe, Lightfall, explodes. The group is somewhat devastated. Evelyn lets out a blood-curdling scream.

Diath sees the Duke looking through the wreckage.. there's Waffles the baby owlbear, about to be discovered by the fire giant.

Good show! I guess there were some technical problems so the tone was a bit weird, but no big deal. This does a good job of demonstrating how you can use Ironslag. I feel like I didn’t “get” the place until just now.