Adventures in Eberron - Nine Draws From the Deck of Many Things 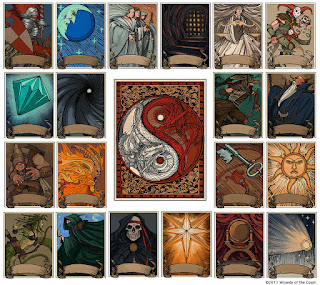 We're now 9th level in the Eberron campaign, in which I run a sorcerer. I got to pick a 5th level spell, which was extremely difficult. Ultimately, I went with cone of cold because I do too much fire damage. I feel like I might need more utility spells, but I have fly and invisibility, which covers a lot of bases.

We use an actual deck of many things. You can get one in a 4th edition boxed set called Madness at Gardmore Abbey. It comes with the deck, some pretty nice poster maps and adventure booklets. Even if you don't run the adventure, the deck and the maps make it worth buying. Some people say this adventure is the best of 4th edition, but I ran it and it kind of sucked.

Right now it's at $40 on amazon, ebay and half.com which, IMO, is too high for a deck and maps.

We had finally made it all the way through the Shadow Castle. Our fighter had died, so we brought him to get resurrected at one of the clan houses (Jarasco?).

We Met Corellon: We learned that this warforged we saved was actually Corellon, god of the elves. It's part of the overall metaplot. In the campaign we played previously (4th edition), we defeated Lolth and Orcus. Both of those entities had placed a portion of their divine spark here in Eberron so that it would be possible for them to be reborn. One of the rakshasas serves Orcus, the other serves Lolth.They're trying to revive the two demon lords.

Corellon came here to try to help oppose them, but he ended up trapped by the bad guys in the Shadow Castle.

Rakhasas: As we made our way through the city of Sharn, we were accosted. We finally ran into the rakshasas who have been up to no good throughout this campaign. They had charmed some guards, who were closing in on us.

We were on the center of a bridge high up in the city of towers. I cast fly on myself and Art/Corellon. We had a little trouble with the guards, who were very weak. One rakshasa cast fly and came after me.

On the bridge, our fighter fired off some arrows into the rakshasa. It turns out that they are vulnerable to piercing weapons used by good-aligned creatures, and he did piles and piles of damage to it.

We had researched rakshasas and I knew they were immune to spells 5th level or lower (!). So I started flying around, leading the rakshasa on a chase. Ultimately, I timed it so that when the rakshasa flew near a statue on the side of a tower, I cast shatter on it so it broke off and fell on the rakshasa. I rolled and it worked!

The rakashasa crashed onto a bridge far below. I went down to see if it was still alive, but it was gone.

When I got back to the bridge, the group was finishing up the other rakshasa. When it died, it turned into mist. We saw that it wasn't dead, it was just reforming elsewhere.

Art/Corellon was nowhere to be seen. He had said he wouldn't be around for long.

Deck of Many Things: We returned to our base and had a long discussion about what to do next. We questioned a charmed guard and didn't learn too much.

What ended up happening was that we let our succubus ally draw from the deck of many things. She had asked to do that last session.

The day after the battle with the rakshasas, we went to the cemetery (we figured that was the safest place) and we let her draw.

She took two cards. I was wondering if the DM had pre-planned the cards she'd take. He didn't! He actually let one of the players draw them. She drew:
Basically, we got a magic dagger. I think we're going to try to find her. She's a bit of a wild card, we're not sure if she's an enemy or ally.

Our wizard has a mysterious book of shadows. In the book, it says that when each of us have drawn three cards from the deck, something will happen. We debated about whether or not we should just do this now. The wizard is very hesitant. I told her I wouldn't draw from the deck if she wouldn't rubber stamp it. She did.

So.... we all drew from the deck of many things. It was terrifying.

Here's what I got:
The fighter drew:
The wizard:
That's it! That's the best draw from the deck I've ever seen. In any campaign I've been in, nobody survived 9 draws. We got really, really lucky.

The Book of Shadows gave us three riddles/quests. In order to save the world from Orcus and Lolth, we need to go to three Eberron places:
It was pretty clear that this is a task that should be undertaken after we've handled a few other more pressing matters. I think the DM didn't expect us to draw from the deck at all. We'd actually declined to do so a few sessions prior.

Not only did he roll with it, he came up with three cryptic riddles on the spot, each of which incorporated the names of the three cards we had just drawn.

We were giddy off of our draws. I immediately attuned to my staff of power and began bragging about all the cool magic items I have:
Boom! That's over two years worth of real life time spent accumulating that stuff. The nice thing is that most of them don't require attunement. 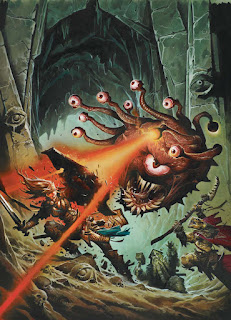 Well of Worlds: We eventually decided to take on another quest. We needed to use our well of worlds to travel through three different planes to find three towers. Once we'd done so, we'd be able to go to a 4th tower that was the true object of our quest.

In the last campaign, our heroes lived in a green tower in Fallcrest. I assume that's where we're headed. It's very interesting to cross over from Eberron to the 4th edition Nentir Vale setting, very cool.

We went to an underground safe place and opened up the well. I rolled a random plane from a list of Eberron planes the DM had.

We lowered our fighter in, and basically he was in the Eberron equivalent of the far realm. I can't remember what it was called. It's the home of creatures called the Xoriat. Apparently, they created illithids and beholders.

We pulled the fighter out and he was covered in worms. We quickly decided we were not going in there and I started folding up my well. We'd just wait d8 hours and roll again.

But as I was folding up the well, something invisible came through. We quickly threw gunk and dust at it, so we could see it. It was a beholder!

Eye Rays: I was blown away. I can't think of when I'd last fought a beholder in any campaign. 4e beholders are especially scary, because they can fire eye rays at the end of other people's turns!

I won initiative and I cast hold person from my staff of power. It failed its save! The staff gives me +2 to everything, including AC, spell attack bonuses and the save DC of my spells! So the DC from my spells is now an 18, which is insanely high. My character is much, much more powerful now. I don't usually make spellcasters so this is very fun for me.

The beholder was held and we destroyed it with lightning bolts and arrows. We killed it in about 3 rounds. It was held the whole time!

We waited eight hours and tried the well again and this time, it led to some kind of Eberron feywild. We dropped into a crystal cave behind a waterfall. Outside was a city that seemed to be in the middle of a mass battle between armies on flying mounts. That's where we stopped.

Awesome session! We did a lot of big things and made a lot of progress. I'd say this was my favorite session of them all.

The DM rolls with everything very well. He was more than happy to indulge me when I led the rakshasa on that flying chase.

Good stuff! Looks like we'll play again in May.
Posted by Sean at 2:01 PM

I don't really want to ruin your whole power-high, but BTW the staff of power grants a +2 bonus to YOUR saving throws, not the saving throw DC of your spells.

That's still incredibly powerful, but probably not as powerful as you originally thought.

Zingbob: Aha! Thanks. Yes I was more than a little excited, it completely changes my character.