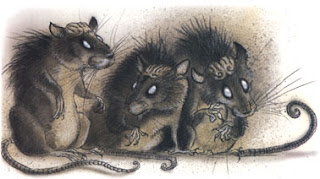 Episode 44: Animals in Heat
Holly made a puppet of her cranium rat and it attaches to her shoulder. I don't know how she does this stuff, it's really great.

Last Time, the Waffle Crew got cornered by a pair of fire giants. Their animal sidekicks fled in terror. In this session, the players play as their animals. 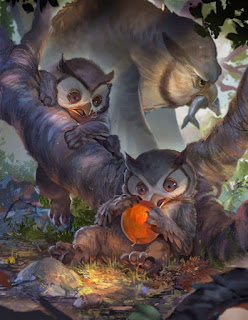 The animals can communicate as long as they are within 30 feet of Mr. Stinky, due to his telepathic powers. Stinky is always angry.

I would like to see how Chris runs a cranium rat hive. They all share a single mind. Does that mean that the entire hive in Sigil has a personality like Mr. Stinky? I think that would be pretty funny.

They're in a vent. They come to an intersection. Holly and Anna are always worried about Waffles dying. Jared trolls them by claiming that today is the day that Waffles is going to "heroically sacrifice" himself.

Juniper is plump and doesn't exercise much. She climbs on Stinky and takes a nap. They smell food. It is coming from a room nearby. Stinky and Juniper go in through a grate.

Six Goblins enter the room. The group bails out and goes back into the vents.

They're in a tunnel... there's a light a ways off. It is making squishy noises. They want no part of this.

The group flees to the kitchen where goblins are working. The group hides in an overturned bowl and try to creep across the room.

After a bit of wandering, they hear a really loud clanging noise. They decide they want to find the Waffle Crew. They end up in a vent heading toward a grate connected to a room.

In the room is Paultin, who is sleeping or unconscious. Next to him is the dao (earth genie) and the golem. Something is trying to bash the door to the room open.

Stinky doesn't like Paultin. Juniper wants to go to him, figuring Evelyn will find him. Nope.. they leave him to his fate. 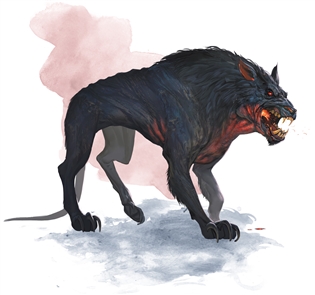 They end up in a hallway and they are spotted by a hell hound. Good gawd. Anna tells Chris to think long and hard before he kills Waffles.

Oh no.. a second hell hound. Roll initiative! The hell hounds charge down the hallway.

Stinky stays in the hall while the other two scamper into the vents. Stinky uses his mental powers to try convince them a demon is coming. They slow down and circle Stinky. They don't buy it.

He tries to flee, but one of them puts a paw on Stinky's tail. Stinky bites the paw and is able to scramble into the vent. Waffles distracts them and they all flee into the vents.

A hell hound breathes fire into the vent! Waffles rolls a natural 20 on his save! They evade the flames.

They escape the hell hounds and end up on the bucket/conveyer belt thing. It takes them through the room with the massive golem parts. The players call it a mech and consider checking it out, but they keep riding along.

They see that this bucket journey ends with orcs smashing the contents to pieces, so they bail out.

Stinky ends up on the "mech" and it doesn't go well. Stinky is pinned in the machinery inside the mech. The hell hounds are here, at the base of the mech.

Waffles climbs in and gets stuck. Juniper goes in and pushes a lever, but she is too weak to move it. She gets a piece of cable, wraps around it and hands it to waffles, who pulls.

The whole thing falls over, crushing the hell hounds. Stinky rolls bad, but lives! Chris point out that everyone in the complex hears this noise.. and that's where we stop.

I was quite leery when I heard about the premise of this episode. I felt like it would be a waste of a session. As it went, I liked it more and I think that Chris found some cool things for them to do. Ironslag is a good place to do an adventure like this. The mech, the bucket chain and the hell hounds added a lot. I can't believe I didn't think of the hell hounds as foils. It was pretty perfect.

This episode brought me back to things I saw as a kid (a parakeet literally flew into our house and we kept it, but that's another story). There are two movies that I saw when I was really young that basically fueled my interest in D&D: The Dark Crystal and The Secret of Nimh. Nimh in particular made a huge impact on me. Years later, as a pre-adolescent DM, I ripped off everything from that movie a few times over. I always tried to capture the coolness of Nicodemus and the interior of the thorn bush, but I never got too close.

Good show! Different, but worth seeing, I think.
Posted by Sean at 10:02 PM

Yeah, I was wondering whether this session would further the main campaign at all, and crashing the mech definitely satisfied that need. The distraction may well save the Waffle Crew from Zalto when he hears it.

I loved the hell hounds as villains. The fact that Stinky could talk to them was great; they basically reminded me of villains from those old animated all-animal movies. Wish I could think of some good examples but it's been a while.

Anonymous: It reminded me of the same thing. In the beginning I felt like this way too cutesy for me, but once they got going it was fine. It's a bit intense because they're so weak and the danger is so overwhelming. Nobody wants to see bad things happen to the baby owlbear!