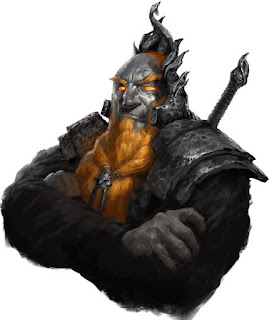 Episode 43: Meltdown
The group is in a tough spot this week. There are fire giants everywhere and the heroes are scattered in a bunch of rooms.

Chris starts with a long recap. He points out that that the salamander is still alive after it exploded out of the hellhound’s body. Strix is in gaseous form. Diath is sneaking around. There’s 4 ogres on the gantry who are just standing there, confused.

I get confused by this kind of thing, so I decided to use the maps to show where everyone is: 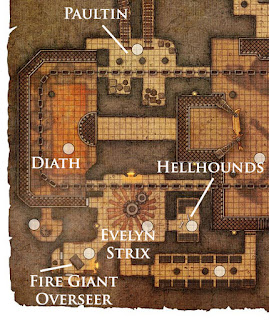 Paultin is cut off from the foundry by a wall of stone. It is dark. He can hear something big coming up behind him. A big stony hand settles on his shoulder. A voice says: “Abandon your friends and come with me. I will help you, and you will help me.” He's a dao (an earth genie). Paultin agrees to go with him.

Evelyn is flying by a fire giant overseer. She activates her armor of invulnerability, so she takes no damage at all. As she activates it, she calls out: "You can't hurt sunshine!" which appalls the other players.

Evelyn flies away. The overseer attacks Strix. She's in gaseous form but she can be hit. Evelyn summons her horse, Mourning Glory, and orders her to distract the giants. The horse almost immediately destroyed and it is de-summoned.

Strix sees a new giant enter the area, wielding a maul. This is Duke Zalto, the fire giant who runs this whole place. On the end of his maul is a cage with a dwarf in it. Strix flies over to Evelyn, shuts off her gaseous form and is hanging on Evelyn, who is still flying.

Both of them fall to the ground. Diath is right there near them. He grabs the dust of disappearance off of Strix’s belt and uses it. They all turn invisible, hold hands and try to creep about.

Duke Zalto tells the heroes to surrender or he'll kill the dwarf in the cage. Diath notices that one exit is blocked with a wall of stone.

Evelyn is sent to go open the giant-sized doors. Strix and Diath try to sneak down the stairs to the lower level, but fire giants are coming up. One of the giants brushes into Strix and stops.

Strix lets go of Diath's hand. She wants him to keep going. Diath throws a gem to try to get the giants looking in another direction. It works.

Evelyn flies down to the door on the lower level. The giant tries to dump the dwarf into the molten lava. The poor dwarf is holding onto the cage. Evelyn flies up to him, still invisible, and grabs on to him. 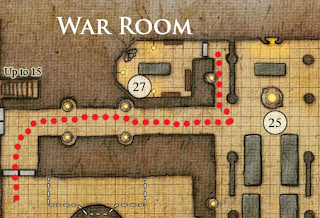 Meanwhile, the dao and Paultin come to a huge room and see massive parts that are meant for a gigantic golem. They pass through the big room, go down to a lower level, and avoid some goblins while sneaking into a war room (page 183).

In the room is an inert iron golem with a rune-covered iron ingot embedded on its forehead. The dao wants to steal it. He knows the command word but doesn't want to activate it, because the golem follows the orders of fire giants. He wants Paultin to use his magic to handle this.

Paultin isn't sure what to do. Eventually, they look inside it. In it is a hovering magical flame - this is the spirit of fire that animates it.

Paultin can't figure out how to disable it. He sees a sigil on the side of the armature. Paultin thinks this golem was made by the Bronzefire clan of dwarves. He points it out to the dao, who says he wishes Paultin hadn't noticed that.

The dao grabs his hand more tightly and Paultin lets out a thunderwave. Good idea! The dao is hit and lets go of him. Paultin runs to the giant-sized door. He needs to make a strength check to open it. He rolls... a natural one. Oh man.

The dao orders the golem to knock Paultin out. It hits him for 25 points on the first hit and a critical on the second! 44 points of damage and Paultin is down.

Back in the other area, Duke Zalto tries to shake the dwarf off of his maul and into the molten lava. The dwarf falls and Evelyn slingshots him so he lands on the floor. He takes a bunch of damage, but he is still alive.

Meanwhile, Diath and Strix, still invisible, go down the stairs and start racing across the foundry. They meet Evelyn at the giant-sized double doors. Diath asks Strix to drink the potion of frost giant strength, so that she and Evelyn can push the door open.

Duke Zalto jumps into the molten pool, sending globs of lava onto the floor near the group. They frantically push the doors open and run through. The dwarf is making a run to the door.

He gets in. Duke Zalto tries to get to the door but the group shuts it. Duke Zalto yells: "Fuck you!"

The group is still invisible, but the dwarf is not. They grab the dwarf and try to hide next to the door so that Duke Zalto just walks right by and hopefully doesn't see him.

Duke Zalto comes in, shuts the giant double doors, puts his maul down and sees the dwarf. The group is in a room with three big cisterns full of water. This room connects to another. From that other room comes another giant, a female wearing a gown made of black dragon hide.

She says "Zalto, is that you?" She is holding a giant iron cauldron. This is Zalto’s wife, Brimskarda.

Strix uses her frost giant strength to push the maul out of the way so they can go back through the door.

Evelyn suddenly realizes that her harness is empty. Waffles the baby owlbear isn't there. Neither is Mr. Stinky and Juniper, the pet mice. This must have just happened in the past ten seconds. The animals were spooked.

Evelyn takes out some food and makes a noise to call them to her. Zalto hears it. That’s where we stop.

Good show! The players definitely felt stressed, and they reacted in a way that I really haven't seen before. I would say that Jared and Holly handled it especially well.

Next episode, Paultin can't make it. The group is going to play the animals, who fled into the vents. It will go like this:
I noticed that they are doing shows every single week, which is pretty awesome. During Curse of Strahd, there were a lot of missed weeks, which I thought hurt the campaign a bit. This whole season has been very good.

I will be bummed when these characters die/retire. Hopefully that is a long way away. I can't imagine these characters at 16th level. Strix in particular will be so powerful, I can't picture what the game would be like. What would they play through? Would Chris make adventures up?
Posted by Sean at 2:38 PM