We played the second chapter of The Great Modron March converted to 5th edition D&D last night. It was better than the first. We haven't hit our stride yet, but there's a bit of a learning curve when it comes to establishing the feel of Planescape. There's a lot of lore to dump on the players and it is tricky to manage.
I wanted to implement a rule I read in Monte Cook's Planewalker's Handbook. Instead of 5e's "Inspiration" rule, we're going to use belief points.

When your character adheres to their beliefs, they get belief points. You get two points if you adhere to your beliefs to your own detriment. You get three points if you put yourself in great peril.

You can spend belief points.
The Party 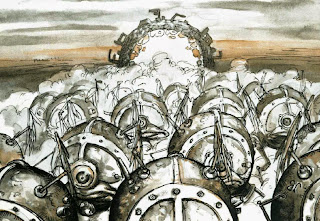 We picked up right where we left off. The modron march had begun in the gate town of Automata. The people of Automata are incredibly particular about rules and order, and had a series of escalating freakouts:
The adventurers fled the scene, taking the portal back to Sigil.

This adventure has big gaps of time between the different scenarios. From what I understand, the march unfolds over the course of about a year. There's supposed to be a month or two before the next scenario happens.

One of the things I love the most about 5th edition is the concept of "downtime", a system that allows the heroes to handle tasks between adventures. Stuff like running a business, carousing, etc.

I decided to cook up a low-threat/no-threat mini-adventure to allow them to play out how they spent their time between scenarios.

The adventurers worked for a Dustman. Their job was to find metal for him to use to build a cadaver collector. The Dustmen pick up the dead bodies of Sigil and bring them to their mortuary. Many Dustmen catch diseases from handling the corpses. By building a golem that collects dead bodies, the Dustman could send it out and do his work for him.

For 2 months, the heroes hunted scrap metal dumped by the dabuses. They came upon a githzerai woman who was new to Sigil named Alamandra. I used her to dump githzerai lore on them from my recently-completed article on githzerai. I went a little overboard, as it was all fresh in my brain. They didn't know what to make of her.

I was able to convey that Planescape is partly about philosophy and exploring different points of view.

After two months, the collector was nearly assembled. The dustman needed a magical ingredient - water from the silver sea of Celestia bathed in by an archon. 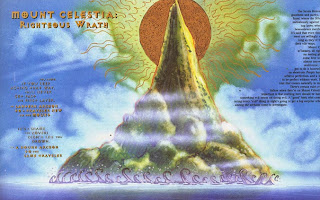 Our heroes used a portal to go to Celestia, and were immediately met by archons who needed the help of the heroes. The modrons were marching toward a town called Heart's Faith. The archons were forbidden to interfere due to an ancient pact with the modrons. Because the march was happening over a century early, the people of Heart's Faith were doomed if someone couldn't help them.

This is a tricky part in the adventure. The adventurers are supposed to get to Heart's Faith ahead of the modrons, but not by much. The whole scenario depends on the fact that the people of the town don't have time to evacuate. But if the heroes have a way to fly there (mine don't), then it seems like that could be a problem. How long does it take to evacuate a town? I honestly don't know.

Another issue is that this scenario culminates with the modrons marching right through an orphanage. You'd think that would be the first place evacuated, right? That was the very first place the adventurers wanted to deal with as soon as the Heart's Faith section began. The adventure has it where there's a protective force dome over the place, but why not just get the orphans out and to safety?

It is an awesome mini-adventure, but you need to think ahead of time and be ready. I would say, in retrospect, the best thing to do is to cut the starting distance between the modrons and Heart's Faith. In the adventure, the modrons need 10 hours to get to Heart's Faith. I'd cut it to... 2 hours? 3?

The heroes arrived at Heart's Faith and found out the ruler was away, and in his place was an aasimar named Cauldronborn. He's a laid back fellow. It is really fun to run angel-type NPCs, people who are used to living in Paradise and enjoying life. I ran him like he'd almost forgotten what it was like to have something go wrong.

Cauldronborn freaked out. Heart's Faith was on alert. After consulting plans, the heroes saw that buildings had been erected that were going to be right in the path of the modrons.

The modrons came marching through. The heroes tried to debate the modrons, and quickly realized that the modrons could only sense their immediate superiors and inferiors. This is information I gleaned from their Planescape monstrous compendium entry and I liked it. I knew it might get tricky or confusing, but it's so unique and ripe with possibility that I wanted to include it.

So basically, a tridrone orders around duodrones and obeys duodrones. It can't perceive monodrones or pentadrones in any way. Almost no modrons are even aware of the existence of their god, Primus.

We did a few encounters, including one where an old sage tried to protect a tavern by lying to the modrons about a law that prohibited modrons from marching through it. The modrons informed him that the penalty for lying about a law is death. The heroes rescued the old fellow. 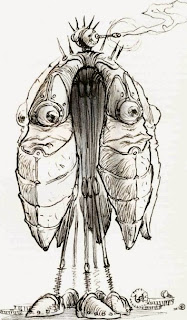 20 guards of Heart's Faith stood in front of a temple of Mitra. The modrons marched toward it, but the guards refused to budge. The modrons ordered them to move aside.

This is where Theran had an idea. He had seen that the march was led by 5 pentradrones. He theorized that if all 5 pentadrones were killed, then the modrons would have no one to give them orders, and they'd just stand there. I should note that there's a ton of higher-ranking modrons in the march, but these 5 pentadrones were up in front.

I liked the idea. I know that it is possible the duodrones would simply take command, but in my head I thought at the very least, the march would be stalled until higher-ranking modrons in the back could make their way to the front.

Theran had archons fly around the city, and tried to coordinate a synchronized strike.

The heroes decided to attack the pentadrone with the aid of the guards at Mitra's temple. They knew they'd have to kill the pentadrone right away on the very first round, otherwise all of the modrons would attack on their turn and everyone would be slaughtered.

Bidam sliced into the pentadrone. Theran missed with a chromatic orb. Two guards rolled natural 20's, scoring critical hits on the pentadrone and dropped it! Once slain, it became ash and it's weapons clattered to the ground. Back in Mechanus, a new pentadrone was born - a duodrone was immediately promoted. 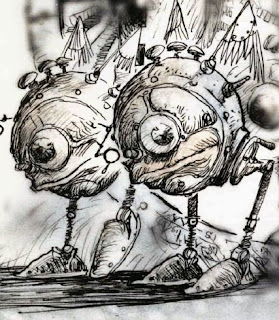 The rest of the modrons were startled. Throughout the city, the other pentadrones were killed in a similar fashion. While the modrons stood there, blinking, awaiting the arrival of new superiors, the heroes and citizens fled Heart's Faith.

The modrons eventually resumed their march, trampling to the docks, building a bridge and marching to the portal hovering out in the ocean to their next planar destination.

I think I will have the modrons establish a protocol as a result of this incident - should all the pentadrones be killed, the duodrones take over. Otherwise, this might be the group's solution to all modron march problems.

It was a good session and this is a great adventure. Next week's is especially interesting, as bad guys snatch modrons, take them apart, and try grafting modron limbs onto people's bodies to create super-soldiers!

Continue on to Chapter 3, where Theran has to battle people who are trying to graft modron parts to their bodies!
Posted by Sean at 6:35 PM