Princes of the Apocalypse - The Wicker Giant 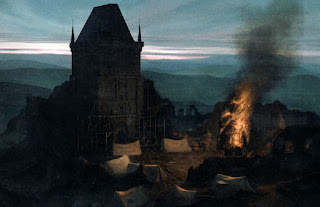 At last, we've gotten into the actual temple of elemental evil in our weekly Dungeons & Dragons game in the store.

I report these games through the Wizards of the Coast DCI program, so I started using sign-in sheets. We have 5 full tables going each week. I've begun to try to learn more about the other groups and what they are up to.

Tonight, the group known as the "Semi-Aquatic Weasels" killed a roc and just finished some kind of hybrid spelljammer adventure. Another group broke into song in the store. The group known as "Butts" is still going through Hoard chapter 4. They promised to soon tell me the story of the severed head known as "Jamba the Great". 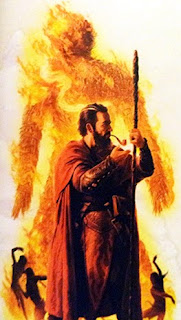 Results from the monthly D&D survey are in. Honestly, I didn't even realize Wizards of the Coast were doing monthly surveys! I should probably find it and make sure I fill one out every month.

Apparently respondents are saying they like the sandbox type of adventures, which might mean that future adventures will be structured similarly to Princes of the Apocalypse.

As I've said before, I prefer a linear adventure like the Paizo Pathfinder adventure paths are structured. If the majority of people like sandboxes, I guess I'll live. But I really hope they organize the sandbox differently in future adventures. In my opinion, the Princes of the Apocalypse book is very difficult to manage. They don't even put page numbers for monster stats! The book just tells you "you'll find their stats in chapter 7".

The Party
The drow rogue couldn't make it this week. I have been assured he will return next week. 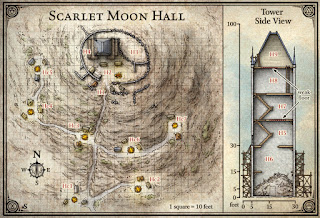 Last time, the adventurers had begun investigating the hazy hill which was the location of Scarlet Moon Hall - secret outpost of the fire cult. At the top of the hill was a damaged tower and a giant wicker man on fire.

The heroes went to the top of the hill and walked into what is an epic "poster map" type of fight, without a poster map. Once the heroes step foot up there, the bad guys attack. There's four guardians with armor classes of 17, two spell casting fire cultists (they can cast fireball!) and there's even two hellhounds.

When the fight begins, one priest uses an action to chant at the wicker man. Once this is done three times, the wicker man comes to life. When that happens.. a fire elemental joins the fray.

I was worried this would be way, way too hard. I prepared to have the four druids that the heroes met at the base of the hill come running, each armed with cure wounds and healing word.

But it turns out that the heroes did just fine on their own thanks to the healing of the cleric, bard and paladin, but most of all thanks to Lucky - the rogue played by the nine year old. 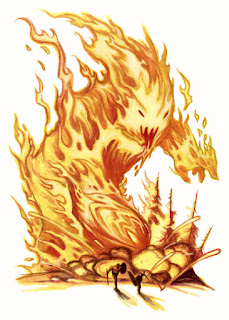 A whole pile of stuff happened in this fight, which took one hour of real-life time:
The heroes took tons of damage and were in big trouble when the fire elemental was plopped on the map. I'd been using dungeon tiles, and one tile had a pool of water. Lucky began filling her owlbear ragdoll/bag of holding with the water. In the fire elemental's stat block, it explains that 1 gallon of water does one point of damage to it. She didn't know this, she was just thinking creatively like she always does.

Now, keep in mind... you can poke a lot of holes into this idea. I'd established that the inside of the bag was a forest demiplane. I clarified that the interior is technically a "bag zone", so that the PCs gear can only take up 64 cubic feet of space in an invisible field/container underneath the bag opening.

I just looked it up. There are 7.48 gallons in a cubic foot. So that means if you fill it, that's over 450 gallons, or 450 points of damage to a fire elemental!

Secondly, how long would it take to fill 64 cubic feet? A round is 6 seconds. How much water could you put in the bag if you submerge it in the pool in a round? I had no idea. Apparently the bag of holding's opening is 2 feet at the mouth.

The bottom line for me was that this kid's idea was awesome, so it happened. She handed that bag to Squirrel Man, who used his red clay symbiote armor to create glider wings. He soared over the fire elemental, and unleashed a torrent of water which did 120 points of damage (I just sort of guesstimated with them how many gallons by visualizing jugs of poland spring water and how much space that takes up).

The fire elemental was destroyed. The bad guys lost. The players all applauded Lucky.

She even found a magic trinket. It was a clockwork harpy that, when wound up, would sing a magic song that would allow Lucky to communicate with someone on her "friends" list (remember, she has made ten friends in our weekly "dungeons and friends" encounters). 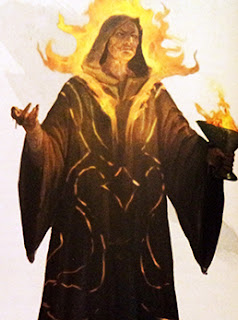 The heroes could have explored the tower, but I sort of slyly encouraged them to skip it. The druids could handle it, right? Because I can't properly express to you how much I wanted to end all of this Haunted Keep/Cult Outpost stuff.

Returning to Red Larch, all sorts of goofy stuff happened.
He led the adventurers there. Then, as thunder rumbled in the distance, Proudlinicus told them something of great importance: "Both vast treasure and certain death await, so you must gain the one while cheating the other."

That is a quote from Gary Gygax's humongous pile of flavor text in the original Temple of Elemental Evil. I may recite this quote often to my group in this campaign, until they remember it by heart.

I was going to run the ankheg encounter ("Tremors", page 44) on the way to the Sighing Valley, but we had precious little time so I skipped it.

The crevasse was guarded by three hurricanes. Our heroes utterly decimated these dudes.

Then they came upon a chasm with stairs that headed down into darkness. They followed the stairs for miles, until they came to landing. Before them was an ancient underground dwarven city!

The adventurers saw an archway with a door in it. The door swiveled - it had a central pivot. They could hear cries of pain and sorrow coming from beyond it. The heroes were very unnerved and very wary.

In fact, they were so worried that they decided to take a long rest at the front door to the whole dungeon. Normally I'd have had them be attacked by cultists right there at the edge of the chasm, but we were pressed for time. Also, I liked the idea of the bad guys beyond the door harassing them in their own weird way.

The bad guys are kenku, bird men who can mimic voices. They were mimicking the cries of air cult prisoners.

The heroes got their rest and went through the doors. They came upon a long hallway that zigged and zagged. There were many, many arrow slits in the walls, all of which had shutters that were closed.

The party was thoroughly freaked out. They made a mad dash through the hallway.  The arrow slit shutters opened and 4 kenku opened fire on our heroes.

That's where we had to stop. We were out of time!

It was a very awesome session, better than last week and the best of the campaign so far.
Posted by Sean at 7:43 PM

I can't wait to run Scarlet Moon Hall. It sounds just like Burning Man to me, what with all the separate camps encircling the Man. I plan to run it that way, playing up the misguided, good guy druids reveling and dancing naked. Some of them will be Uthgart barbarian youth who are trying to rebel and leave their tribe, and "really digging" this new tribe of total strangers who love to party (foreshadowed by the fire witch scenario where the PCs meet some of their parents). They will offer the PCs Goodberrys from their private stash. The bad guys may try to slip them a Mickey so that they are hallucinating during the final battle (think Batman Begins).

Chris Chambless: That is hilarious... sounds like an awesome idea! I would definitely use your idea if I ran this in a home game.

Ricardo Giro: It is hard, almost impossible, to not end up doing an Arnold Swartzenegger voice for Minsc. Thanks!

The escapades of Lucky and Squirrel Man have had me chuckling away at my desk on my first day back at work.
The idea of the bag of holding and the puddle is just all levels of awesome!!