Dungeons and Dragons - A Guide to the Displacer Beast 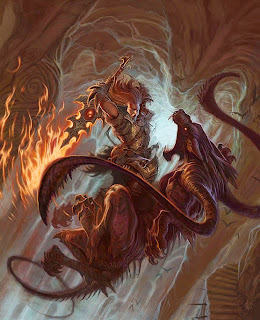 The displacer beast is an iconic Dungeons & Dragons monster that sometimes seems like it is forgotten. I don't think I've ever seen an adventure where the displacer beast is in a major encounter. That strikes me as something of a travesty. While they are often included in a scenario, it is usually as a fight along the journey rather than the feature of a set-piece encounter.

I am going to run down the displacer beast lore from each edition to try to give a clear picture of all the relevant information available to us. I will also do my best to dig up displacer beast appearances in other official D&D publications.

In addition I will detail the cloak of displacement, made from the hide of a displacer beast, and we'll look at the hatred that exists between blink dogs and displacer beasts. How that story has evolved is really cool.

The point of this is to give you a good idea on how to run a displacer beast in your game. This guide should give you a nice outline and references to draw from. 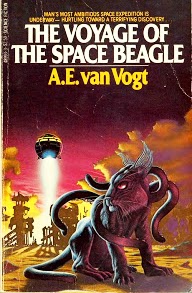 Displacer Beasts are based on the Coeurl, a monster featured in novels by A.E. van Vogt. I don't completely understand what it did - the Coeurl feeds on people's "id." Not Freud's "Id", but organic phosphorus. The Coeurl can also manipulate "electric vibrations". Basically, it befriended crew of a spaceship and then started killing them. 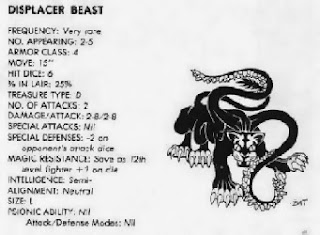 The displacer beast is a "vaguely puma-like creature" with tentacles that are "dead black". The "molecular vibrations of the displacer beast are such that it always appears to be three feet [from] its actual position." Because of this they get a bonus to AC and saves.

I guess they hate each other because they are dogs and cats? If you check out the blink dog entry, you see that blink dogs can teleport at will, usually appearing behind an opponent.

"There is a great enmity between blink dogs and displacer beasts and the two creatures will always attack each other". 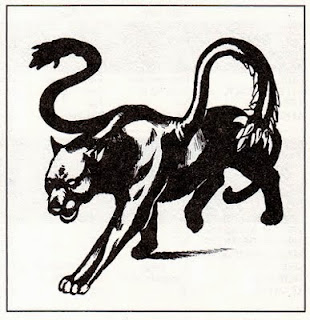 This article is written as if it came from the notes of a mage named Jen-Ahb who was later mauled to death by a displacer beast in the "University of Sarkawan". Things we learn:
The article explains why displacer beasts and blink dogs hate each other. "The very actions of displacement and blinking seem to interfere with the nervous and mental systems of the opposing creatures." They can detect each other automatically because they sense the displacement or blinking up to 150 feet away.

There's even a pile of fun notes at the end, including:
What a great article. It flowed well and was full of information.

Vault of the Drow 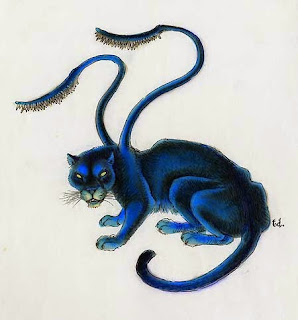 The Monstrous Compendium entry includes piles of stuff from the ecology article. "Their eyes glow bright green, even after death". They hate all life, but never fight among themselves.

"The eyes of a displacer beast are a highly prized, if uncommon, good luck charm among thieves..." 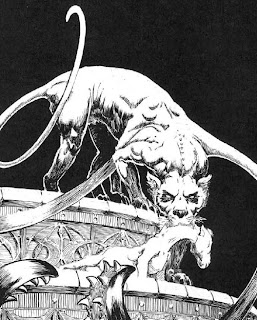 This adventure is by Willie Walsh, a guy who wrote a ton of whimsical adventures for the magazine in around 1991. This adventure is about a wizard's tower in a city. The wizard, Asflag, was up to all sorts of experimental shenanigans and he kept all sorts of weird stuff in his tower. Asflag tried to summon a creature from another plane but ended up being carried away by the monster. All of the weird items and creatures that Asflag had collected now have run of the tower.

Asflag's displacer beasts are heading into the city at night hunting people and animals, and dragging their kills back to the tower to eat. People in the city are afraid to walk the streets at night. Obviously our heroes need to take care of this.

There's a nice review of this adventure here. 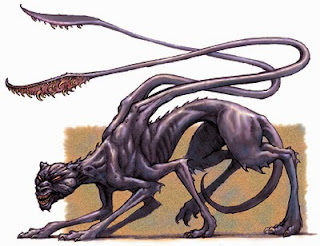 They are described as skinny - "...nothing but muscle and bone." It is said that they eat small game and, get this, they can speak common!

There's a new type of displacer beast - a pack lord. It's a mutant offspring that can grow up to 10 feet high and 20 feet long! Crazy.

Dungeon Magazine #119 - Wrath of the Abyss

This is the final part of a trilogy of drow-themed adventures. It's a complicated story involving the corruption of a city. The adventure actually includes Belgos and Silussa, famous villains from Gary Gygax's Vault of the Drow.

In this, the drow have trained displacer beasts that fight alongside them..

On the cover is Shahng, a female drow who has a "unique fighting style". She drinks a potion of haste and does a dervish dance, slicing into groups of heroes. 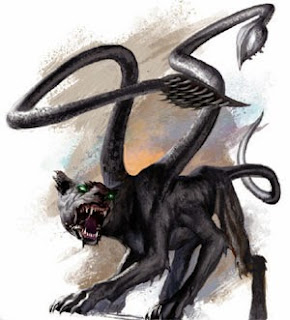 Displacer beasts are now natives of the Feywild. They also "...reside in the tangled forests and dark caverns of the natural world."

Displacement still causes attackers to miss 50% of the time. This effect stops and starts when it is hit and when it moves. This is one of the very few monsters in 4e that have threatening reach (seriously.. I can only think of about 3 creatures that had it).

We get very little lore. Here it is: "Displacer beasts can be trained as attack beasts or guard animals, but they're prone to turning against their trainers."

Monster Vault gives us a bit more info. Displacer beasts have lairs in foliage or up in trees. They take down the weakest targets first. Pack lords are as smart as ordinary people (!).

It is also stated that they are kept as status symbols by "callow young eladrin nobles."

The updated Monster Vault displacer beast handles displacement differently. Now, if a PC rolled an odd number on their attack roll, it misses. An even one hits it. The beast loses this trait until the start of its next turn.

This is a big boxed-set adventure that deals with the deck of many things. The heroes explore the abbey that has been ravaged by the deck and is over-run by monsters.

In one section, the adventurers need to rescue an eladrin's sister. She's being attacked by some stirges and displacer beasts. There's some good flavor text:

"A pale, slender figure with long silver hair flees through the dark grove, her desperate footfalls making hardly a whisper. Behind her and to either side, two feline monsters pursue her in eerie silence toward a ruined bell tower. Their black, six-legged forms are hard to focus on clearly.

Spiny tentacles whip forward from the back of one of the beasts and lash the fleeing figure, who drops with an agonized shriek. A rustling at the top of the tower signals a nest of stirges, awakened to the scent of blood. On the ground, the tentacled beasts move in for the kill."

There's even flavor for if the heroes fail to save her: "The corpse of the young eladrin lies still and bone-pale among the roots and climbers of the grove. A star-shaped ring on her finger flares once and then falls dull as plain steel, as though a bright spirit had departed." 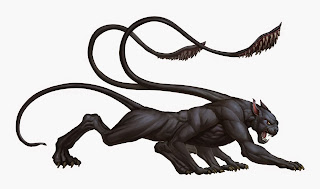 I am interested to see what we have here in the 5e monster manual.

They can't speak common. Their feywild origin has been expanded. Long ago, they were captured and trained by the Unseelie Court, and are used to hunt unicorns..! And pegasi..!! Wow. But the displacer beasts escaped their masters.

The fey hunters tried to track them down with blink dog companions at their side. Wow... awesome. Displacer beasts hunt for food and for sport. They'll toy with their prey.

Their displacement is now tied to the disadvantage mechanic. You have disadvantage until you hit them, then the effect is disrupted until the end of their next turn.

Last but not least, let's check out the cloak.. 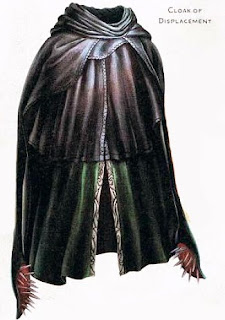 In 5th edition, when you wear this cloak it gives you the displacement effect. The displacement works just like it does on a displacer beast. People have disadvantage to hit you! Once hit, it's disrupted until the end of your next turn.

I really like that they made art of the cloak, and went out of their way to show that it is made of the hide of a displacer beast.

I wonder if anyone has a blink dog vest that lets them teleport? I think someone needs to make an adventure based on the conflict between displacer beasts and blink dogs.

That was a great read. I'm glad to see I actually used a displacer beast efficiently when I started DMing... second session I ever mastered I think.. it had one of those cute razor octo cats and it was amazing. I did one thing wrong, for some reason I thought they could open portals and teleport, so the beast dragged a PC into a dimensional pocket. Silly me! :)

Ricardo Giro: Giving them a pocket dimension is an awesome idea. It could be a lair in the astral plane, or something. Thanks!

Nice write up! I am using them as a random encounter in a 5e hex crawl. I like for each and every encounter to have some flavor and your article gives me some good ideas.
Thanks!

Ntharotep: Thank you! That sounds like a great idea... heroes getting stalked by displacer beasts seems like it could be really awesome.

I got some amazing ideas from this. Thanks!

I got some amazing ideas from this. Thanks!

Really well written ... thanks for this