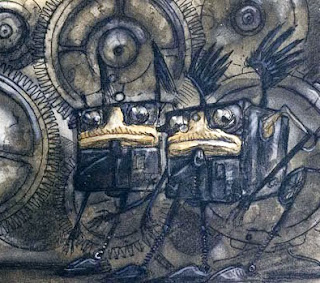 We went through the third chapter of The Great Modron March tonight. I had to make a tough call. Jessie couldn't make it, which means I'd be running this for one character. I decided to go ahead and do it. Growing up, one of the best campaigns I ever ran was a solo Al Qadim game. We'd have players jump in sometimes, but most of the time it was just a single rogue.

One DM and one player is a great opportunity to let your hair down and really dig in to find out more about a character.

We left off last time in Heart's Faith, a town in the lawful good plane of Celestia. The heroes had helped stall the modron march so that the people could get out of the way.

Theran slept. The mayor, a lamassu named Lebes, returned to Heart's Faith and rewarded the heroes for their efforts. He gave them some magic items that I'd pulled from the Planewalker's Handbook:

The Next Leg of the March 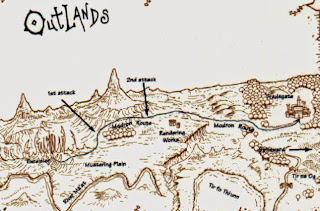 Word came through that a paladin in Excelsior was looking for help. He wanted to protect the modrons from an evil band of knights called the Tacharim. The Tacharim were snatching modrons and doing who-knows-what with them.

Theran decided to go and help. He went through the portal and met Sir Vaimish, the paladin leader. The paladin's plan was to place guards along the length of the modrons to try to stop the Tacharim raids.

Theran was paired up with an NPC rogue named Xaldra Miloni. She's an NPC that plays into a future chapter. I decided to use an awesome recent piece of Tony DiTerlizzi art to represent her: 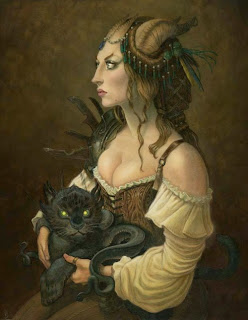 Xaldra has a displacer beast cub - a runt that will never grow fully. The beast is afraid of everyone and everything. She keeps her pet in a satchel bag. Xaldra would travel with Theran, as every solo adventurer deserves an NPC helper.

Theran saw that modron march had attracted attention from the people of the Outlands. A lot of people (grateful dead-types) were following the march, getting drunk and partying. Or, as it says in the book: "Some see it as a pilgrimage to learn a great truth, and some see it as a big moving party."

I had cooked up some march followers for our hero to interact with. I used this as a way to introduce a few more factions.

Xaositects - Crazy people who believe in chaos. They try to make the modrons go rogue. These two were near Theran's section of the march:
Free League - This faction is of people who don't believe in any of the factions and are very wary of them. They watch each others backs, and actually have the power to resist charm magic to a degree.
There was also a bariaur merchant named Giscorl, who pulled a wheeled stall behind him. He sold food, blankets and alcohol to the march followers.

I cooked up a couple of incidents for Theran to deal with, so we could learn about Theran's beliefs and award him some belief points.
Theran ended up talking with Stewart, trading notes on what the other knew about modrons. Theran learned that when a modron is killed, it is immediately reborn in Mechanus as a monodrone. This causes other random modrons to be promoted. 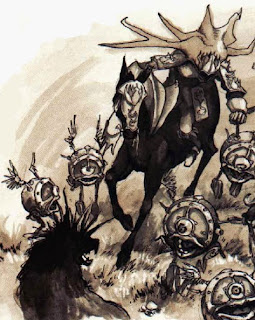 That night, the Tacharim attacked. They rode horses and were accompanied by three hounds made partly of shadow. Theran killed one of the hounds, but the Tacharim were able to snatch three modrons and rode off with them.

The following day, 20 Tacharim stole a bunch of modrons and threw them in a cart. Sir Vaimish asked Theran and Xaldra to follow them. Vaimish noted to them that his sister, Greir, had infiltrated the Tacharim, so they should keep their eyes peeled. 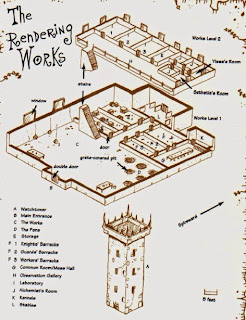 The heroes came to the Tacharim's place. There was a watchtower, some shacks and a main building. Under cover of night, the heroes crept up the watchtower, killed the guard up there and took his tabard. The tabard bore the symbol of the Tacharim, a purple flower.

Then they crept up to a window in the main building. Inside, they saw a horrid scene. Modrons were hanging from chains as workers tore the metal parts from their bodies. They also spotted some pits with grates over them - likely prisoner holding areas.

The heroes took count of the bad guys in the room - 10 workers and 3 guards. Theran told Xaldra he wanted to blow this entire place up (which is funny because there is a way to do just that in this adventure).

The pair decided to wait near the weird shacks to see if anyone else came out of the building. They needed another Tacharim uniform. Eventually, a knight came out with a sack - he was coming to feed the hounds that were in the shack! The heroes jumped the knight and cut him down. They threw the food to the hounds to shut them up.

The heroes talked a bit and ended up deciding to go on the attack. Xaldra knocked on the front door and Theran fired a spell through the side window. There was a brief battle. The 10 workers in the room were non-combatants. They turned to run by Xaldra trained her crossbow on them. Theran quickly looked into the pits - he saw a bunch of modrons and a beautiful woman - it was Greir, Vaimish's sister! She'd been found out and thrown in a prison pit.

Theran freed them all. Greir quickly told Theran hat the Tacharim had captured the modrons in order to tear off their mechanical parts, to try to graft them onto their own bodies! Because modrons vanish when killed, they had to be kept alive, even after their parts had been torn off. Theran was sickened.

The freed modrons suddenly talked to each other in modron-speak (which, I like to say, sounds like a dial-up modem connecting to the internet). The modrons transformed, combining into one giant modron (this is a concept I took from a 4e article). The ultra-modron attacked the 10 workers, stomping around and creating quite a clamor.

Theran raced down a hall and saw some doors with warnings about flammable contents. There are, in fact, three rooms right next to each other in this place that contained explosive alchemy ingredients.

Theran and his allies quickly set up a barrel as bad guys poured down the steps of the second floor. Theran and the rogues ran  to the front door. He cast a fire bolt at the barrel, igniting it and causing a chain reaction of massive explosions. He and the rogues ran and outraced the massive fireball that resulted.

They watched as the place burned, hoping that perhaps some loot had survived. But there was something moving. Greir remembered that one of the Tacharim, a priest of Set, had a mercenary side-kick: a fire grue! 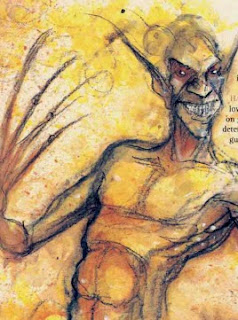 The fire grue stepped out of the inferno unscathed. He trained a magic flaming crossbow at them. He ranted and raved about how much he loved this job, and that he was going to make them pay! Theran hit him with an ice bolt, that staggered and enraged the grue. He shot Theran with a fiery bolt and then teleported into the blazing inferno.

The grue was standing in a fire to melt the ice. He screamed threats at the heroes.

Theran listened carefully (perception check) and crept near the blaze. He pin-pointed the grue's location, and fired another ray of frost at him - an he rolled a natural 20! The grue shrieked, and was vanquished. His magic crossbow clattered to the ground. Theran took it.

Theran and the two rogues made their way back to the march. Vaimish was happy to see his sister safe and thanked Theran. The rest of the march to Tradegate was Tacharim-free, and Theran was considered something of a celebrity to the paladins and the march followers.

This solo game went really well. George, Theran's player, rolled high all night and he was more than up to the challenge of taking on the Tacharim on his own.

I am really looking forward to the next chapter, as it is a really fun adventure.

Click here to go on to chapter 4, where the return of Bidam leads to "ribald" adventures in Sylvania and a pretty epic trip to The Beastlands to heal an ailing nymph.
Posted by Sean at 12:28 AM

I've been reading your blog for a while, and as a long-time fan of D&D and particularly the Planescape setting I just wanted to say that this is one of the best gaming blogs I've ever seen. I hope you keep on running games and writing about them for a good long while.

Rynath Wilson: Thanks, I really appreciate it! You know, after I read this I was thinking that I wished I had started this blog in 2008, which is when I started running public play games.

My plan for Planescape is to run The Great Modron March, then Umbra by Chris Perkins, and the Dead Gods. I'll be happy if we can just finish the modron march, but I really like the idea of running a nice, full Planescape campaign. It's such a great setting and I feel like as a DM I should try and run all of the classic stuff that I can.

I'm posting almost 2 years after you wrote this and I doubt you will ever read it, but content like this is amazing to read. Learning how DMs, more experienced than I, play the game is a really rewarding thing.If you ever happen to read this, and even remember, I have a question: in The Great Modron March book it says there were labs in the torture keep where other innocent creatures were being tortured and kept, did Theron kill them in burning it down, or did you just not have NPCs in the lab?

Ethan Deree: Thanks! I don't remember, I think they helped the innocents get away. Generally, I don't like torture in D&D so I might have took it out. If I do torture, I usually make it comedic torture... it's just too unpleasant for me.

This thing tells me whenever I get comments, so I'll see anything you write!