The Great Modron March - Politics of the Beasts 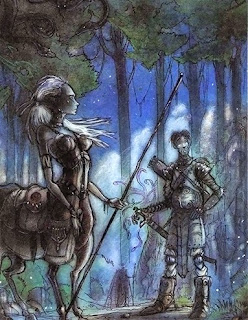 Last night, we played through chapter 4 of the classic Planescape adventure The Great Modron March. We tried some really weird twizzlers - strawberry lemonade. The goo inside is a little unsettling.

We got right down to business.

Theran returned from his solo adventure (Jessie couldn't make it last week). We decided that Bidam couldn't go because he had "the shits." Yes, it's that kind of game.

Bidam spent his time in the bathroom while Alamandra the githzerai talked through the door about Zerthimon. Alamandra also brought up that her githzerai superiors had told her that the march would soon travel through Limbo, home of the githzerai. She thought that the heroes might be able to make some money leading the march through the chaos of Limbo.

Theran returned to their home in the Clerk's Ward of Sigil with his new friend Xaldra Miloni. A month passed (where the PCs paid their lifestyle cost - I want to make sure I use downtime as much as possible, as I really like it). Then Xaldra decided to take a trip to the gate town of Sylvania and invited the heroes along.

What followed was a month of drinking and partying with elves, humans who worshiped Greek gods, and bariaurs (half-goat people). I had them roll on the carousing table in the DMG a few times. I'd prepared some stuff as well.

Theran at one point woke up in a strange place and found he'd been robbed of 50 gp. He then went on a drunken gambling spree and made most of it back. He met some elves from the nearby plane of Arborea and learned about an evil place there called Lolth's Grove, where there were giant spiders and banshees.

Bidam lives by the life philosophy of "hit it and quit it." He won some gambling money, and then rolled "you have made an enemy" on the carousing chart. It played out like this. Bidam started drinking with a beautiful lady in a toga (she was a worshiper of the greek gods). She thought Bidam had "the raw masculinity of the cyclops". They went back to her place and messed around. Then, a man named Titanicus exploded into the room in a jealous rage. Titanicus was her brother... and her lover! He punched Bidam, who ran away as fast as he could. 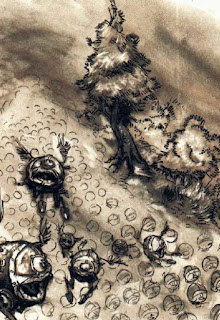 After 30 days of debauchery, the adventurers returned home. I dropped the adventure hook on them. A friend of theirs who was following the march in The Beastlands had been bitten by an aeserpent and had fallen into a coma. There was a possible cure - a nymph in The Beastlands could heal him. The heroes decided to go there to meet with the nymph.

This adventure structure might annoy some players. Basically, it goes like this. The modrons are blown off-course by a mortai (a living cloud) and are polluting a river with their oil. Dogs and druids won't let them alter their course. The heroes have to:
Certain players will find this amusing. If not run carefully, some will find it annoying.

I mitigated this by running this more as an exploration of the cool stuff in the Beastlands. The Beastlands are a plane where mundane animals reign. There is a ruler of each type of animal - a dog lord, a cat lord, etc.

Shortly after the heroes arrived, I had the beast pox kick in. This is a sort of beastlands affliction that makes people become more like the animal their soul represents. This means I had to pick an animal for each of them:
They were a bit freaked out by this transformation. Theran immediately decided to consult his mimir, the golden lion skull he'd been given by the mayor of Heart's Faith. The mimir can give information. It explained the beast pox to them, and they continued to consult the mimir for lore throughout the adventure.

Following the Chain
The adventurers made sure to keep their eyes closed when they met with the nymph, They'd heard looking at her could cause death. In this case, she was so messed up from the modron oil in her river that her powers weren't working.

They caught up to the modrons and were unsuccessful in convincing the dogs and the druids to let the modrons pass.

The heroes backtracked and went to find the wemics who had forced the modrons into the river. Along the way, a puma petitioner beegan to stalk them. A petitioner is a human in the prime material that had died and, in this case, been reborn as a puma in the beastlands. He did not remember his life, but he did remember some spells he used to cast.

The puma cast detect magic and saw the heroes had magic items. The puma demanded that Theran hand them over. He tried to cast a command spell on Bidam, but Bidam shook it off. The puma fled as the heroes rushed it.

The heroes met with the wemics, who directed them to Ilifar-in-the-Wing, home of the avariel (winged elves). This is quite interesting, because one of the villains in my Elemental Evil game is linked to the avariel. 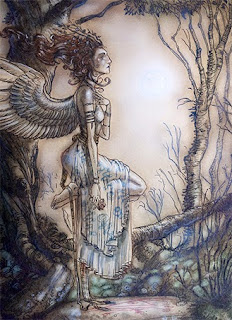 The avariel are really pleasant and friendly. They gave the heroes an audience with their prince, after the "revels". The heroes were guests of honor and were fed, danced with, and then featured in a magic light show that featured an image of their glowing faces merging with their beast pox animals, which they found a little unnerving. 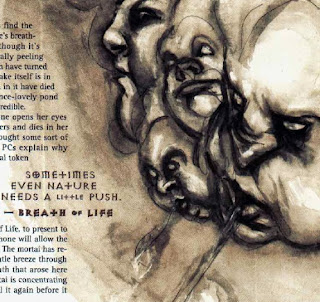 Then it was on to the mortai, who is awesome and has great descriptive text. Here is an example:

"Once the PCs call out the name “Breath of Life,” the lightning stops and a face forms in the darkened cloud above them. The stern and wrath-filled face that peers from the cloud should be enough to make even the bravest hero cower. However, the being‘s anger isn’t directed at the party, and the face speaks but one word with the echoing boom of the thunder: 'Bide.'"

Once they realized they had to go back to the nymph just to get a token of her will, they were a bit annoyed. It was also a race against time, as their friend in the coma wouldn't live long, and the nymph also would die within a week (It had been two days so far).

As the heroes walked back, they came upon a zebra herd. Bidam held out some food, and with a good check he was able to befriend and ride a zebra.

Theran wasn't as lucky. He repulsed every zebra he approached. All of them fled, save for a zebra runt. Theran was able to befriend and ride this little fellow.

Now with mounts, they could get back more speedily. As they made their way to the river, the puma petitioner stalked them and pounced! It knocked Theran from his saddle. He blasted it with a fire bolt that staggered the creature.

The puma tried to use a command spell to make Bidam flee, but again Bidam resisted. It leapt up onto a tree branch. Theran blasted it with a second fire bolt, killing it.

Bidam skinned it and plans to use the puma pelt to trick out her room in the clerk's ward, maybe making a bed covering out of the pelt.

There was a montage of riding zebras and going back to each of the factions again. Breath of Life was extra-helpful, showing up to rain on the river, washing away the modron pollution but making an eye in the storm so that the heroes wouldn't get wet.

The modrons were able to resume their course. At last, the heroes could return to the nymph to get the cure for the poison.

The heroes returned to the nymph, covering their eyes, and the eyes of their zebras. The nymph was restored, and most pleased. She gave them a vial of pure water that would cure the poison.

I rolled randomly to see which hero she liked more (in general, nymphs are attracted to people with an 18 charisma of chaotic and good alignments). It was Theran. She cut off a lock of her hair and put it in his hand, and she told him it was magic. The heroes thanked her and left. Bidam vowed one day to return to the nymph to attempt to woo her (not the language he used).

As they made their way back to the portal, Theran asked the mimir about nymphs. I used this opportunity to dump a bunch of factoids I'd dug up about nymph stats:
Next time, the plan is for our heroes to ride out their beastpox, use some downtime to maybe work on a magic item, and then go through chapter five, which seems a bit similar to the chapter where the modrons were abducted.

It was a good session. I like this adventure, though the DM might need to gloss over certain parts and add in encounters where needed.

Continue on to chapter 5, where Bidam runs afoul of a crystal ball...
Posted by Sean at 8:10 AM

It’s so nice to read your entries that I almost wish there was a streaming of your Planescape stuff.
So, now this is an unusual request, but could you provide us with a flowchart for a campaign using the Planescape anthologies and maybe even some 5e stuff?
I have an idea of running a West Marches-style campaign where a group of characters would be hired by Lissandra the Gate-Seeker, who would take a more Dirk Gently-type of role, and they would investigate some planar stuff in an episodic kind of game, that fits perfectly with many Planescape adventures.
And before or after dealing with Dead Gods, I would just stop that Planescape “season” and start a different group of characters in a Curse of Strahd campaign, where they would find elements connecting to the Planes once again.

I also plan of introducing hints that the Doomguard is involved in Acerarak’s death curse stuff. Maybe the planar characters might even find out that they helped Acerarak to build the thing (Soul Mill? I forgot it’s name) by trading some vital items with Doomguard’s members.

Anyway, I’m just interested in hearing about the way you handled things, since it was a similar project, and what would you change if you were to do it again!

Thank you, anyway, excellent blog that helped me a lot when I was running SKT!