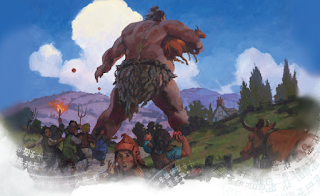 Episode 36: Small Packages
This is one of those episodes where I can’t avoid spoiling the jokes. You might want to watch this session first before you read any more. 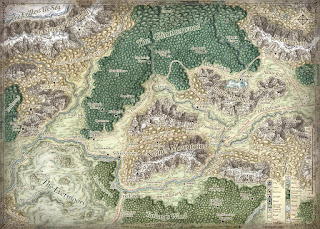 The heroes are in the Silver Marches. They just survived a hill giant attack and they are quite wounded. Evelyn had gotten separated from the group last session because.. she got carried away catching snowflakes on her tongue.

Evelyn finds the group and drops some healing on Diath and Paultin. She checks on Zog, the dwarf NPC. He's not breathing. Hmmm.. will Diath use the gem? Zog has a diamond that Diath can use to bring him back to life. I think this is a one shot deal. Once Diath use the power, it’s gone.

Evelyn prays to Lathander to apologize on behalf of her allies. Her friends let Zog die and she wants Lathander help them be the party he wants them to be. Anna is in rare form today.

The group looks through Zog’s stuff. Here’s a list:
It’s basically a list of what every level one character has on their sheet and never uses throughout their entire adventuring career.

They also find a map with dwarven scrawling on it. Nobody in the group can read dwarven.

Evelyn say that she wants to give the diamond to an heir of Zog, or maybe donate it to the poor. The group is appalled.

Strix puts the cowbell on Hootie the owlbear. Hootie begins to chow down on a giant’s corpse. Hootie is still wounded. Evelyn lays on hands and heals Hootie, who is female, for 10 points. I’m not sure if it was ever declared that Hootie was a lady before today.

Raising Zog: Wow. Diath is going to use the diamond to resurrect Zog. He makes this decision very quickly. I’m shocked that there’s not more debate. I mean… it sort of feels like a waste. I guess maybe that’s meta-game thinking, but still...

Diath is thrown into a trance. His eyes turn black, his skin turns pale. Energy flow through him, and after an hour, Zog is back among the living. Diath’s power is now gone.

The group rests. We learn that even Hootie and Mourning Glory can fit in the waffle hut. Next morning, time to go to Citadel Adbar. Will Hootie come along? Yep. 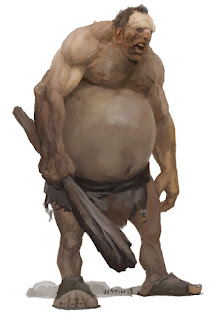 More Giants: The group travels for a bit and come upon a wounded hill giant. It’s Fo, one of the giants the group fought last session. He has a rock, ready to heave it at the group. The female is nearby.

The female shouts, "Bring me food!"

The battle begins and the female flops onto Zog. Oh no, imagine if he's dead.

The male giant is slain. Paultin thunderwaves the female off of Zog using a 3rd level slot, rolling her off of him 10 feet. Zog is alive! Wait.. she does a flying butt drop on Zog. Horrible scrunching sound.

It seems like the DM wants Zog dead for some reason. Maybe he didn’t expect the heroes to resurrect Zog and it messes with his plans?

At this point in the session, we experience what the people in the chat refer to as The Paultercation.

The Paultercation: Strix and Paultin are next to each other, casting spells. Paultin casts suggestion on the female hill giant, and points out that if she's hungry she can eat snow. She loves this idea and starts to do so.

Strix sees that she is buying it, but Strix tells Paultin that she really wants to destroy her with a fireball. Murderbot takes exception to this and immediately fires a dart into Strix's neck, doing two points of damage and knocking her unconscious! As she drops, Strix calls out to her owlbear: "Avenge me!"

Hootie the owlbear is confused and ambles over. Hootie looks at Murderbot. Murderbot tries to shift the blame to Paultin. Hootie nudges Strix with her beak.

Evelyn runs over and tries to lay on hands to heal Strix. It does heal damage, but it doesn't make Strix conscious.

Paultin chastises his "son" Murderbot, who Paultin has re-named Simon. Paultin encourages him to channel that energy against the giants. Murderbot shoots a dart into the female giant, which breaks the suggestion spell.

Evelyn immediately starts referring to Simon as if he is her son and Paultin is the father. She flies over and does a massive pile of damage to the female giant. Paultin casts dissonant whispers, which does psychic damage and kills the giant.

Evelyn says, "That's what I call a brain freeze." My god, the dad jokes are just exquisite this session.

With the battle over, Evelyn says that they might need to put their son into some kind of after school program 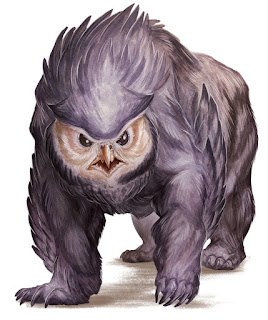 Hootie: Diath is not happy at all with Murderbot. He questions the evil little thing and makes an insight check. He rolls a natural 20, so he knows that Murderbot went out of his way to use a sleep dart rather than a more deadly dart. Diath also sees that Murderbot is hiding something.

Diath picks up the still-unconscious Strix and puts her on Hootie. The way he describes what he's doing definitely sets off some emotional alarm bells. He doesn’t “pick her up,” he “takes her in his arms.”

Murderbot tries to settle thing with a handshake, but Diath refuses.

They check on Zog. He's dead! Once again, Diath went to great lengths to help a dead ally and it didn't work out at all. The group is dying of laughter and somebody asks Jared, "How much do you think Chris Perkins hates you?"

What else is there to do but loot Zog? Strix comes to and digs out the heart of the female giant. Strix is covered in blood now. The heart is the size of a soccer ball. Then she decides to cut out some fat to use for candles. The sight of this make Evelyn vomit violently.

This is a really good episode. Fun and funny right from the start.

Strix threatens Murderbot. Somebody points out that Diath is basically the dad of the entire party. Very true!

The group buries Zog. He's flat so it doesn't take long to dig a hole. Zog's mission was to deliver a message to Citadel Adbar. The group doesn't know what the message is! They decide to head there anyway, at least to let the dwarves know what happened to Zog.

The Waffle Crew travel for 3 days and they are running low on food. They make camp in the magical waffle hut (Leomund's tiny hut). They estimate they are still one week away from the mountains.

Last session, Strix was given the power to change into animal forms. She could turn into a bird and fly around, looking for animals that could be hunted, right?

The group comes up with an awesome idea. Strix can turn into a mammoth and they can cut a hunk of meat out of her and cook it up! That's D&D right there. The group is up for it, but we don't really get clarification from the DM as to whether that would work or not.

That's because something happens. Paultin wants to eat Hootie. The group notices Hootie is not doing well. Dying from hunger? No! Hootie is pregnant and about to give birth!

Evelyn tries to deliver the baby. Animal handling check: total of 3. Oh wow that is... yikes. Strix assists, giving Evelyn advantage. Evelyn rolls again and gets a total of 10.

Can't Paultin add dice to skill checks? Or is that just ability checks? I am pretty sure he can use bardic inspiration to add +d8 to people's rolls 3 or 4 times per day.

Welp.. Hootie dies giving birth! The baby lives. Chris points out that for all they know, owlbears always die when giving birth. The baby is gooey and squeaky.

The group proceeds to eat and make jerky out of Hootie while they think of a name for her daughter. That cracks me up. Strix calls it Baboo, bu that's not the name. The baby owlbear's name: Waffles. Perfect!

That's where we stop. The heroes hit 8th level.

I loved this episode. It's probably one of my favorites out of the entire campaign. It was funny the whole way through.

I really need to look through Storm King and see what the deal is with Citadel Adbar, I don't remember anything about it.

Great show, definitely check it out!
Posted by Sean at 9:56 AM

For clarification, it was Diath who put the asleep Strix up on Hootie, not Paultin!

You mentioned wondering if Murderbot was going to steal the Strahd puppet-- remember, said puppet is by now miles away in Drizzt's possession.

On that subject, however, Chris hinted on Twitter that the fan-theory that Strahd wanted to be captured in order to escape Barovia may have been accurate...

Anonymous: Oops... thanks, I will fix it.

Glados131: You're right! I forgot. How will Strahd break out? Maybe Chris will set up a situation where the group needs to free Strahd to survive some kind of event or threat. Also.. Strahd is sunlight sensitive, right? If the group wants to get rid of Strahd, couldn't they just free him in daylight and watch him die?

Don't know that they had a way of freeing him even if they wanted to.

Zog's keys were definitely in his beard.