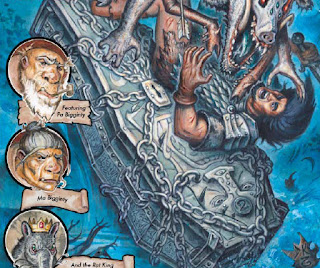 We played through the first half of The Chained Coffin on Saturday and it was really good. The guy who wrote this, Michael Curtis, is my favorite current adventure writer.

If you picture an adventure set in a mountainous region like the Adirondacks that contains farmers, it seems like it would be boring. But here's what he gets out of it:
Every encounter is short and inspired. This adventure is part of a boxed set, yet really you only need to read 24 pages to run it.

As a bonus, we added in a new player. She is Annalise, a fellow Dice, Camera, Action fan. She fit in perfectly and will be a part of the game going forward.

Her character is Val, a tiefling sorcerer with a backstory that has not yet been revealed. My first challenge was to get her character to meet the group.

We ended last time with the group about to look for a beast of burden who could pull their cart that contained the Chained Coffin. My plan at the time was to dig up a few cool monsters and let them pick.

When I sat down to prepare this, I thought it would be a good idea to use Volo's Guide to Monsters as much as possible. Since early in the 4e era, I've found that it is best to use the material in sourcebooks as soon as you buy them, otherwise they tend to never get utilized.

So I flipped through Volo’s and didn't find many suitable creatures.. until I landed on the Froghemoth. The search was over! These creatures are very powerful, so I whipped up a smaller, albino version of a froghemoth that was more sympathetic and much less deadly. 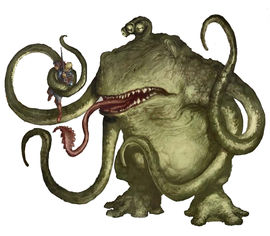 Val was traveling through the Thunderdelve Mountain region alone, passing through a swamp. She spotted a band of bullywugs (frog-people) picking on an albino froghemoth. They had it in a cage suspended over the swamp water. They were poking it with spears and throwing garbage at it.

Val immediately emerged from the brush and called out, "Why don't you pick on someone your own size?"

As fate would have it, the heroes happened to be within earshot. They'd heard that the swamp might be a good place to find a large creature.

They saw the bullywugs preparing to rush the lone tiefling. Mistletoe conjured up a spike growth spell beneath the feet of the bullywugs as Ramrod charged.

Val used mage hand to open the door of the cage, freeing the froghemoth Confused, it plopped into the water. It kept its three eyes above water, watching everyone.

One Bullywug made a mighty leap (they can jump 20 feet from a standing position) across the water to where Val was standing. The bullywug stabbed her.

Kyrin killed one bullywug with the Hammer of Vitroin and his allies pummeled more. Ramrod jumped into the water and swam over to help Val. The froghemoth watched him intently. Ramrod isn't so great at swimming and he struggled to keep afloat in the viny, murky water.

Val hit the bullywug with a ray of frost, then Ramrod popped up and destroyed it with his maul. The bullywugs were dead.

The froghemoth crept up and offered Ramrod and Val some delicious lilypads. Val declined, Ramrod ate some.

Introductions were made and basically we got a long form version of the old "You look trustworthy" trope and boom, new member added.

The heroes were able to lure the froghemoth along using delicious vegetation as bait. Both Val and Ramrod quickly befriended the creature.

The group affixed a harness to the frohemoth. They named him... Hoppy. They began the search from the Luhsaal Wheel, pulling the cart containing the chained coffin. 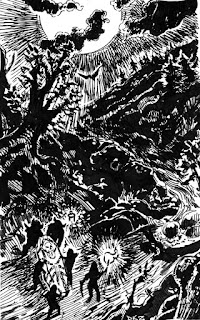 After a day of traveling in the forest, they made camp. Val used Hoppy's slimy bulk as a pillow. As the night wore on, they spotted some kind of creature flying overhead. It was humanoid, had moth wings and fiery red eyes. It looked right at Kyrin, but flew off into the night.

The next day, the heroes came upon a hut on stilts. There were skulls on pikes around it, and more skulls hung from trees at the edge of the clearing.

Ramrod boldly walked out there, messing with the fluffy dandelions. The door to the hut opened, and out stepped Granny Huldah. She was ten feet tall, had furry arms and legs, and her long hair mostly covered her face. She had a pet dire boar at her side.

Mistletoe immediately recognized that she was a hag of some sort. She questioned the heroes, and offered to make them a deal. She would direct them to the Luhsaal Wheel if they would get her the fingernail of an ogre. She needed it for a potion brew. 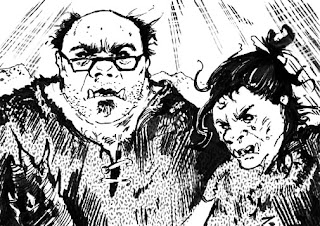 The Biggintys lived in a cabin made of massive logs.  Mistletoe cast Pass without trace and Val made herself invisible.

Hoppy spit the rabbit out after a few chews. Mistletoe theorized that Hoppy was a vegetarian. Later, Hoppy tried to chew on a squirrel but that time, the group stopped him.

Val peered in the windows. She saw a male ogre bossing around two females. He had glasses hooked on his overalls. There was another room in the cabin that she didn't peer into. They'd soon learn that it contained Ma and Pa Bigginty.

Ramrod threw his voice and pretended to be an ogre, another sister who had done something stupid. The male bought it and stepped outside.

The group paused. They hadn't really thought this through. They didn't know what to do next!

Ramrod ran up, jumped in the air and headbutted the ogre. The ogre's glasses went flying.

The group charged forward and had a chaotic battle. Mistletoe ended up hanging on the ogre's arm. The sisters came outside and one hit the druid with a broom, doing 13 damage and knocking him to the ground.

The other sister quietly snatched the glasses. The group never did find out why the glasses were so important to the ogres.

Val and Mistletoe quickly made up a story that they were doctors and needed to do a procedure on the male ogre. Val used the spell friends to get the one female off track. 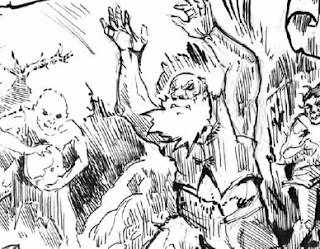 Kyrin had a hilarious idea. He cast the spell command. The one-word command: Fingernail. The ogre made an intelligence check and rolled abysmally low. He reached down and tried to pull off one of Mistletoe's fingers. Thankfully, Mistletoe resisted.

The group knocked out the ogre and Mistletoe cut off the fingernail on his right index finger.

One of the sisters called out for Ma and Pa. Ma came out with a massive rolling pin. Pa hobbled out. Pa has "the gout" so he couldn't walk too good. The group ran away as the Biggintys shook their fists at them.

The group gave the fingernail to Granny Huldah and got their directions.

After a few days of travel, they spotted a lone grave. Val and Mistetoe approached it. They felt a breeze and heard a quiet voice whisper: "Go on and take it. I ain't got no use for it."

They heard a fiddle playing in the distance. The inscription on the grave:

"Here lies Japthon of the Fiddle, who died helping the mountain people he loved. Never one to back down from a fight against evil, we Thunderfolk owe him more than we can ever repay.”

The heroes decided to dig up the grave. In the coffin, lo and behold, was a magic item! It was a medallion of clear thought, an item that lets the wearer cast detect thoughts three times per day.

The group agreed that Val should have it. The heroes buried the coffin and continued on.

At some point in here, the group had an amusing conversation about how inanimate objects are always talking to them. The hammer of Vitroin, the Chained Coffin, and this dead fiddle guy. The Coffin was getting on their nerves, constantly asking "Are we at the Luhsaal Wheel now?" and "Did you get the fingernail yet?"

The adventurers came to a weird crossroad in the middle of nowhere. Each road branched out from the cent in four directions, then petered out after about 100 feet.

Suddenly, standing in the center of the crossroad was an individual clad in black. He had a pointy goatee, one hoof and one regular foot, and he was wearing a cloak made of cat fur. As in, housecat fur.

He whipped his cape around with a flourish and smiled at the heroes.

That's where we stopped!

Good session, everything went smooth. Both of these groups have come together real nicely. This group will be heading to Sigil to go through some Planescape adventures in about a month.

This is one of my favourite adventures of the past several years. I ran it for my 5e group and they had an absolute blast and still occasionally bring it up.

Man, your party is wacky as all get-out.

In some ways it makes me itch to say "what, they own a Froghemoth?"
"What, they can use Fingernail as a command?"

I want to be outraged, but your blog does something really unique - it makes the inner child in me shout the adult down, and say "THAT IS ALL BLOODY AWESOME", and of course it is absolutely true.

This was a delightful (if bizarre) read. :)

Justin: It's awesome. I have the digital version and I like it so much I might buy the boxed set.

Ant Wu: I am not a rulesy guy. Sometimes I get too loose and I'm definitely in one of those phases right now. The froghemoth is an albino runt, it doesn't have the stats of a normal froghemoth. His reflexes are so bad that he isn't much of a combatant and he's a vegetarian so he doesn't eat people/meat. Meat actually makes him ill. Fingernail as a command was funny and it gave me ideas so I rolled with it! I do plan on sharpening up as far as rules go. I can never remember the names of 5e skills (4th edition is tattooed on my brain permanently) but I'm working on it. Thanks!