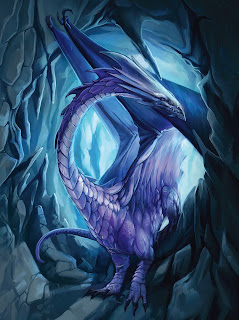 We played this a little over a week ago. I like playing through the Perkinses because you can experience ideas he still uses today.

I am still making my way through Brimstone Angels. There’s a bit too much arguing in it right now for my liking, but there is a lot of stuff that I enjoy about it. I am looking forward to peeling it apart once I have gotten through the whole thing.

Last time, the heroes had come to find missing ambassadors and a crystal dragon. They had a weird encounter with a deep dragon who ran from them after breathing on Kyrin. 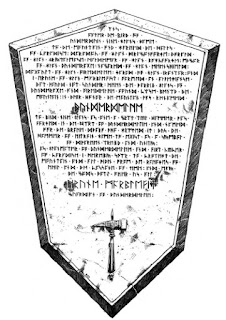 The heroes were partnered up with their new buddy Gazgar the wereboulder. They made their way to the cavern where the crystal dragon, Glittershard, was digging. Glittershard explained that he was told that if he stopped digging, the ambassadors would be killed.

That's a nice little way to avoid a pitfall. The map of this adventure provides a straight line to the bad guy and this dragon. The group can skip the entire complex. This adventure accounts for that possibility and the group has to backtrack to find the ambassadors.

The heroes checked out a clear pool of water. They saw big pipes in it. These pipes connect to a dwarven bathtub in an abandoned area of the fortress.

I was sitting there expecting the group to zip right to the ambassadors and, in my head, I was mapping out where the bad guys were and how this was going to work. Then Ramrod decided to swim into the pipes. He jerked the grate open and in he went.

Suddenly we were off on a complete detour. Ramrod emerged in the bathroom and hopped into the tub. There was translucent goo in it - a crystal ooze! It began to engulf him.

The heroes had tied a rope to him and swam through the pipe to help their goliath chum.

They killed the ooze and began to explore this crumbling section of Thunderdelve that the dwarves left alone.

They ended up opening the door to a room with a crumbling floor. Two dwarf heads with bat wings screeched and flapped toward them.  Vargouilles! They're pretty cool, they are from Volo's Guide to Monsters.

The group shut the door. They assumed that the vargouilles couldn't turn a door knob. From the other side, the heroes heard chomping noises and saliva glooping. They were right. 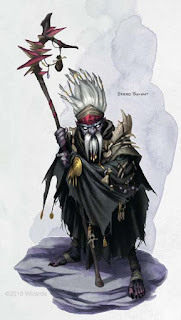 They then proceeded to explore right to the area where the secret bad guys were. I did not expect this at all. I kind of assumed that the adventurers would never even run into these creatures.

The bad guys are derro, crazy blue gnomes. They're behind this whole scheme. The group beat them down. One tried to flee, but Ramrod threw the wereboulder at him and he was down.

The derro had a book on them that contained a clue to a dwarven vault. The heroes eventually found the vault, which contained many dwarven treasures. One such treasure was the hammer of Vitroin! It was a dwarven artifact that could heal and telepathically communicate to the wielder in a mighty, heroic voice. 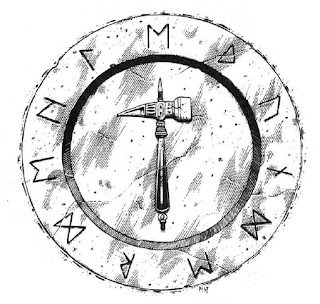 Ramrod was very freaked out by this. The hammer could sense what was going on in this place. Someone was using a diadem of thought draining to fog the minds of the dwarves, making them easy to manipulate and control.

The hammer declared that he could destroy the diadem in a single blow! All the group had to do was to find it.

The heroes showed the hammer to Drull, the ruler of Thunderdelve. Drull was still recovering from his wounds. His beard had been burned off, but the group had made a pretty snazzy fake beard for him last session.

By burning one of the cure light wounds spells, the hammer could embearden someone. Thanks to the magic of Vitroin, the king had a full lustrous beard that left the other dwarves in awe.

By the end of the adventure, Kyrin was wielding the hammer and he had a thick black beard, which he says he is keeping.

Fully embeardened, the heroes strutted off to break the ambassadors out of the prison. When they got there, they found the deep dragon waiting for them!

The heroes boldly charged in and pounded on the dragon. It turns out that this creature wasn't a dragon at all. It was an illusion-created creature known as a baldandar. It turned out that the derro had brought the baldandar here to wreak havoc and subjugate the dwarves.

They took it down and saw that it was wearing the diadem! Mighty Vitroin indeed shattered it in a single blow and the ambassadors were freed.

The dwarves slowly became less stupid and Glittershard no longer had to toil. The bad guys were having him dig a connecting tunnel to the underdark settlement of the derro. They had wanted to use Thunderdelve as a staging ground to raid the overworld from.

From outside came shouts and mighty roars. Glittershard's draconic parents had arrived!

The group brought Glittershard out there. I read this big box of flavor text that made the players groan. The parents hugged their little child and he learned a valuable lesson about life and the dangers of strangers.

The dragons gave the heroes two gifts:
Drull agreed to finally go and meet with his brother in Underduin. The group went along.

In the adventure, it says that the group is invited to stay in Underduin for a while. The dwarves want to make statues of them, and the process takes four months.

The heroes agreed to stay.

Next session, we'll play through some of that time.

Good group, good session! I didn't prepare this adventure like I should have and I wasn't really happy with what I did with it. The players made it fun, though.

I am getting the hang of sitting back and letting the players chew scenery. It seems like all I have to do is be mindful of the pacing.
Posted by Sean at 9:37 PM

It was a very fun session, but a little on the Saturday morning cartoon side with the life lessons at the end. And Ramrod apparently likes his magical weapons silent!