Dungeons & Dragons - The Star of the East

Last Saturday, we played some more of the KEY RING campaign. This was session 4.

I had decided to bust out a heist adventure I tried to run when I was a kid. It is from a 2nd edition supplement called Thieves of Lankhmar.

The Days Before Online Shopping: When I was a little kid, there was a hobby store near my house. This place was my main source for D&D stuff. The guy running this store was nice, but he knew nothing about D&D. He ordered the least desirable products on the market. Maybe people just bought up the good stuff. All I know is, every time I went there my choices involved Dragonlance: Otherlands and lots of Lankhmar products.

I didn't know anything about Lankhmar but my options were extremely limited. I ended up buying Thieves of Lankhmar. In it, there is an adventure where the heroes can infiltrate a costume party and steal a magic gem.

As a kid, I could not wrap my head around all of the details and I ended up running a very loose version of it. In that session, I learned an extremely important lesson that has held true for my entire life: Players love in-game parties. Why? I don't know. But they do!

I decided that the key ring would go through this scenario, and this time I would run it the right way. I transplanted it from Lankhmar to my campaign world.

Lankhmar vs. Monty Haul: I actually put the city of Lankhmar in my campaign setting back then, as the sister city to my homebrewed city of Olwynn. The cities eventually went to war.

This war culminated in an epic battle where the characters of 12 year olds fought Fafhrd and the Grey Mouser, the heroes of the Lankhmar books. The heroes completely slaughtered them. The party consisted of 12 characters absolutely overloaded with magic items. These heroes were so spoiled that nobody wanted Wave, the artifact from White Plume Mountain.

In my campaign, that war took place about 1,610 years ago. A new city was built in the ruins of Lankhmar - Dunwynn, city of scumbags. It's a sleazy dump and nobody likes it. I have been meaning to run a scenario there for a long time. Dungeon Crawl Classics has all of those Lankhmar adventures out, I should probably get one. The heroes had just defeated a dog-sized dragon. They returned to Pollidemia's tower to rest. Pollidemia is a fallen, formerly evil goddess.

The heroes got her goblin sidekick, Slurp, some juice. Then Finy gave Slurp an epic belly rub and regretted it immediately. The adventurers went to sleep in the attic full of creepy, evil artifacts.

Infernal Contract: Gurn had a dream about Zotzpox. They have this weird connection, because Gurn worships him as if he is a god. Gurn has been instructed to sign an infernal contract, which means that when he dies, his soul belongs to Dispater.

Unleashing the Brainhole: They'd rescued a devil cultist named Sekelith last time. They stabbed him in the head, but he lived. He had this big hole in his skull that was really freaking him out. Pollidemia has been tooling with a magic crossbow that has a drow brain affixed to it. The Crossbrain was fired into the hole. Sekelith gained memories and powers of a drow elderboy. The 4e elderboy has powers that make me laugh called "shift blame", "endure torment" and others. The guy was confused, but overall it went pretty well. He’ll probably serve Pollidemia as if she was a drow matron.

Somewhere in here, the quote "Unleash the brainhole" was uttered, to my great amusement. 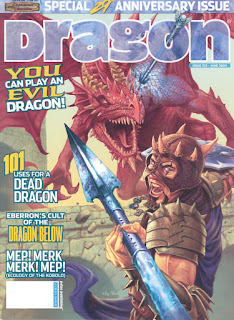 Dragon Items: They took the dog-sized dragon corpse to a guy who could make magic items out of it. This is based on an old dragon magazine article. The items received:
Their friend Loren the sage, who they had just rescued from the devils, has no place to live. To make money, he started cooking up some D&D drugs like the cerebrospinal fluid of the mind bat (from the dungeon dozen site).

Somehow Finy got involved. He went into the city to buy the ingredients for Loren.

The heroes heard about this gem called The Star of the East. The devils were afraid of it. The belief was that it is connected to angels in some way and could completely ruin their evil schemes.

A snooty noble had it. The group ended up deciding to steal it.

The Litterer: The heroes scouted out the guy's mansion in the rich part of town. In this city, there are weird god-like immortals that protect each district. This one is guarded by Malificia the Hag, who rides around on a carpet of ladybugs. Anybody who litters here is turned into a ladybug.

On their way to the mansion, the heroes were stopped by cultists of Vecna handing out pamphlets. In my campaign, Vecna was slain in my Scales of War campaign and he was a sentient cloud for about 500 years. This cult brought him back to god status.

Gurn handed them a pamphlet that extolled the virtues of Zotzpox the imp. The cultist rolled his eyes. When the group turned to leave, he chucked it on the ground.

The players started laughing. I forgot! He littered! Malificia the hag appeared. The cultist of Vecna shrieked and was transformed into a ladybug and added to her carpet.

She advised the heroes to keep the city nice and clean, and went on her way.

The group scoped out the mansion. They learned that there was a costume party in 4 days time. 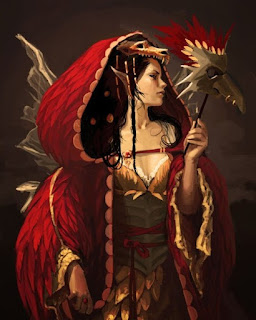 Costume Fitting: The group went and had costumes made. For some reason, they decided to all wear owl costumes. That's when we learned that Ashley works with birds, and she began rattling off different bird types. That's one of the great things about D&D. Players can utilize their skills and real world knowledge to add a ton of great stuff to the campaign and everybody benefits.

Finy the halfling and Gurn the gnome decided that they were going to wear one costume together. Gurn was going to be on Finy's shoulder while Finy wore stilts. They ended up getting the freshly-severed arms of a satyr to use as well (long story). Gurn used the tendons to make the fingers move.

They needed gold invitations to get in. The group found out who made the invitations and decided to go steal the plates to make it. This plan went very poorly. Gurn chatted up the shopkeep while Finy and Dornella the NPC tried to break in the back door. Finy couldn't pick the lock.

Finy and Dornella got in, but the shopkeep ended up going back there to show Gurn the plates. He saw the rogues and freaked out.

From there, the group basically grabbed the plates and ran away as fast as they could.

Once they'd made their phony invitations, Finy and Lemuel actually broke back in to the shop to replace them. They almost got spotted by Malificia the Hag, who happened to be roaming by, but they successfully hid.

After a few days of stilt practice, the group took their fake invitations and headed to the party. The party started at 8. They decided to get there at 7.

They got in with no problem. There were servants setting up snack platters.

Party Pies: Andrew told us about 'party pies', which I'd never heard of. They're little pies with meat in them. They sound delicious. Did they have party pies at this nobleman's party? Hell yes, they did. All sorts of party pies, real fancy.

The group needed to find this gem. Zavagor asked a guard (there are quite a few guards at this place) where the bathroom was. To his dismay, the guard actually escorted him there.

The bathroom in this adventure is really cool. Anything placed in the toilet is teleported elsewhere! Zavagor was quite intrigued and I can just imagine all the zany things the group might do with that thing.

That's where we stopped!

Normally, I'd have run this adventure in a way where I would relentlessly force things along so that we can get to the party. I've been sitting back more and letting them do their thing. I want the characters to be center stage, so I am trying to let them do what they like. I crack the whip only when it feels like there is no momentum.

This was a hilarious session that would have made a great youtube episode. We'll be starting those in about 7 or 8 weeks, so it should be awesome.
Posted by Sean at 8:44 PM

I'm just getting through all the content on those legacy pages you have and it looks like you continue to use your home world in this campaign? You don't drop place names and previous events like you used to, but you elude to things having happened with various NPC's. Are you running the campaign calendar as if these are all part of that same timeline?

Lately I've been of the mindset that I don't want to confuse new readers by dropping too much homebrew information. I've been trying to stick to essentials.

Did you really read all that stuff?! Those things are long! Scales of War and Savage tide, I wrote about every round of combat practically.

I still haven't got through it all lol. There are so many links within links it's fun to navigate and discover it all. Not playing too much right now, and so I have to get my fix somehow! I really like how you've kept even new stuff linked into your home world. These are things that give the long standing DM some fun even though new players may not appreciate it all yet. Anyway, you've got an awesome thing going here.

Get daily ideas and methods for earning THOUSANDS OF DOLLARS per day FROM HOME totally FREE.
GET FREE ACCESS TODAY