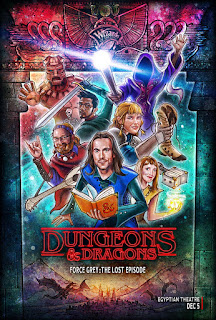 You can watch this show right here.
The D&D site has links to all of the other episodes right here.

I couldn't watch this live, so I went to Twitch to watch the archived video. It's four hours long! That is a long time. Was it worth it? Yes. It was really good from start to finish.

In the beginning, there were audio problems with Matt's mic. It goes away after about 20 minutes. It's not a big thing, so don't let it deter you if you have interest.

Spelling of Names: I am having a real hard time finding out the spelling/pronunciation of certain names. Here's two that I have no idea if I am getting right: Limolai and Dalyra. Also, Brawlwynn is spelled different ways in different places.

New Players: Speaking of the new players, there's two of them. Jonah and Ashley are absent. The replacements:
Good or Bad? I am a big Jonah fan. I think he's hilarious. I was wondering what the show would be like without him. It turns out that these two new players were really good. The more I think about it, the better they are. They fit in seamlessly and were a lot of fun. 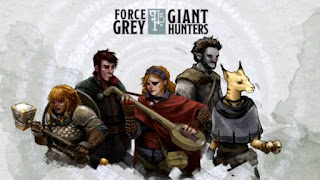 Last Time: The group obtained a piece of the Rod of Seven Parts but had it stolen from them. They are in pursuit of the thieves on a flying chariot.

They have the mini-castle prop that was used in the Acquisitions, Inc live game. This should be interesting! 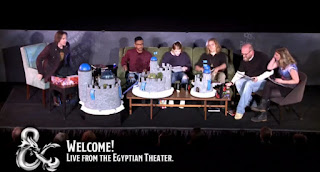 A white dragon is bearing down on the flying chariot. It breathes ice and Joppa is frozen solid. He falls over the side! Dagny jumps after him. They're gone.

Brian is appalled that Matt kills characters of players who can't make it to the game.

The white dragon vanishes into the clouds. The group gets closer to the flying castle. Their flying chariot disappears and they go tumbling through the air. They land on the side of the castle.

There's two other people here - the new characters. They join up. The new players are very funny. 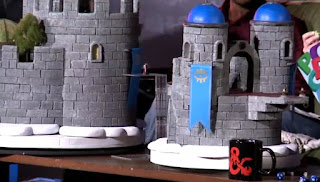 The Premise: This whole session boils down to this: The castle is broken into three sections, each floating separate from the others. Their magic is slowly failing. The heroes need to somehow get from one to another and get back the piece of the rod before the whole complex falls from the sky

Hitch has boots of spider climbing. He goes up a wall and spots a badly wounded giant. There's a bunch of dead Zhentarim nearby. Tyril wants to heal the giant.

The new players are a lot of fun and they fit in great. Skirt of Snakes in particular is very entertaining.


Tyril heals the giant. He asks, "Are you Lawful Good?" The crowd loves that.

The fire giant explains that indeed this is shortly after the events of Acquisitions Inc show. The Giant agrees to help them if he can. The giant could throw them, too.

The giant throws Hitch across. There's some Zhentarim over there. Here comes the white dragon! It freezes three Zhentarim.

Brawlwynn climbs on Calliope's back. Calliope wants to be thrown. They get chucked across, through a door and down a bunch of stairs. They end up befriending two frost giants down there. 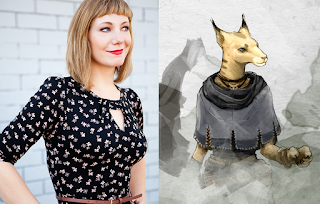 We end up with a severed leg, genitals attached, tied to a rope and thrown across. Hitch is holding the rope while Skirt of Snakes crosses, carrying Tyril in tiny animal form.

Limolai, the woman who betrayed the party and stole the rod, pops up near Hitch. She chucks a dagger at him. Hitch is still holding that rope as the two new people cross. This is nutty.

She shoots at him and misses. Crowd loves it. This is a great crowd, very into it.

Tyril is a baby hedgehog. Hitch tries to shove him down Limolai's throat! No dice.

Skirt of Snakes casts sleep and it works. Uh oh.. Brawlwynn kicks Limolai in the head out of pure hatred. This almost wakes her up!

Tyril still wants to crawl in her mouth as a baby hedgehog. He does... and then becomes normal size! Crowd loves this, hilarious. Nobody saw it coming. Limolai's head "pops like a balloon covered in whipped cream." Wow. Great all the way around.

Uh oh.. the white dragon is back. It flies into a castle and I think it gets hypnotized by that gem. 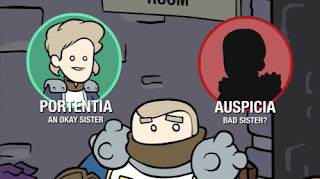 The heroes learn that Auspicia is here. She's the villain from Acquisitions, Inc. and Omin Dran's sister.

There's a whole thing where Tyril uses his tan bag of tricks to give energy to one of the magic gems keeping the castle afloat.

The heroes run into some bad guys. Tyril kicks one of them off the side. Calliope casts suggestion on the other guy and tells him to join his friend. The group tries to persuade the guy to jump. Brian rolls a 21. The guy jumps.

The heroes find some frost giants that are chained up. They free them and make friends with them.

There's about an hour and a half left. This show is very good. The new people are great.

MST3K: I think Jonah is currently filming the new MST3K show that will apparently appear on Netflix. If you're an MST3K fan like I am, this is the most insanely great news ever. I was always a Joel guy and originally I was going to skip this new show, but now that I've gotten to see what Jonah is like there is no way I am going to miss it.

The group is at the central castle, home of Stratovan. They burst through the doors with their frost giant allies. 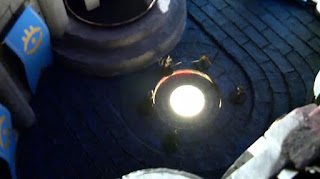 A bunch of villains are in here, including Delyra. She worked with Hitch when he was in the Zhentarim.

Auspicia is here, too. She has the piece of the rod. The rod glows and wow, she turns into Miska the Wolf Spider. Miska climbs up the wall.

She's sort of half-Miska. As each round rolls on, she gains more spider legs. This is what Miska looked like in the 2e Rod of Seven Parts boxed set: 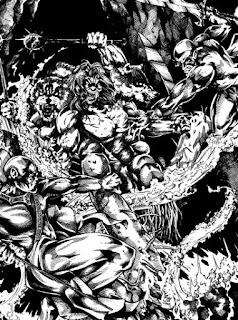 He's the sidekick of the Queen of Chaos, an ancient demonic entity who had the epic battle against the wind dukes. I believe Miska's blood is what transformed the Rod of Law into the Rod of Seven Parts.

Tyril summons a giant toad. He tries to ride it up the wall. Many of the Zhentarim and the Dran Enterprises people run away.

Frog Tongue: Tyril tries to swing on his giant frog's tongue but misses when he tries to hit Miska. It was a very cool idea.

Romantic Interlude: A giant throws Hitch at Miska. He stabs it and then uses his cunning action to run, duck a swipe and grab Delyra and dips her. Hitch tells her that he missed her. Crowd gives a big ovation for that. This is good stuff.

Calliope rolls a one and the strings on her crossbow/lute snap. Broken bowstrings on a natural 1 is very old school.

Skirt In Trouble: Skirt of Snakes is being held by Miska. She's right by Miska's face. She swipes at Miska's eyes, temporarily blinding it. Skirt pulls out some whiskers for Calliope to fix her lute with. Wow that's really clever.

Miska hacks into Skirts and knocks her unconscious.

Brawl Win: Brawlwynn rides her flying shield up above Miska's head and brings her hammer down on for a total of 23 points. Then she uses a bonus action and rolls a critical, killing Miska. 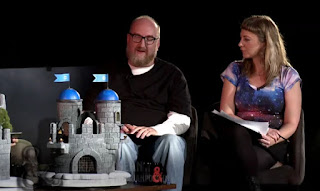 Miska rots away and Auspicia is underneath all the gunk. She says that she's sorry, and dies. A wave of energy rockets out and causes the castle to plummet to the ground.

Tyril has his giant frog swallow Skirt to carry her. That is really awesome. Skirt fails her first death save.

The group prepares to try to survive the castle's plunge all the way to to the ground. Tyril has a great idea. He is going to use his rope of entanglement on Brawlwynn's shield to tie his frog to it. Skirt is in the frog - her legs are sticking out.

The castle falls! It's like zero gravity in there. The group has a few rounds to do something. Calliope smartly looks for the piece of the rod.

Brawlwynn tells Hitch to use his immovable rod.

The Plan: Dalyra grabs the piece of the rod and tries to float over to Hitch. Hitch has a choice - her or the group. He ties his rope to the immovable rod and tries to throw the rope to Dalyra but it goes straight up because they are in a freefall. Calliope uses mage hand to send the rope over to Dalyra.

Skirt gets ejected out of the toad's mouth. Calliope needs to grab her... rolls a 20!

Hitch is dangling 400 feet up grasping the immovable rod. His arm breaks! He's holding the rope with Dalyra on the other end dangling.

The heroes sail to the ground into the dirt. The group makes saving throws. 25 points of damage to Brawlwynn, the rest take 13 points (he rounded up!).

Hitch is hanging way up there. Utkarsh gives a speech and explains that Hitch loves Dalyra. Hitch isn't sure what to do.

Here comes Palarandusk the sun dragon! Joppa and Dagny are on his back. The crowd loves this. He says to Hitch: "You've done well." Utkarsh is genuinely touched.

This show is long, but it's good. It's shocking how smoothly the new people fit in. Every single player on this show was fun to watch. Matt did a great job, too. As the show went, he became more and more of a performer. He'd actually stand up and act things out. It was a lot of fun.

I have no idea what this intermingling with Acquisitions, Inc. will lead to. From what I understand, Chris Perkins is working on the new season of Acquisitions, Inc. right now. Brawlwynn killed Omin Dran's sister. Maybe we'll see Brawlwynn vs. Binwin someday.
Posted by Sean at 1:01 PM

I gotta say, letting Force Grey kill Auspicia seems kinda cheap to me. We never got to see her with Aquisitions Incorperated.

Skirts of Snakes is a sorcerer, the Wild Mage.

Anonymous: Yeah it was a little weird.

Ifryt: Thank you, I fixed it! I had a lot of trouble with her. I couldn't figure out what her name was until the end of the episode. I thought it was "Scared of Snakes" for quite a while.