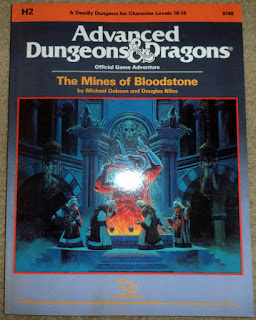 I bought another print on demand product from DrivethruRPG. I reviewed one of these products already, but I wanted to see how a module would turn out in this format.

I chose The Mines of Bloodstone in part because those bloodstone adventures are very pricey. Looking at ebay, the original version of this book sells for $15 - $35. This was $9.99.

Overall: I'm about to do a bunch of nitpicking. I'm doing this so you can decide if you want to buy one of these products. I am really happy with this thing and I would definitely encourage anybody to try it. For me, any Planescape book that is available as a print product on that site is coming to my place. 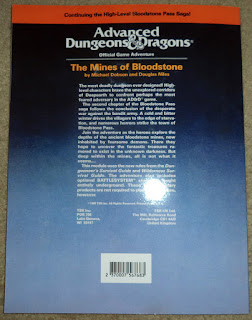 Shipping: First of all, we should talk about the packing. The cardboard box this comes in is nice and sturdy, but they literally just put the book in there with only a piece of paper covering one side. If a mailman shook this box around, it looks to me like the book is definitely getting damaged. I can't believe they didn't put in some kind of protective sleeve. Even wrapping it in newspaper or something.

Scan: The book looks awesome. It is glossy and centered. I did notice immediately that there are light stains on the cover. I assume this is from the cover they scanned. You can see little brownish yellow blotches on the the bottom left of the front cover. There is also a grease spot right on the red border.

These are very tiny things, but I assume some people will care about it.

On the back cover, there's some scanned wear. The book they scanned had some little white spots between the lines of the promotional text. They're tiny, but they're there.

Easy to Fix: Here's the thing about these issues. Anybody who has used photoshop and knows what the clone tool is can fix this in 15 minutes. It would be simple to do and it would make the book look flawless. I don't want to be reminded that I am buying a book printed off of a scan of the actual book. 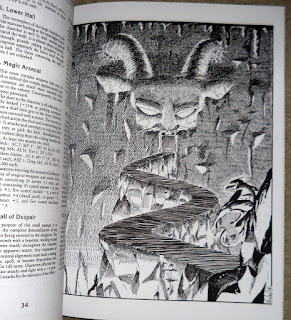 Looks Great: As for the interior, there's something really cool about an old product that is freshly printed. I've seen most of the books before, but I've never seen them in as-new condition. In a lot of ways, these look better than the originals because the paper is of a higher quality.

On one of the last pages, there is a color map of the Valley of Bloodstone. It has almost a glow to it. It looks really good on this paper.

For the most part, this book is centered. In the planescape book, some pages were off-center and the text was obscured by the central binding. That is non-existent for the most part in this book, except for the map right in the center. 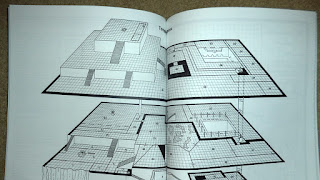 That's the map of the temple of Orcus. You can't make out the whole center of it because it is so far in the binding.

I don't know this, but I assume this was a pull-out map. It's too bad they couldn't make this map and some of the others removable or separate, too.

Good Stuff: As far as gripes go, that's it! I am extremely happy with this book and the Planescape book I bought. I've been using the Planescape book constantly. I feel really weird using original Planescape books because they're a bit fragile and most of them are worth a fair bit of money. It is awesome to have a printing that can hold up to the rigors of play. 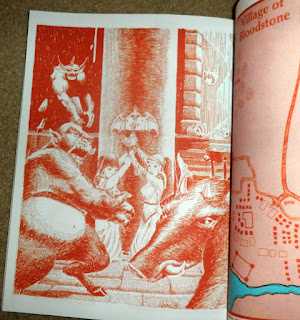 So what's the deal with this adventure? This is part of the fabled Bloodstone series, which is a fondly-remembered string of modules. Nobody says it's great, but they do say it is a lot of fun. One of these bloodstone adventures actually purports to handle "100th level PCs."

These adventures use the old mass combat rules (Battlesystem) in parts. I think that they are pretty much the only adventures to mix battlesystem into a D&D storyline.

Hordes of Monsters: The final area has a really gigantic battle for the heroes. It's not mass combat but it looks like it could be. The group fights 74 creatures, along with a Nalfeshnee and a Marilith. There's more but I don't want to completely spoil it. That is a really crazy final encounter, but at 18th level even 5e PCs can take out a lot of monsters at once with certain spells.

It really does seem like a fun adventure. The whole thing deals with Orcus and the group will bump into him in at least one point.

Cool Rooms: The tarrasque is in this. My mind is boggled. There's a "wall of annihilation" in a really cool room. The heroes might run into the demigoddess of the nixies. She's so attractive that you might literally die from the pull of her incredibly high charisma.

War: The Battlesystem portion is totally optional. The group can lead an army of gnomes against a duergar army. The duergar are protecting the temple of orcus that the group need to get into.

Let's Get Married: The adventure definitely encourages the group to become the rulers of the village of bloodstone. There's a lot of material involving a marriage between the current baron's daughter, Lady Christine, and a "fighter with a high charisma." At the very end there's a big boxed text that describes the wedding.

Maybe my favorite part of all in this book is two pages dedicated to the villagers. One has NPCs, each with a unique gimmick or personality. The other page has a random villager generator that is full of names for you to use and more.

This adventure looks really awesome. Maybe someday I'll get to run it.

Dungeon Fantastic did a great review of this adventure right here.
He reviewed the first in the bloodstone series, too. I assume he's going to do all of them!
Posted by Sean at 5:22 PM

That map was indeed a pull-out map. I did a review of this one on my blog the other day.

This isn't the only series to use Battlesystem - I14 Swords of the Iron Legion used (or could, anyway) and the Dragonlance series had at least one module that came with a battle, map, and counters. The H series includes it because it is a Battlesystem series set of adventures. So while, as you say, it's somewhat optional in this module, it's ridiculously hard to sneak past the druagr but not too hard to defeat them in battle. And if you don't, you're poorly set up for H3.

Peter V. Dell'Orto: Your reviews are awesome! I added a link. I think if I was going to run this I'd do the duergar thing, but it would be more a story thing - a backdrop or obstacle that the heroes must get through. This is a really crazy adventure. I like it!