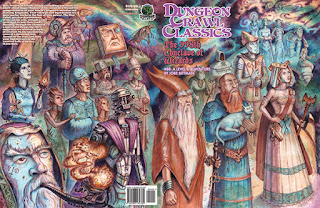 In 2014, I ran a DCC RPG campaign in the game store. I wrote summaries of it on the DCC RPG forum and there were a few times that the people who wrote the adventures I ran would respond.

That campaign was a roller coaster. A few of my players really hated each other. The adventures were very good, but the campaign ultimately got dragged down by the group chemistry (or the lack thereof).

The people who make DCC RPG are awesome. At one point, they sent me a box of free stuff completely out of the blue.

Wizard Jamboree: Towards the end of the campaign, I made up an adventure based on art in the DCC RPG book. I had the heroes attend a secret meeting of a wizard society. In it, wizards from previous adventures showed up and I created zany wizard NPCs based on DCC RPG art.

The wizards would have spell duels, trade spells, collaborate on projects, have big wizard meetings, argue about stuff, that sort of thing. I tried to form something of a continuity out of the previous adventures and put it all together.

I thought it was a good idea and I considered pitching that as an adventure, but I didn't. A year later, out came The 998th Conclave of Wizards.

Who knows, maybe it had nothing to do with me. I love the idea that it did. This thing is huge and packed with stuff. The author, Jobe Bittman, did an incredible job. In some ways, I think that this is the very best DCC RPG adventure ever made.

Prior to this, Jobe Bittman wrote one of the best DCC RPG adventures ever - The One Who Watches From Below. In fact, my group loved that one the most, by far. 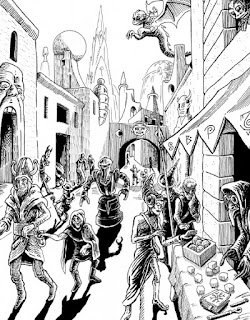 Bryce Lynch likes to say that DCC RPG has a reputation as being a "con-game." As in, people only play this game at conventions. I hope that's not true, because you can run a hell of a campaign with their adventures. They have about 10-15 adventures that are, in my opinion, as good as it gets. If you string them together, you will have an absolutely epic campaign.

This adventure is loaded with stuff that you can use for your D&D campaign. If you use the Forgotten Realms, you could use this material for the Arcane Brotherhood, a wizard faction that I know nothing about.

I think the main thing to know about this adventure is that it is overloaded with good ideas. I am going to talk about some of them, but I don't want to spoil the whole book. There is a lot of stuff in here that really got me excited.

First off, the cover is great. It depicts many NPC wizards who are members of the conclave.

The Star Cabal: A wizard society that has become a shadow of its former glory. Lots of squabbling. Members include, or included, 'famous' wizards who have their names on DCC RPG spells like Ekim from Ekim's Mystical Mask.

The group is invited to join the Star Cabal. But to do so, you must submit to challenges three!

The group needs to find a tower in an extinct volcano deep in "malarial marshlands." I think you could get malaria in them. The tower is a giant crystal. The heroes need to get past a "Prime Tentacled Horror."

It turns out that the giant crystal is a vessel that takes you into outer space. It brings the group to an asteroid city protected by a magic bubble. The city is called Ciz.

Robots: I think this will be the main sticking point for some people. This adventure has sci fi stuff in it. It is very easy to get rid of, but I imagine that some people might be turned off by it. There is a robot wizard and the city guards are robots.

The Star Cabal runs Ciz "...using it as a mobile base of operations in their epic battle against the awakening elder gods."

The city is full of "...star merchants, itinerant wizards, and thrill-seekers from across the cosmos."

We get some really great charts to make up aliens, alien names and pidgin phrases.

Prisoners of the Cube 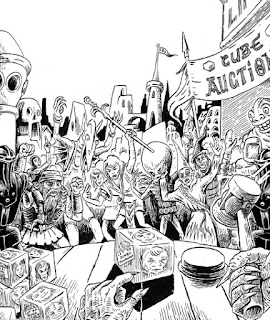 This is the greatest thing I have read in a long time. I am going to steal this idea and put it in my game so fast you won't believe it. I literally stopped writing this review to jot down the cube details in my campaign notes.

Cubism: There is one punishment for all crimes in Ciz. You are put into a condensed cube of solid matter. And then... people buy you! That is so great.

Cube Auctions: The cubes are sold at judicial auctions. Wizards can "decube" the prisoners for a modest fee. "Bidding wars have been known to erupt over prison cubes tied to crimes of passion as families and other interested parties vie for the chance to mete out their own justice..."

Indentured Servitude: There is an unspoken social contract that the prisoners must be an indentured servant for a week.

Cube are also sold in the market. A merchant might say that his cubes are all full of good people caught in unfortunate circumstances and that they will make good hirelings.

You can do so much awesome stuff with this it makes my head spin. I can't wait to use it! 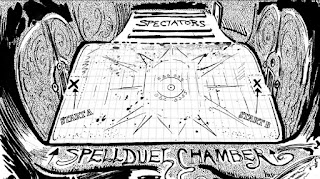 The group will be adventuring in the city a bit. My favorite stuff:

Dastardly Villain: There's a chart of random encounters. My favorite: "Your pocket gets picked by an alien cutpurse in a top hat."

Another Random Encounter: Someone hands you a note that says "Pure intention is the currency of heroes."

The Planar Clock: There's a clock tower with a magic, hovering clock that rotates slowly. Instead of numbers, it has celestial runes. It has 5 hands, one of which goes backwards. It tells what time it is in different realms

The Mausoleum of Shared Experience: This place holds the brains of dead wizards. You can put a drop of their spinal fluid on your tongue and ask 1-3 questions of the wizard. This is another idea that is getting wedged into my campaign right now.

They list 8 magician brain, one of which is Emirikol. This is weird because Emirikol is alive in Emirikol was Framed.

Members of the Star Cabal: The two that I like the most are the wizard with the three-eyed cat and the wizard who has a magic ring on every finger. He actually grew a sixth finger on each hand so that he could wear more rings. 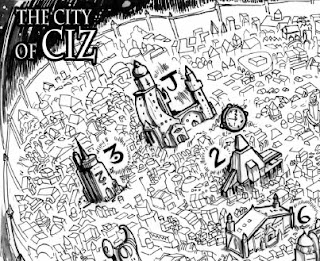 Amidst all of this stuff is an adventure. The wizards are all competing, trying to find an artifact called the Baton of Perpetual Light. It was in the possession of a wizard named Reynard, who disappeared.

The adventurers will explore some wizard towers and ultimately go to a weird realm to face a very powerful bad guy. I don't want to spoil it, but it is pretty cool.

Also, they fight "terrordactyls," which makes me laugh.

I should probably note this. I HATE this advice:

If that is too small to read, what it says is that there is a major plot point in this adventure that is not determined. They want you to get your players speculating on what is going on and then steal their ideas.

In my experience, if you do this, players figure it out and they stop trusting you. They clam up in crucial situations, afraid to talk strategy in front of the DM, because the DM has shown a willingness to use their own ideas against them. The game takes on an adversarial vibe.

If I am running a game and a player blurts out an awesome idea, I stop the game and ask them, "Do you want to do that? I really like that idea." Then we go from there.

I love this module. There is a ton of useful stuff. This is pretty much a city supplement and an adventure at the same time. They really squeezed a lot of content into each page without making it feel like a chore to read.

This is not one you can pick up and run. You need to read it first and plan a bit. This adventure has a lot of charts, which will grind the game to a halt if rolled at the table.

I think if you were to run this, you should pick stuff off of the charts in advance and have them ready. So, make some aliens, choose some random encounters and flesh them out a bit, pick out a wizards tower, that kind of thing.

This adventure is great and if it sounds like your thing, you should definitely check it out.
Posted by Sean at 7:18 AM

Nice review. The adventure sounds very Dying Earth-like, like a misadventure for Rhialto and his buddies.

Sounds awesome! On another note what are they 10-15 adventures you'd recommend?

It was this adventure in particular that made me want to try a DCC/5e hybrid game, simply because it is so awesome. Alternatively, I could mix it with the White Star game that came out last year to steal the wonderfully simple spaceship and technology rules. That would be an extremely cool fantasy/sci-fi setting.

And, by the way, this is still my favorite gaming blog. Your content is amazing.

Very much after the fact...

I think using player speculation is great, but it shouldn't be done all the time, and I think you should be relatively open that it's a thing you're willing to do. Essentially you're involving them in story writing after a fashion.

It would be dumb to make things nastier or harder because of their comments, though. That wouldn't work at all.