Dungeons & Dragons - A Guide to the Infinite Staircase 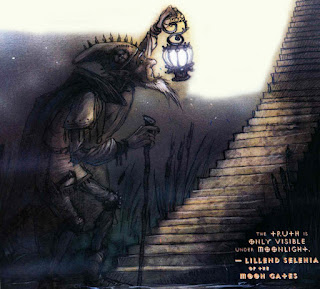 This is a guide to the Infinite Staircase, a location that has appeared in a number of D&D products over the years. The point of this is to give DMs an overview of the place as a campaign reference. I'm going to talk about the 5th edition material up front, and then go back over all of the old stuff.

The Staircase is a really fun way to send your heroes to other planes and it is also an awesome adventuring location all its own. It really feels like a great way to send low level heroes on planar adventures.

Most of the information on the Staircase comes from a Planescape adventure by Monte Cook, called Tales From The Infinite Staircase. You can buy it here.

In the 5th Edition Dungeon Master's Guide on page 58, we are given some basic info on The Infinite Staircase:
It's very interesting that this was included in the core DMG. Chris Perkins has hinted that the things put into the core books are clues to upcoming adventures. Maybe we'll get a plane-hopping adventure that uses the Staircase within the next few years...?

Here's the basic stuff you need to know to use the Infinite Staircase in your campaign.
AD&D 2nd Edition

Tales From the Infinite Staircase 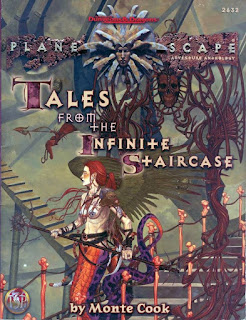 This book contains all of the base information for the Staircase, as well as a pile of loosely-linked adventures. There's this entity known as The Iron Shadow that is draining creativity in the planes, and our heroes need to stop it. It's a very loose storyline, and a portion of it is left up to the DM to resolve however they see fit.

Origin of the Infinite Staircase: It grew out of the Gates of the Moon in Selune's palace on the Plane of Ysgard.

Beginning an Ascent: The staircase appears as a spiraling silver stairway entwined with ivy. The first landing is 1,000 feet overhead. The landing is a 200 foot disc with other staircases extending off - each staircase looks different and is made of different material.

Duration: Travel times between landings can last from hours to one or two days.

Flying: Flying works as long as you stay close to the stairs. If you fly 25 feet or more away, you might pass through an invisible fold that causes the flyer to appear in some random plane with no way back. Those lost in this way are never seen again. 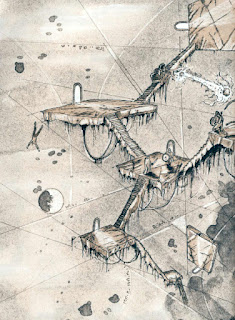 Falling: If you fall off a landing or stairwell, you plummet 10d100 feet before landing on a stairwell.

Landings: These are all different sizes. Every landing has a door, which could be anything from an open archway to a metal vault door.

Doors: Many doors open into cellars or abandoned buildings. Usually the people in that plane don't even know the door is there.

The book actually lists a few doors and where they go to:
Unstable areas: There are some parts where steps are missing, or the staircase is in danger of collapsing. There are also unstable magic zones, where there are weird effects: 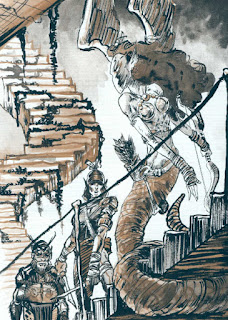 Encounters: Heroes can run into all sorts of beings on the Staircase. Here's some from the book:
Magic: Magic doesn't work well in the staircase. In general, wizards need to have special keys called runes to cast spells, Runes need to be inscribed on spell components. There's a different rune for each for each school of magic. The Staircase affects certain spells:

Einheriar: These are spirits employed by gods who are servants, warriors and guards. They appear as wispy humanoid warriors, resembling humans. They are usually fighters, but they are also often wizards, thieves or priests. Their alignment varies.

The Gates of the Moon: The Staircase is linked/based out of Argentil, the palace of Selune, goddess of the moon and stars. The palace is on a rocky island lit by a nearly full moon. Selune is a god, so "..anyone stupid enough to enter the Gates of the Moon seeking to attack, steal from or even spy on Selune is instantly and automatically destroyed..."

Argentil: A silver palace guarded by a lone silver golem that can breathe poison gas that kills you if you fail your saving throw.

The mood of the denizens of the isle (lillendi and "shards") there goes from friendly to brooding with the cycle of the moon. The Infinite Staircase is only accessible during the full moon.

The Shards: They look like human women, but they are made of moonlight and flame. They are very moody. Shards are chaotic good, are immune to fire and they can see in darkness. Shards can cast burning hands, light, darkness, faerie fire and dancing lights.

Their headquarters is a large landing with tents and buildings. They welcome strangers, feed them and give them a place to sleep. Here's a few of the main members:
Joining the Guild: You have to pay a yearly due of 10 gold. Dues increase as you gain levels.

This is an AD&D Second Edition adventure set partly in the Forgotten Realms. The heroes must rescue a goddess named Waukeen, who has been captured by the demon lord Graz'zt. To get to Graz'zt's Abyssal Layer, the group needs to use the Infinite Staircase.

The heroes step through a magic mirror and emerge onto a silver staircase. They'll meet a lillend named Cattariina, who can tell them about the Infinite Staircase. After a day of traveling, the group comes upon an interesting place..

The Nowhere Inn: A community of tents and temporary structures on a wide landing. It holds a collection of roving merchants and misfits. If the group sleeps here, they may find some of their stuff has been stolen from a thief who is now long gone. Here's some places and people at this location:
The heroes will eventually come to stairs of black stone, which is dirty and cobwebbed. The door on the landing bears the insignia of a six-fingered hand. It opens into a dead-end alley in an Abyssal town, where a blue sun hangs overhead. Our heroes can now enter into Graz'zt's triple realm and seek out Waukeen.

The material in this book is shockingly similar to the 2e stuff. We learn a few cool things. Here's a quote:

"Here and there other staircases come into view, some of which appear to be upside down or at odd angles to the traveler's perspective. All are part of the same massive expanse, which bends and folds in on itself in a manner unperceivable by the traveler but no less real because of it."

The book gives us a list of Abyssal locations that connect to the Staircase:
Travel from one landing to another takes 4d12 hours, halved if the group has a guide. For every six hours of climbing, a PC must make a save or become fatigued.

Not too much info. In general, the Staircase seems to get a blurb. It's never been overly-detailed and I think it's full of adventuring possibilities. At the very least, it's a cool place to use for session or two.

For more on The Infinite Staircase, check out mimir.net. They have lots of cool ideas and NPCs here.
Posted by Sean at 7:14 PM

Great overview! Thanks for your work.