Adventuring in Eberron: The Bag of Beans 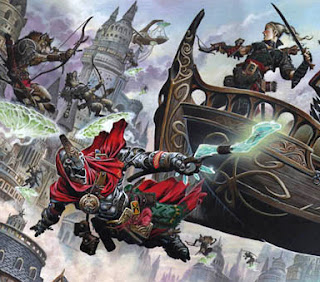 Today I just want to write a little bit about a campaign that I'm playing in. We played last Saturday and it was really good.

My Sunday group wasn't able to meet, so we'll finish Nemesis next Sunday. I haven't gotten Curse of Strahd in the mail yet but it should come soon. 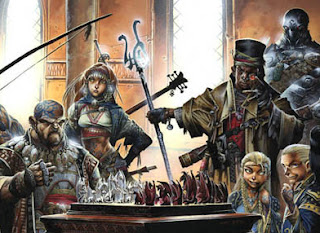 So for the past 18 months or so, I've been playing in a 5e Eberron campaign run by my friend. We play once a month. We're about to hit sixth level.

One nice thing about this campaign is that I know absolutely nothing about Eberron. It is all new to me. Honestly, I find the whole thing pretty confusing. I can't keep all the organizations and merchant houses straight.

The DM has basically planted a pile of mini-adventures in the city of Sharn (which I love), and our group kind of picks and chooses what we want to do.

The overall story involves the deck of many things. The cards are scattered throughout the city. Apparently two rakshasas who might be "Lords of Dust" are doing this for some reason.

Each session is better than the last, and the one we just did was really good.

The Bag of Beans 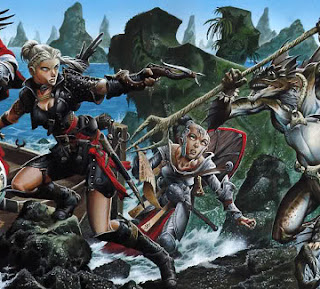 When we sat down, the DM said in advance that this session might be a little loose and we should feel free to do whatever. He has a little baby so the guy has his hands full.

My character is a big, hairy guy (like Indiana Jones' friend Salla). He drinks and carouses all the time to try to forget the events of the Last War. He piloted an elemental airship and it crashed. My character is jolly and he likes to make friends with everybody.

So we're in this dungeon area and we found some kind of demon corpse. Once we fully explored the room, I decided it was time to use my bag of beans.

A bag of beans is a magic item. I have 7 beans. I plant a bean in the ground and a minute later a random thing happens. I roll on a chart from the DMG that the DM has. I have purposely not looked at this chart because I love random charts and I want to be surprised.

So my bean sprouts a statue that looks like me and keeps insulting me. My allies decided to tip it over. It shattered, dust swirled and took off down the hall. I got the feeling this dust cloud was somehow related to the demon corpse thing.

We talked for a minute and realized that we should go get a hireling to help us handle these weird rooms and traps. 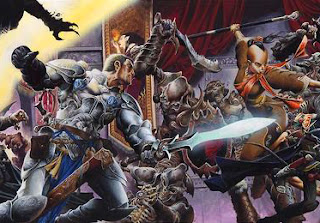 So up into the city we went. We selected three NPCs and each character came up with a different test. The NPCs had to:
We scored the NPCs and the winner was a goblin named Swack.

We gave him an official uniform: A big droopy hat, a one-piece jumpsuit/pajamas with buttflaps, gloves, goggles and a backpack loaded with all that weird dungeoneering stuff (ten foot pole, spikes, etc).

The DM rolled on the NPC charts in the DMG. Our little Swack had:
He was an intense little dude.

So we go back down into a dungeon we were exploring. I found a secret compartment in an altar. I could see it was magically trapped.

The party fighter asked Swack to go handle it. I told him he didn't have to, but Swack's eye started twitching and I got out of the way.

Swack opened it, and poison gas hit him right in the face. He died.

We sent hams to his wives (he has two wives, it's a goblin cultural thing) and went to the cemetery and buried him. 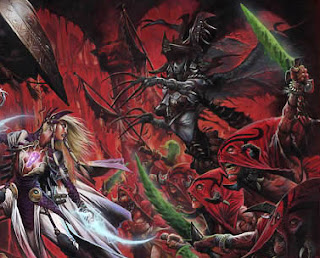 After some discussion, the group decided it wasn't too disrespectful to plant a bean from the bag of beans on the fresh soil atop Swack's grave, so that's what I did.

Lo and behold, a GEYSER OF WINE exploded out of Swack's grave. I quickly filled my canteen with it. I've decided we will drink Swack's wine to celebrate once we've assembled the deck of many things.

At this point we were laughing quite a bit. We knew what we had to do - get another hireling! 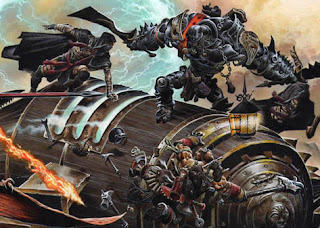 Three more NPCs were recruited and they too went through grueling tests of skill and wits.

The winner was Jenny, a human woman (with an Australian accent) who had braided hair. Some of her traits:
We gave her her droopy cap and buttflap pajama/clothes.

We went to go talk to a priest at the Church of the Silver Flame for a quest. There were a lot of plants outside. I knew what I had to do.

After chatting with the priest, we stopped on the way out. I planted a bean. I had to know what happened! 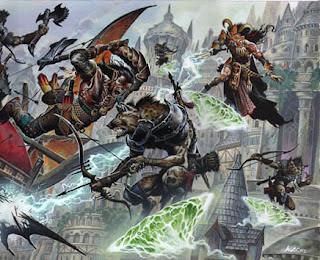 Suddenly, 5 pink toads appeared. I got excited, because I am trying to build a mermaid aquarium in our base and the pink toads are a great addition.

I was wary, though. I wanted to use mage hand to move them into my handy haversack.

But the group wanted our new hireling, Jenny, to touch them. So she did. She touched a pink toad and it immediately transformed into a grizzly bear! We did battle with it.

I realized that this might be my only chance to wrestle a bear into submission in Dungeons & Dragons. I had to try. You know what happened? That bear immediately pinned me to the ground and beat the bejeezus out of me. I was at -3 hit points within 2 rounds!

Thankfully the group killed it and healed me. The other toads vanished.

Let the Players Do Their Thing 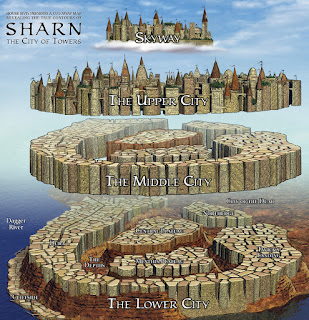 It was an awesome session and it reminded me for the millionth time that the best sessions are when it feels like the players are in the driver's seat. We had freedom to do as we pleased, and it was very enjoyable.

It helps that his sessions are 6 hours long. Mine are only 2, maybe 3 hours. The thing about letting the players take the reigns is that it generally eats up a lot of time as the players discuss options.

In a "railroad", you can get a lot done because we're just going from encounter to encounter. There's not much exploring or dead ends or extraneous interaction with NPCs.

I'll definitely try to run my games more like this one, though, because I really enjoyed it.
Posted by Sean at 11:58 PM

Awesome! You’ll have to let us know what happens with the remaining beans. How can I get my hands on that table?

Coffeemate: The bag of beans table is in the DMG page 152. Thanks! If the next session has good stuff in it I'll probably write about it again.