You can watch this episode right here on youtube.

Check out the Dice Roll Analysis here. Nate rolled the first critical hit in combat in the entire campaign?!

Welcome to the recap of Episode 2 of Dice, Camera, Action! I'm going to give you a summary of what happened, provide timestamps for what I think are the most interesting parts, and then I'll give my general thoughts.

A Valuable DM Aid: I think that the best thing about this stream is the fact that when I watch it, I feel like I can run it for my group. I could definitely run the opening of this adventure without reading the book.

I think any DM who has the time can watch this and learn not only what happens in the adventure, but they also get to see how Chris presents it. The stuff with the mists and the wolves in particular is going to help me out when I run this.

Last Time: The heroes entered Ravenloft and went to a tavern. They learned that a vampire named Strahd is terrorizing the local populace. They just went to the home of Ireena, who has two puncture marks on her neck...

The Waffle Crew (aka Waffleloft)

Our viewing screen has been reconfigured. The background changes from one Curse of Strahd image to another. The NPC art shifts throughout the session and someone is writing jokes on them, which I get a kick out of. Looks like they accidentally tagged Paultin with Diath's name and class.

We learn that Strahd has visited Ireena twice in the night. She is not a full vampire, but she's on her way.

Her father is in a coffin, surrounded by wilting flowers. He "died from fright." He needs to be buried in a consecrated area.

The heroes agree to take the coffin to the church and bury him. Ismark, Ireena's brother, warns the group that they avoid the church because they hear a lot of screams coming from it. The church is run by a priest named Donavich. Ireena puts on armor, grabs a sword and picks up the coffin.

The group carries the coffin to the church. Along the way, Paultin jumps on the coffin and plays a tune. This music attracts wolves in the mist. The mist begins to swirl around the heroes.

The doors to the church have claw marks on them and have been scarred by fire. Evelyn bravely enters.

Never Speak the Name of EssPants

A young man under the floorboards of the church yells out, "Father! I'm starving!" It's Doru, Donavich's son. The priest is behind the altar, praying/weeping. Strix gives him a snack - a cracker possibly dotted with pocket lint.

The group steels themselves and heads down into the basement. Doru is indeed a vampire spawn. Interestingly, Evelyn immediately moves to smite him. She is a paladin, after all.

Battle Against a Vampire Spawn

We get our first attack roll of the campaign. Evelyn charges the vampire spawn and rolls an 11 (+6 to hit, so 17 total). With divine smite she does a total of 26 points!

For the majority of this battle, Jared rolls extremely poorly. He keeps throwing his dagger, missing, picking it up and throwing it again. The DM's dice were on fire. He made almost every save, nullifying most of the spell attempts.

The vampire spawn tries to run up the stairs and out of the building to escape the onslaught. Paultin casts discordant whispers. Evelyn rolls a natural 1 and misses. Strix hits it with a ray of frost, slowing it down.

The spawn tears into Evelyn (critical hit, doing 13 damage!). She is bloodied from a single swipe.

Up the Stairs: Covered in ice, the vampire spawn tries to run up the stairs. Diath rolls, picks up his dagger and throws it in "one badass motion." The poor guy misses again.

Strix cast chromatic orb and injures it. The vampire spawn ascends the stairs. Paultin slices it, but his weapon does not affect it. Evelyn hacks into it with Lightfall.

Strix is dismayed to see that the vampire spawn's wounds are healing due to regeneration.

Jared rolls so poorly that he is sucked into a dark realm where shame reigns for all eternity: 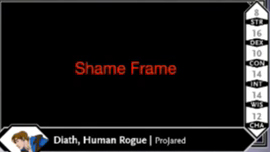 Out of the Church: The spawn is upstairs and ends up impaled on Ireena's blade. With the blade still stuck in it, the spawn runs out of the church. Paultin hits him with more dissonant whispers. Diath chucks a flaming flask of oil at it, which hits and also dispels his shame cloud.

Strix teleports using Misty Step and chases the vampire spawn, who is still on fire. A wolf bites her leg to try to trip her up. Paultin hits it with whispers and then Diath runs up and hacks into the wolf, rolling the first natural 20 in combat of the campaign. He kills it in one shot.

Into the Mists: The vampire gets away, with Ireena's sword still stuck in him.

The group gets to burying the dead dad. Then they look around and see they are surrounded by about 24 wolves. The pack of beasts stares at the group with evil eyes.... and that's where we end.

Next Week: Chris is not sure how the heroes will get out of this one. He wants the players to come back next week with an iron clad plan. 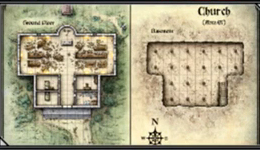 Enhancements: I love the new screen and all the funny stuff they did with it. The changing images and the jokes gave the game an extra layer of fun.

Pets in D&D: It's funny, it seems to always happen. Pets always get forgotten in D&D. We see neither hide nor hair of Juniper or Stinky. I know it's only been one session, but it's almost like a tradition. I can't tell you how many times I was running a game and the group suddenly realizes that they have a goat with them.

Anna is Great: Anna is pleasant, she is a natural leader, and she roleplays her character extremely well. In fact, as far as roleplaying goes, I personally think she is right up there with the best players I've ever seen. It felt like she really carried the group to an extent this week. She doesn't seem to know her stats very well, but we got a glimpse of her Player's Handbook and it had a whole bunch of tabs in it. That means she probably takes time to do character work between sessions and will likely be up to speed on her paladin stuff shortly.

Dice Rolls: I can't think of anything that could be done about this, but it's too bad there isn't some way for us to see everyone's die rolls. I suppose they could put some kind of dice roller on the screen, but I prefer real dice to computer stuff.

Subdued: The Crew was noticeably more subdued this week. I'm not sure why that is, but it definitely felt different this time around. We got to know Jared a little better. He seemed to come alive during the combat. In general, he seems very level-headed and could be the guy who will keep the plot moving forward when necessary.

All in all, it was a decent session. The group did not get to the tarokka reading, which is a bummer. It will be very interesting to see how the cliffhanger is resolved.

Click here to proceed to the summary of episode 3.
Posted by Sean at 3:11 PM

I'm thoroughly enjoying this series! It's always a pleasure to watch Perkins DMing.

What's funny, though, is that somehow Doru saving against Dissonant Whispers worked in favor of the party! On a failed save, the creature has to use its reaction to run away from the caster. Since they were chasing it, if Doru failed, he would get even farther from them!

Also, this is the first time I commented on your blog, and I must say how thankful I am for all you've written so far, since I recently started DMing 5e. I read up all the reports from your Tyranny of Dragons campaign, and them the ones from PotA as well, and many other articles. Your blog is a gem! It's now permanently open on my browser.

Luciano Petersen: Haha wow, I didn't know that about dissonant whispers. Thank you for the kind words, I am honored! I was reading over the tyranny of dragons reports the other day, it was a pretty fun campaign. I still have a bunch of drawing that Dark the Dragon Sorceress did for me.