The Great Modron March - Mysteries of the Dead Gods

Last Sunday we played through a special session of the Planescape campaign. I wanted to use material from a Planescape article by Monte Cook in Dragon issue 240, "Mysteries of the Dead Gods."

The article is full of charts containing things that you might find on the giant stone god-corpses that float in the astral sea. I figured that would make for a cool session and would be a buffer that would allow us to wrap up The Great Modron March and put some space in before we start "Umbra" next week. 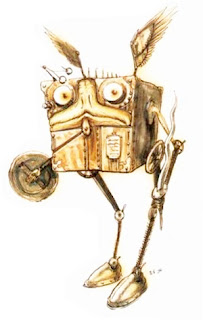 The adventurers were in Acheron. They made their way through the portal to Mechanus along with the few surviving modrons of the march. They found a portal back to Sigil with the aid of some magic and their planar compass.

The heroes returned to their office in the Clerk's Ward. They had to deal with a few things: 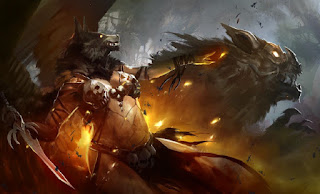 They had stolen this in the Abyss and agents of Lamashtu were trying to get it back. They worked out a deal with a very successful, tremendously wealthy business man named Gonard Flumph. He's a rip-off of Donald Trump. I've been working on a Trump voice the past few weeks, as I find him to be very amusing.

Flumph owns lots of real estate, he owns a fragrance called "Achievement," and he runs beauty pageants in gate towns such as Tradegate and Ecstasy. He sat down with the heroes and Vrischika and entered into a tremendous negotiation while the heroes had the best meal of their lives.

Basically they traded the painting to him for a couple of properties. One was a home for Vrischika, who realized she needed a safe domicile after the solamith attacked her in the Curiosity Shoppe.

The heroes were given a choice. Basically this was me giving them a chance to own a business, so we can mess around with the "running a business" downtime rules. Our heroes now own a "festhall" called... "F***Haus.

There's an umlaut in there, but I don't know how to make it. Their talking cat Jysson is going to run it when they are out of town. They'll do the hiring next session.

The Heart of the Lady of Pain 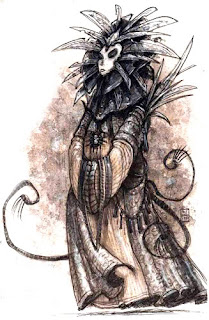 Bidam wants to build a magic heart for the Lady of Pain, who supposedly has a void where her heart is. The void is said to be the source of all pain in the multiverse.

The heroes went back to Undermountain to consult with the drow Paellistra. They gave her the evil, sentient sword Craggis in exchange for guidance. Craggis would be Paellistra's new henchmen, seeing how the heroes had killed her vampire sidekick Cryvistin a few sessions back.

The ingredients for the Heart of the Lady of Pain:
Godsblood can be obtained by mining the corpse of a dead god. And so, the heroes were off to the astral plane. 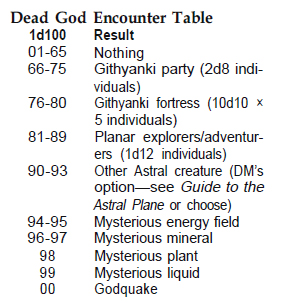 Their magic pirate ship can fly in the astral plane thanks to the lifejammer helm on board. They brought along Alamandra the githzerai and her boyfriend Stewart Seven-Fingers.

I cooked up four dead gods. In my campaigns, I've had probably a dozen gods die, so I had a nice list to choose from. I won't bore you with all the details - most of them are former characters who became gods, or gods slain by heroes in one way or another. Each god-corpse shares some of its memories with the heroes when they land on it. Here's how it went.

Goddess of the Wamphyri: Wamphyri are super vampires from Brian Lumley novels. This goddess died in a campaign from the 90's that my friend ran. On this corpse, the heroes found plants that could be used to make potions of giant strength. The heroes also encountered some warder devils lounging in a pool of milk. Bidam made friends with them. No godsblood on this dead god.

God of War: This was a character from a 90's campaign who became a god and then was eventually slain by a level 30 character from my Scales of War campaign in 2010. The heroes found ominous markings and signs - githyanki planned to build an outpost here. The heroes mined some metal good for making magic weapons. They also found a pool of water that never freezes, no matter the temperature. No godsblood, though. 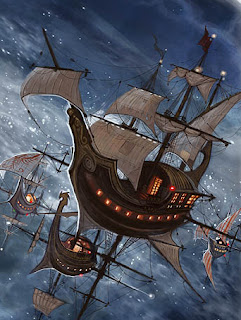 Wamphyri demi-god: The wamphyri were a big deal in our campaigns back in the 90's. This particular dead god was actually once a character who betrayed the party. It was a pretty legendary thing in our group. Bidam and Theran had to endure a lot of peril here - madness-inducing memories, an energy field that turned Bidam lawful evil for a day, and plants that were poisonous to the touch. They were also attacked by a two-headed couatyl. These creatures were created in my Savage Tide campaign, another long story.

Goddess of Magic: That's right, Ioun died in my campaign, slain by the evil god who made his own "Shadow Pantheon" of zombie gods (in the campaign I ran last year). This god-corpse let me put all of my research on ioun stones to use.

The heroes found a pulsing node of energy, only able to be mined by magic items. It also exploded. Luckily, the heroes were smart and figured this out (they had come upon a blasted crater earlier). They safely mined the node, and harvested three Ioun stones:
The adventurers actually gave the invisibility one to Alamandra. They also found.. godsblood. Mission accomplished! 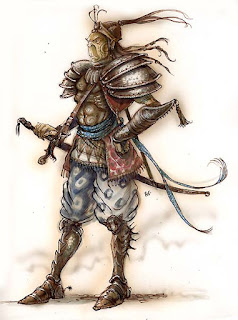 Unfortunately, on the way back, they were attacked by a few githyanki on an astral skiff. The heroes set their skiff on fire. Ultimately, a githyanki warrior flew onto the deck of the ship while the burning skiff fled. Theran flew after the skiff, and killed both the mindslicer and the hracknir on board.

All in all, it was a good session. I love it when I can mine the history of my own games in a useful way. Next time, we will begin the highly regarded Chris Perkins adventure - Umbra.

Proceed to Umbra here.
Posted by Sean at 6:23 PM

What was the stats of the wamphyri demigod they killed....can you please post it?please send to paoutt197444@gmail.com..... would like to include it in my own campaign as a high level to awaken it....