Dungeons & Dragons - A Guide to Yeenoghu 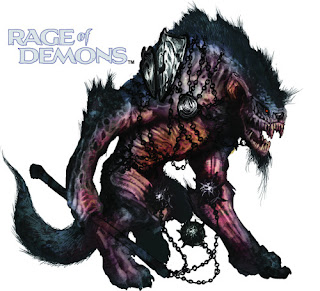 Out of the Abyss is going to be out soon, and wizards of the coast has been releasing material on each of the demon lords involved in the adventure each week. I figure that now is a good time to jump in and get a good look at them so we can be fully prepared for Rage of Demons! Today we're going to tackle Yeenoghu, demon lord of gnolls.

The point of this is to collect all of the lore in one place so that when you use Yeenoghu, you will know all of the basic concepts and you can pick and choose what fits your game. 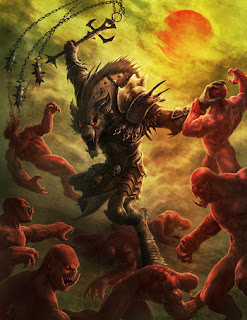 From what I can tell, Gary Gygax just made Yeenoghu up. There are a few fun tidbits about the creation of the demon lord.

James of grognardia relates an amusing urban legend that ultimately turned out to be false:

"In any case, I once heard a story about the creation of Yeenoghu by Gary Gygax. The story goes that players in the Greyhawk campaign, having run afoul of one too many demon lords and archdevils whom they accidentally summoned by speaking their names aloud, got into the practice of using circumlocutions to avoid repeating past mistakes. One such circumlocution was "You-Know-Who." After a while of doing this, Gary sprang Yeenoghu on his players, on the assumption that his name sounded enough like the phrase that he might answer by traveling to the Prime Material Plane." 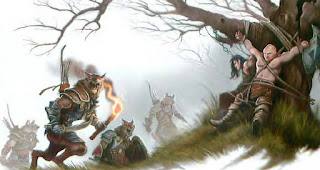 Here's the basic stuff you should know when using Yeenoghu in your games:
AD&D 1st Edition 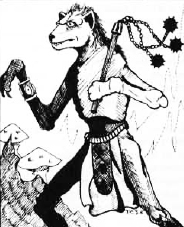 It is said that Yeenoghu is one of the most powerful demon princes. He's 12 feet tall, has a hyena head, is thin to the point of being skeletal. He has dead grey skin and his body hair is "...a mangy crest of putrid yellow from his head to his mid back".
He has a triple-headed flail with chains of adamantite. When he attacks with it, you roll to hit for each of the three spiked balls. Each ball does something different:
Dragon Magazine #63 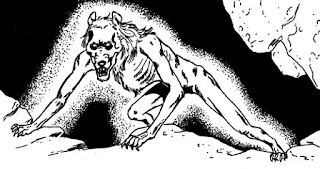 Gary Gygax wrote an article about how Yeenoghu created a special form of undead, called the Shoosuvas. It is believed they are incarnations of the spirits of Yeenoghu's greatest shamans.

The most powerful gnoll shamans have an amulet that can summon a shoosuva for aid. It appears as a huge, emaciated hyenadon, glowing with yellow light. Those bit by it are paralyzed. While paralyzed "...only the most basic life functions will continue."

It's also said in this article that any gnoll shaman or witch doctor can call on Yeenoghu for advice.

Manual of the Planes

Yeenoghu gets a blurb in the section on the Abyss. From page 102: "Yeenoghu's great mansion is the size of a city. It rolls across the barren salt-waste of his layers, pulled by slaves and controlled by gnolls." 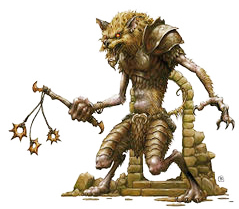 In 2e, Yeenoghu is detailed in Monster Mythology. Those old blue DM books are my favorite things to flip through to this day.
D&D 3rd Edition 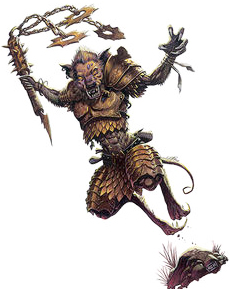 Yeenoghu is detailed in Fiendish Codex I, another one of my favorite all-time D&D books.
Yeenoghu is in eternal war with Baphomet. Nobody remembers why the war started, but it continues to rage.

Doresain: We get details on how Yeenoghu conquered the ghouls. Doresain, King of Ghouls, was a vassal of Orcus. He had his own layer of the Abyss, which Yeenoghu invaded and conquered. Doresain swore fealty to Yeenoghu. Apparently Orcus is busy and hadn't noticed yet (Doresain is back at the side of Orcus in 4e). 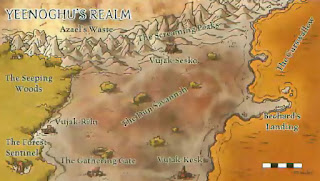 Yeenoghu's Realm: It's the 422nd layer of the Abyss. It was once a desert dotted with ruined cities, ruled by a fallen angel named Azael who was chained to a plaza. Then a god-killer known as Ma Yuan showed up and killed him. The desert is still under Azael's influence - Yeenoghu hasn't taken control of it.

Yeenoghu lives in a mansion that is pulled through the layer by thousands of kidnapped slaves. Once per year, the palace takes a trip around the layer. 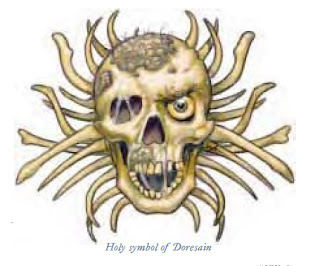 There's a quick mention in this book that Doresain paid homage to Yeenoghu for a time. Then "...Yeenoghu subsequently lost control of the King's layer, and more recently, Yeenoghu has lost the ability to command the King." 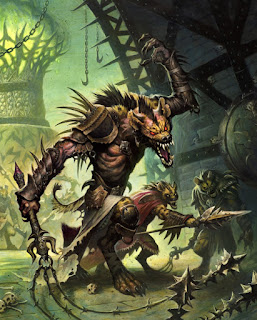 Yeenoghu got the deluxe treatment in a massive article in one of the first free digital issues of Dragon Magazine. Yeenoghu has "..few ambitions beyond the visceral thrill of rending the soft flesh of his enemies and drinking deep the hot blood from their bodies."
Nezrebe, Exarch of Yeenoghu: Nezrebe is an albino gnoll that stands 9 feet tall who wields a magic sword called Winnower. He suffers from a disease that causes him to cough up bloody chunks of his lungs.

Nezrebe hates elves, and hunts them. He has a special chamber set aside for torturing elves. He even crucifies elf slaves to mark off lands under Yeenoghu's control. He spends his time outing minor demon lords who try to encroach on Yeenoghu's plans.

We are told that there are three cities in Yeenoghu's Realm:
Demonomicon

There's not much on Yeenoghu in here. I guess they figured the Dragon article covered most of the bases. There is a page on followers known as "Yeenoghu's Death Pack".

"The weakest of his faithful are treated as slaves, but those that can prove their mettle and their battle madness to Yeenoghu can rise high in his service."

They have an array of special powers. They can do damage even on a missed attack, get bonuses to hit when an ally is slain,  give allies bonus damage to a target, that kind of thing. 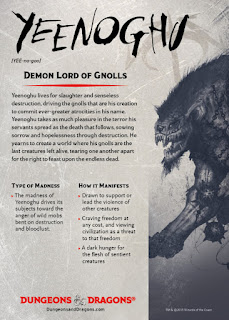 So far we only have the flyer that wizards released. Yeenoghu "...yearns to create a world where his gnolls are the last creatures left alive, tearing one another apart for the right to feast upon the endless dead."

In Out of the Abyss, apparently each demon lord inflicts a type of madness. Yeenoghu's brand of madness "...drives its subjects toward the anger of wild mobs bent on destruction and bloodlust."

The madness will make the victim view civilization as a threat to freedom, and give them a hunger for the flesh of sentient creatures.

The 4e article is right here on the wizards site for free.
There's a really well done expansion of Yeenoghu on AuldDragon's AD&D Blog
Chamber Band wrote a song about Yeenoghu
Posted by Sean at 10:00 AM

Interesting note about Doresain: I believe this is in the Monster Manual for 5th edition but before Doresain was the king of ghouls he was an elf. As an elf he was devoted to the elven gods but Orcus swayed him into his control until he ate a bunch of elves becoming the first ghoul. A bunch of years passed and he served Yeenoghu (I didn't know that, thanks) as well as Orcus until (assumedly during the events of E2-The Kingdom of Ghouls) he is attacked and calls on Orcus to aid him, but Orcus does not answer his calls, so when he is killed he revokes Orcus and begs to the elven gods for forgiveness. Evantually they grant him their forgiveness and as a gift grant all elves immunity to the ghouls bite. Which is why elves don't need to make the save against the ghoul's paralysis.

We have a couple new pieces of Info about Yeenoghu in the Monster Manual and DMG.

It is unknown who Doresain will currently be serving. The monster manual says that Doresain was a vassal of Orcus, until Yeenoghu attacked his layer. Doresain had no way of winning and called upon Orcus for aid. Orcus did not care and did no aid him. Doresain lost faith in Orcus and appealed to the Elven gods who he had abandoned to become the first of Orcus' ghouls to save him. The Elven Gods took pity on him and saved him from Yeenoghu's wrath. Doresain as thanks for being saved made elves immune to to the bite of ghouls. It is unkown if he went back to Orcus or went with Yeenoghu the one who conquered his layer.

The other info about Yeenoghu in the Monster Manual is more or less the same stuff we known, but the DMG brings up some new stuff.

Yeenoghu's layer has a name now. It is called Death Dells.

"Death Dells. Yeenoghu rules a layer of ravines known as Death Dells. Here, creatures must hunt to survive. Even the plants, which must bathe their roots in blood, snare the unwary. Yeenoghu's servants, helping to sate their master's hunger as he prowls his kingdom seeking prey, capture creatures from the Material Plane for release in the Gnoll Lord's realm."