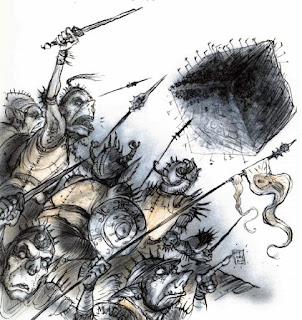 We finished up The Great Modron March tonight. It was pretty awesome. 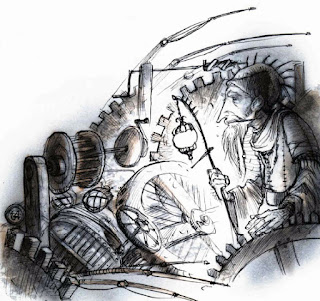 I was worried we wouldn't finish on time, so we got right into it. The hook for this adventure is that there's rumors that the modrons have created an artifact containing all kinds of forbidden knowledge. It's called "The Modron Crucible." The heroes are sent by Vrischika to find out if it is real (it isn't), and to try to get it from the modrons.

The Plane of Acheron 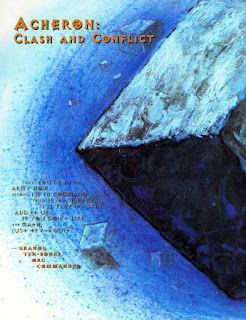 The march had passed into the plane of Acheron, which is this plane where there's all these giant cubes. The cubes crash into each other once in a while. All sorts of creatures live on the cubes. There's one cube that is full of orcs and goblins who are at war with each other.

The adventurers headed to the gate town of Rigus where they had to wait a week before they were allowed to use the portal. They passed through and began following their map, walking over a sea of dead orcs and goblins.

Their journey would take them through a few portals, sending them from one cube to another. This route would eventually catch them up to where the modron march was. 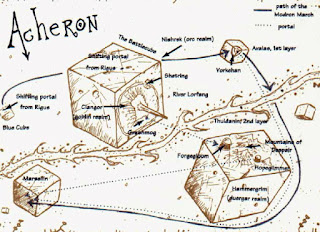 The heroes came to a goblin city called Grashmog. They were not allowed in unless they wore special magic bracelets (the bracelets allowed the goblins to paralyze them with a command word). The heroes weren't sure what the bracelets did, and flatly refused to put them on. They were kicked out.

The heroes decided to try to sneak in to the city, but it was a fiasco. Their sneaking rolls were about as bad as it gets (I believe it as nothing but natural 1's and 2's). When spotted, they killed a pair of goblin guards swiftly and hid the bodies.

They tried to sneak some more... more bad rolls. They'd been spotted outside the temple where the portal was. The shaman in the temple decided to humiliate them. In the adventure, it is said that the shaman won't let the heroes pass through the portal until they proclaim the greatness of Maglubiyet.

So considering how the heroes had been caught sneaking through the city, the shaman decided that they needed to really humiliate themselves, by shouting all the things they'd like to do with and to Maglubiyet.

What this shaman didn't bank on is the fact that these particular heroes have no shame and they will gladly shout anything, even when it involves performing certain carnal acts on the god of goblins. 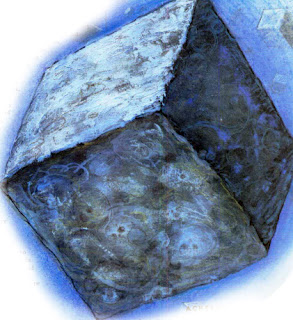 Our heroes passed through the portal and appeared in a duergar city called Forgegloom. They were not harassed. They got a peek at the Idiot King, who thankfully I had read up on. The Idiot King is.. an idiot. He resides in the Hall of Memory, where spirits of ancient duergar kings dwell. When the Idiot King sits on this dark serpentine block, the spirits can possess him and make rulings.

The adventurers thought that this guy was fascinating but they didn't want to get in trouble so they got out of the city. From here they needed to cross the Mountains of Despair to get to another duergar city. I cooked up an encounter for each day:

Day 1: They came across a floating gem. In Acheron, every time a spell is cast, a spell reflection gem appears somewhere else on the plane, containing the opposite spell. Bidam walked right up to it and grabbed it, and received a jolt of lighting. Then it went inert. Their mimir helped explain what it was. 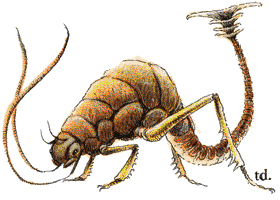 Day 2: The adventurers were on a narrow mountain path. There was a cave. Out of the cave came a four-legged, armor-plated creature with antlers. I didn't say the words "rust monster". Every other time I use them, I can't help but tell my players that this creature is "rust colored" with a big, cheesy grin on my face. Not surprisingly, the players immediately know what they are dealing with.

In this instance, Bidam let it walk right up to him and touch him with its antennae. Bidam's armor began to corrode! The heroes screamed and rolled initiative.

Theran thought for a moment, and tried using the mending spell to repair Bidam's armor. Looking at the mending spell description, I'm not sure if this would work. "As long as the break or tear is no larger than 1 foot in any dimension, you mend it.."

And: "This spell can physically repair a magic item or construct, but the spell can't restore magic to an object." None of Bidam's stuff was magical.

Mending takes a minute to cast and it is a cantrip. So maybe it would take a series of castings to repair the corrosion? No big deal, Bidam was able to get replacement gear at the next city.

Day 3: The heroes were climbing a steep incline and a massive flock of bird flew right through them. Acheron is full of birds like crows and ravens. Both heroes rolled extremely well and avoided a potentially deadly fall. 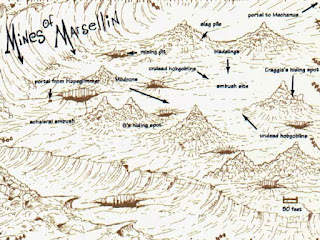 The adventurers got to the final city and passed through the portal there. They'd at last appeared in the Mines of Marsellin.

As soon as they appeared near the mines, 4 zombie hobgoblins attacked the adventurers. They were wearing tabards that depicted a rust dragon. This cube is ruled by a rust dragon named Coirosis.

The heroes made quick work of the zombies and saw an obvious trail. The modrons had recently marched here.They followed the trail and caught up to the modrons. The modrons had started the march with 8,000+ members. Now, at the end, there were only about 100 surviving modrons.

They saw one modron, a quadrone, watching the march while hiding.

This modron was Trictaculus, the rogue who had been forced to be a judge that the heroes freed a few sessions back. He explained that he'd been able to catch up to the march, but that the modrons rejected him. He'd been demoted to quadrone status (which apparently is what happens to all rogue modrons).

In this adventure book, the rogue is not Trictaculus, but a modron named "8." I decided to use Trictaculus to link things together a but more.

Trictaculus said he wanted to leave with the heroes, but then... a massive army of zombies attacked the modrons. Trictaculus then told the heroes if they'd fend off the attack, he'd tell them why the modron march had happened in the first place. 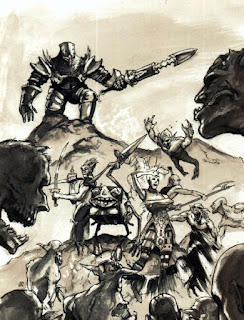 We proceeded to have a massive battle where I threw waves of hobgoblin zombies at the heroes and the modron. Quadrones in 5e have 4 attacks. I gave the zombies just one hit point each, as I like "minions." So basically, Trictaculus was killing 4 zombies per round (he needed to roll a 4 to hit them). The heroes were handling the rest just fine.

Slowly, the waves chipped away at everyone, actually focusing on Trictaculus.

And then the leader of the zombie horde, Craggis, jumped in. Craggis is an evil, sentient sword who animated a suit of armor to act as his "wielder." Craggis serves Coirosis, the rust dragon.

I had foreshadowed Craggis last session, but the heroes didn't pick up on it. Heiron Lifegiver had created this sword and was sort of embarrassed about it.

Craggis waded in and started slicing up the heroes as waves of zombies continued to come. Eventually, Theran was cut down and making death saves. Bidam got dropped too! The bad guys took out Trictaculus and then joined the battle against the modron march.

Theran made his death saves and was stable. Bidam failed a death save, made 2 and then.. rolled a natural 20! Bidam was awake and had one hit point!

He quaffed a potion and revived Theran with one as well. They looked at Trictaculus.. he was dying and no magic could heal him.

I asked them what they wanted to do. They knew Craggis was hurt really bad. He had two hit points left. They decided to attack!

Bidam missed a ranged attack, but Theran hit with a firebolt. The armor of Craggis was destroyed. The evil sword clattered to the ground. Craggis was defeated! The modrons mopped up the zombies as the heroes tried to help Trictaculus.

Trictaculus spoke his last words. He told the heroes that the modrons were marching because their god, Primus, was dead.

The heroes were shocked and wondered who or what had killed Primus. They carefully wrapped up Craggis and stuffed the evil sword in a backpack. They watched as the modrons got back in formation and marched to the final portal. The modron march was over. They had returned to their home plane of Mechanus.

The heroes spotted lots of weapons in the mines among the pile of zombie corpses - including magic items! Bidam got a fancy new sword, and Theran found magic bracers.

The adventurers decided they'd better get moving before the rust dragon sent reinforcements. The heroes headed back to Sigil. 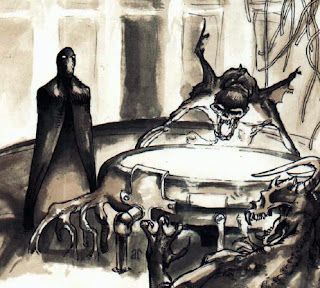 We're done! This is a very good adventure that is full of fun ideas. I have been waiting about 20 years to run this, and it was definitely worth it. To me, the best chapter was the trip through Limbo.

The whole concept of chaos-shaping really made the game come to life. I also really liked the adventure in the Abyss and the final chapter. There's tons of great things you can do with Acheron. You could easily run a whole campaign there.

I think overall this adventure could have used a little more structure. It would have been nice to set up Craggis somehow as the big bad guy. The revelation at the end is cool, but I think the players might want a little more after all they went through.

I also think the adventure should have gone out of its way to make sure the heroes knew who Primus was before the final adventure, as obviously that ties into the big revelation at the end. I had caught this on my own, but it's an easy thing for a DM to miss. This book sets up the other mega-adventure, Dead Gods, so this isn't meant to be the end of the whole story.

Next week we're going to play an adventure based on a Monte Cook article from Dragon Magazine, where the heroes will go to the astral plane and search the giant floating bodies of dead gods. Then we'll play through the Chris Perkins adventure "Umbra". After that, we'll play the sequel to the Great Modron March - Dead Gods.

Check out the next session right here!
Posted by Sean at 9:40 AM