The Legend of Vox Machina Ep. 3 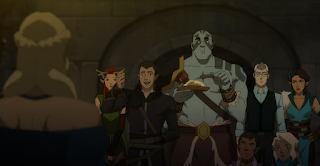 You can watch this episode right here.

Percy is having a nightmare about his past. His wealthy family killed by assailants. His sister running through the forest, shot in the back with an arrow.

He wakes up in the group's new keep.

The adventurers have breakfast together. Allura arrives to remind them that there is a party tonight that they need to attend. Dignitaries from across the realm have come to work out a new security pact.

That night, the adventurers arrive at the party wearing noble garb. Scanlan is wearing a bejeweled codpiece. They check their weapons at the door.

When Lord and Lady Briarwood arrive, Percy is stunned. Percy quietly explains to the group that they are the ones behind the death of his family.

Some of the NPCs at the dinner include:

While the rest of the heroes are at the dinner, Vax is sneaking around. He spots the fellow who drove the Briarwood's carriage. Distracting a pair of guards with a snake wearing an eyepatch, he slips into the room that the Briarwoods are staying in.

At the dinner table, the sovereign discusses Whitestone, and how no one travels in or out of the lands. Lord Briarwood, at the table, basically casts suggestion, forcing the sovereign to commit to leaving Whitestone be.

Vax searches the room of the Briarwoods. He finds a false bottom in a chest containing a book. In it is lore linked to "The Whispered One." Vecna?

Back at the table, Lady Briarwood claims that Percy's family abandoned their people to rot. Percy is seething. After the meal, Percy explains that the Briarwoods murdered his entire family.

The Briarwoods entered their room and find Vax. Lord Briarwood uses magic on him.

Scanlan distracts the party-goers with a song and his glowing codpiece.

Briarwood is a vampire. He bites Vax, who staggers back and then jumps through a window into a pool. The Briarwoods follow.

The adventurers grabs their weapons and run outside to battle the Briarwoods. Pike heals Vax, as Keyleth has a spell countered. 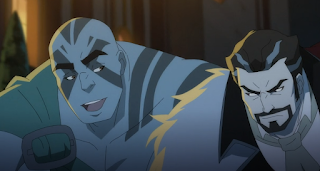 Lord Briarwood's sword cuts into Grog, and it actually grows in size. I am still used to the D&D cartoon... I get shocked every time I see blood in this show.

The group isn't doing so well. Keyleth uses a wall of thorns (which seems to be her go-to spell) to separate the villains from the group.

Percy thought he had them, and accosts the group. Pike's holy symbol seems to be losing power.

Percy points his gun at the Briarwood's driver, a meek fellow who seems to have no choice but to do the bidding of the villains. Percy puts on his plague mask, then actually shoots the driver. Before he can kill the driver, the Sovereign orders guards to arrest the group.

Again, I think that the blue dragon story could have used a few more episodes. This Briarwood story came in very abruptly. I feel like something is missing, but I don't know what it is.

Part of it might be that I don't really have any strong feeling for the characters. They're all pretty funny and distinct, but in general I'm not really rooting for them.

That moment at the end of the first episode, where the group is outraged at the death of the villagers, made me care. But here, when the stakes are more muddled, I have a hard time getting invested.

My feeling right now is that the wackiness outweighs the heroism. The group prioritizes things like punching each other in the balls, rather than adventuring. It takes away from the momentum of the story. There needs to be just a bit more intensity to counteract all of the "magic codpiece" kind of stuff.