Tyranny of Dragons - The White Dragon 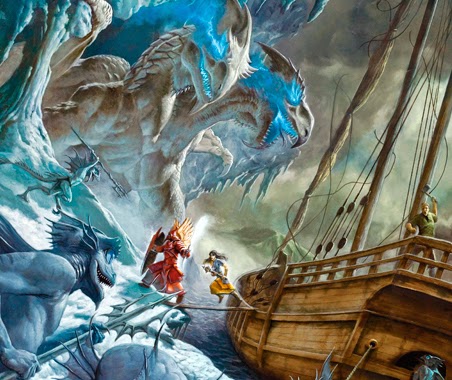 This article is about other people's experiences fighting the white dragon in Hoard of the Dragon Queen. First I will look at how the encounter went down for different people and discuss them a bit. Then I am going to talk about misreading the adventure text and how it affects people's campaigns. 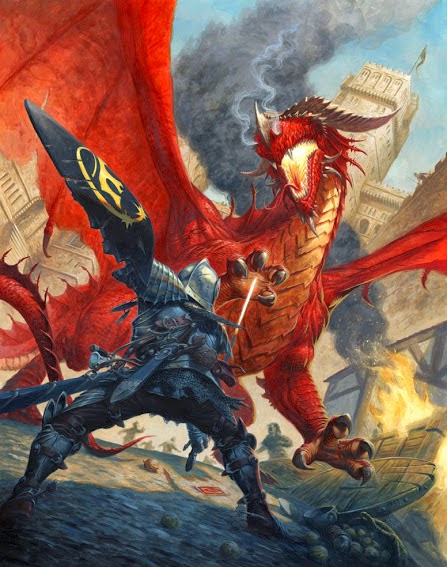 I wanted to use D&D art depicting dragons for this column. I started off by digging up art from my favorites, like Caldwell and DiTerlizzi. But then I started looking at the digital covers from the 4th edition era and realized that I barely even remembered them. This art is almost like a "secret", as I think many people either didn't read them or barely glanced at them. I figured it might be fun to use dragon art from those covers for the most part in this column.

I have been reading online about Hoard of the Dragon Queen. There's been quite a bit of discussion about the final battle against the white dragon, Glazhael the Cloudchaser. Is the dragon too difficult? Are you supposed to use the dragon's lair actions? The lair actions are not mentioned in the text but then again, neither are the monster's stats. In the online supplement, the dragon's stats include legendary actions but not lair actions.

The fight is in a massive cavern. The dragon begins the battle hanging upside down on the ceiling. Glazhael has an INT of 8 and sees people with food as "friends" and people without food as "enemies". It demands tribute and will flee when reduced to 40 hit points (It has 200 hit points total). 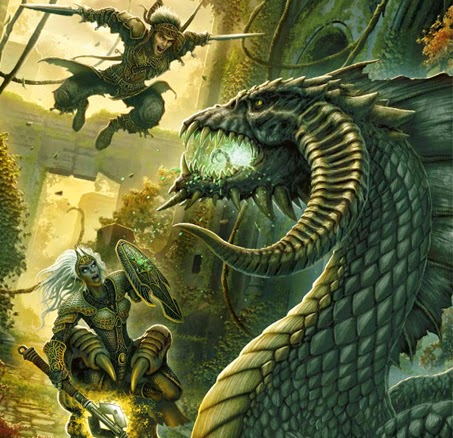 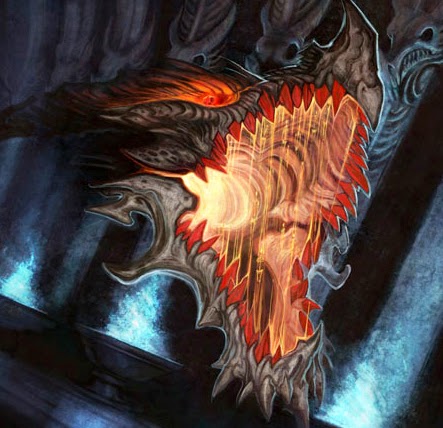 While reading up on other people's experiences with Hoard of the Dragon Queen, I noticed a number of things: 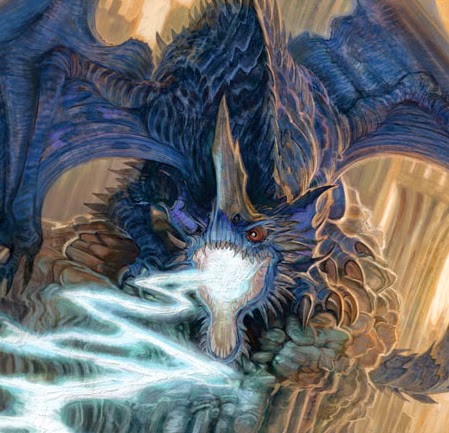 One idea I really liked from one of these campaigns was the idea of giving Pharblex two black dragon wyrmlings. I think I would have given a wyrmling to a different NPC, though. Frulam Mondath? Rezmir? Maybe give Talis the White a white dragon wyrmling? The wyrmling could live on the roof of the lodge instead of those perytons.

I also noticed that despite the Adventurer's League rules, the majority of DMs added encounters and altered the adventure in ways that technically make the game "illegal" for in-store play. Two things that jumped out at me while reading all of this stuff:
Is All of This in Place to Prevent Cheating and Powergaming? 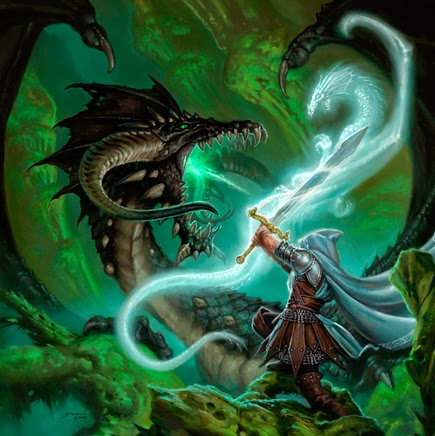 I know that the Adventurer's League rules are in place so that players don't bring "broken" characters to conventions or other game stores. I think that Wizards of the Coast would be better off just declaring that PCs can have "x" amount of magic items per tier, and their stats cannot add up to more than a certain number per tier. If a PC has more items than the stated amount, they can' t access or use them in convention play.

Really the point of all of these rules and restrictions seems like it comes down to trying to stop cheaters and powergamers from ruining public games for everyone else. In my opinion, an easier thing to do is to just kick those people out if they don't understand or accept the spirit of the game being played.

I can't tell you how many cool people over the years that have been repelled from RPGs as a whole due to one powergamer running roughshod in a public game, desperately exploiting rules even though it violates intent and common sense. I have been running public games since 2008, and I have seen it happen over and over. 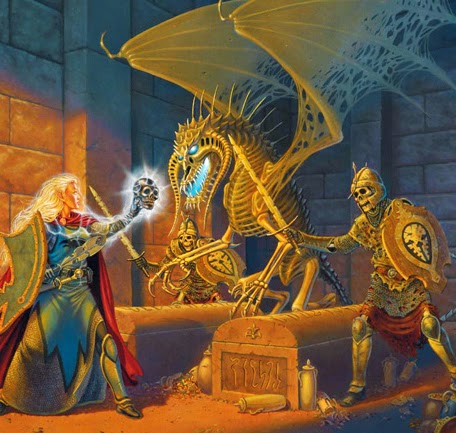 I should point out that when I say "powergamer", I don't mean someone taking optimal character options. If I make a fighter, I want an 18 strength and a high constitution.

I am talking about the people who spend a great deal of time and effort looking for the cracks in the system. They want to exploit the rules to do - what else? - massive damage. They are looking for a video game "cheat code" for a tabletop RPG. Often these people don't know or care that they are being annoying. To them, you are stupid for not doing it.

Nobody wants to sit at a table where your character does 40 points of damage per round when everyone else does 7 points. Everybody else might as well just go home, because you, the powergamer, is all that matters.

Then, when the DM tries to counteract the situation by exploiting your "broken" character's weaknesses (perhaps by throwing a band of NPCs at you using the same extra-attack exploit that you are using), you get angry and bitter. Why, you are being punished for being clever! That's not fair! You loudly complain, and everyone gets uncomfortable. Now they really want to go home. They came here to have a fun time. You came here to "break" the game. Well, you broke it all right.

Maybe a separate league should be created for the powergamers to play in. Is that what the 4th edition Lair Assaults were for? These players could have their own league where they can min/max and exploit rules together to their hearts' content. But here is the really funny thing:

When the powergamers who I have played with decide to DM a game of their own, they don't want powergaming in their game, either! They actively try to stop it, and when they can't, they quit DMing and go back to being a player. I have seen this happen over and over again. None of their campaigns last more than a handful of sessions. The most fascinating thing about this is that when they go back to playing, they have learned nothing and continue to powergame. 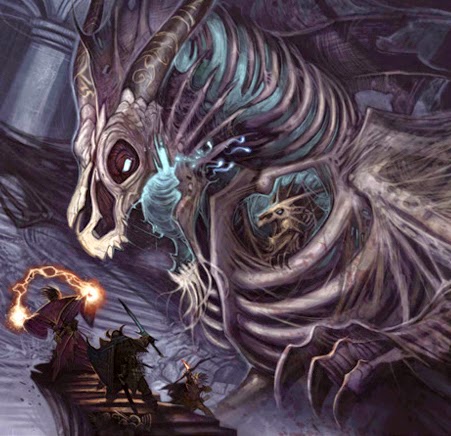 Reading about other DMs making mistakes comes as a great relief to me. I have always had trouble with reading comprehension, all the way back to these tests I had to take in first grade. I was even given an A.D.D. test, which I passed.

A lot of times when I read a book, I just see a wall of text. I'll end up reading the same sentence over and over while having great difficulty focusing my mind.

This may sound like a medical condition, but the weird thing is that when I read something that I am truly interested in, I devour it with no problem. Despite my love for D&D, I hate reading modules, rulebooks and fantasy novels. I find them very boring.

For a time, my father owned a used bookstore. I would sit behind the counter and ring people up. It was a quiet place with classical music pumped over the speakers. The store was almost never busy, which meant I spent my days reading any of the thousands of books we had available. Despite the fact that we had a massive section of fantasy and sci fi books, my choice was to read autobiographies, true crime and stories of real life peril. I have very fond memories of reading these books:
Being a Dungeon Master Is a Multi-Tasking Nightmare 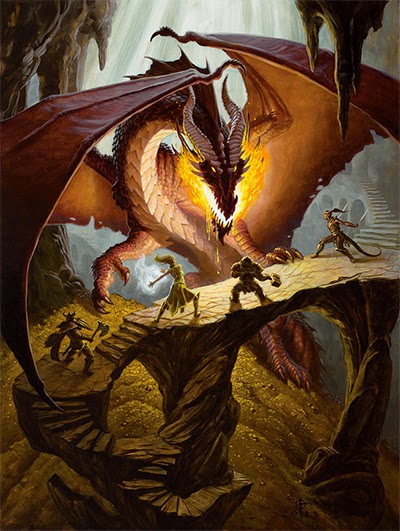 What I am trying to say is that I have always been frustrated with myself when I realize that I missed something when running a D&D session.

For example, despite the fact that I read the adventure, wrote a freaking guide to it, took hand-written notes that I reviewed just prior to running it, I still forgot about the collapsing door/rubble trap in the Tomb of Diderius. I almost had my PCs walk right into the divination pool room and skip over many of the coolest rooms in the dungeon!

I caught it and made up some B.S. second door that collapsed and the group was none the wiser, but I was still flabbergasted that I'd made the mistake.

Through the reading of all of these other blogs (and I think we really need a site that lists all Encounters blogs, as they are very hard to find or stumble on) I am able to see that almost nobody runs an adventure as written. There is no mythical "perfect session" of Hoard going on (though if there is one, Chris Perkins is probably running it).

The very nature of a module having so much detail is inevitably going to lead to oversights and omissions by the Dungeon Master. 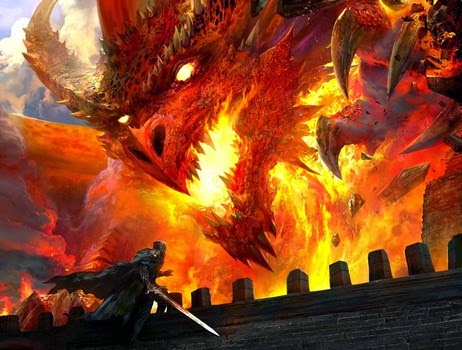 When you run a game, you have five people all trying to talk to you at once. While you are answering a question, two more are being asked. And while that is happening, you're reminding yourself not to ignore the quiet player and trying to make sure everyone is engaged. At the same time, you are trying to check your notes and making sure you're running it correctly.

It is impossible to multi-task to this degree. This is why some DMs are progressing more slowly through the adventure. They take the time to look up anything that needs looking up, to answer each player completely, and to look down and check the book and read over every detail.

As I have said before, as a player I do not like sitting at the table in silence. I am there to play. Let's keep it moving! But now I understand that the drawback to a maniacal pace is that things are going to go a little wonky sometimes.

I am fine with that. I hope more people write online about their experiences playing and running Hoard and Rise, because I greatly enjoy reading them.
Posted by Sean at 2:35 AM

Huh. That awkward moment when you recognize yourself as the "Powergamer." I've done some rule exploiting and I feel kinda bad now. (I could say about how I was trying to balance my character up to the rest of the PCs but that would be just trying to rationalize it. :P)